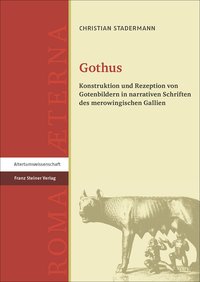 Christian Stadermann has produced an enormous and significant work on the image of the Goths in the Late Antique and Early Medieval Literature from Gaul. This work belongs to a line of German scholarship that aims to analyze "das Bild in Überlieferung": a good example is Andreas Goltz's book on Theoderic (Barbar - König - Tyrann. Das Bild Theoderichs des Großen in der Überlieferung des 5. bis 9. Jahrhunderts, Berlin / New York 2008). Stadermann's work is largely structured according to a similar model: each chapter begins with a detailed introduction to the authors and the sources analyzed in the same chapter before turning to the methodical analysis of the evidence. In the Merovingian literature about the Goths, this evidence consists mainly of legends or traditions, anecdotes pertaining to kings, accounts of battles, dynastical marriages, and events of religious significance. The primary sources especially reference the kingdom of Toulouse, the baptism of Clovis, the Battle of Vouillé and the death of King Alaric II, the murder of King Amalaric, the conversion of the Visigoths to Catholicism under King Reccared and the Third Council of Toledo, years 587/9. The abundant material allows Stadermann to investigate the Merovingian authors' treatment of the Goths, mainly the Visigoths. Merovingian critique centered on the Arianism of the Goths, celebrating the expansion of the Catholic Franks and their establishment in Gaul as a result of their victories against the Visigoth Arians. The investigation necessarily engages with Quellenforschung, because material of late the fourth, fifth, and sixth centuries was reused over and over, though with different purposes, for nearly four hundred years.

Chapter One, the book's introduction, is very well structured and it is solid. This includes the important discussion on the ethnogenesis and ethnography of the barbarians. Following the famous work of Wenskus 1961 and his theory on the Traditionskerne, various scholars (beginning with the Austrian school of Wolfram and Pohl) have taken different positions with regard to this question. Stadermann carefully explains the "Forschungsstand" and with an accurate theoretical frame, he does not omit the works of sociologists.

In Chapter Two, Stadermann introduces the image of the Goths in the Western Roman authors of the late fourth and the fifth centuries: Ambrosius of Milan, Augustine, Orosius, Sidonius Apollinaris, Paulinus of Pella. All of them predate the Merovingian dynasty, and in their times, the Franks were one of the many barbarian tribes moving to the West. However, their voices on the Visigoths are very important, not only because these intellectuals were contemporaries or even witnesses of the invasions and the impact of the Goths on Gaul, but also because they would be largely used by the Merovingian authors. Especially significant is the legacy of Augustine and Orosius. Sidonius's few letters on the Visigoths and on King Euric would be used with propagandistic intent by Gregory of Tours (cf. 117-118, 124).

With Chapter Three, Stadermann enters the world of early Merovingian Gaul, introducing Gregory of Tours, the main historian; Venantius Fortunatus, the most important surviving panegyrist; Marius of Avenches, the most significant author of Chronicles; and finally the hagiography. Topics of recurring interest in the sources receive a detailed investigation: the Battle of Vouillé; the representation of the Goths and their kings as Arian persecutors of the Catholics (see passim, also 258-272); the modality of election of some Visigothic kings. Stadermann shows how the critiques against Arianism generally postdate the events. Fifth-century authors who witnessed the invasions were more concerned with destruction of the territories and other problems of a socio-economic nature, including the coexistence between Romans and barbarians. Religion became a priority, a key of propaganda, especially for Merovingian authors who wrote a few generations after the conversion of Clovis. (A similar tendency can be detected for the history of Ostrogothic Italy in sources produced during or after the Byzantine invasion of Italy). Arianism was still part of the Gothic identity, and a Gothic expansion over Gaul could have been a threat for the Franks and Catholicism. In the various forms of invective, the Goths were even considered as a kind of instrumentum Dei to punish a lack of integrity (e.g. some authors' interpretation of the battle of Adrianople and Emperor Valens's death in year 378). Following the end of the kingdom of Toulouse, the Goths retreated to Spain, and about eighty years later they abandoned Arianism for Catholicism. At this point the religious distinction between Goths and Romans as expression of their identity collapsed (passim, also 282-294). The section "Raum und Identität: Hispanus id est Gothus" is very important (225-247). Stadermann's long and detailed analysis does justice to the importance of the sources. To the reviewer, this Chapter is the strongest one in the dissertation.

In Chapter Four, Stadermann discusses the seventh-century authors of Merovingian Gaul. The main source is (Ps.)Fredegar, whose Chronicon relies on a variety of works including those of Gregory of Tours, although he is much less interested in interpreting the conflicts between Franks and Goths as a war between Catholicism and Arianism, or in reading Frankish history with the lenses of religion. The Appendix to the Chronicle of Marius Aventicensis, the works of Jonas of Bobbio, Audoin of Rouen, and the anonymous Lives of Saints, complement this panorama. Once again the analysis of the sources, especially Fredegar, is methodic and exhaustive: among the main events we find the battle of Adrianople, Alaric's sack of Rome, Attila's invasions, Theoderic in Italy, the battle of Vouillé, the death of Amalaric, Byzantine history and other events from the late fifth to the seventh century. Stadermann does a good job when approaching the psychology of the authors (cf. 362-384). To rewrite or challenge the past was no longer the main issue, and Stadermann is right in his conclusion that "im Gallien des 7. Jahrhunderts kaum mehr das Bedürfnis bestanden haben dürfte, die tempora Gothorum, die Zeit der Westgotischen Herrschaft in Gallien, zu verarbeiten" (415). The final excursus on the image of the Gothic Queens in Merovingian literature is excellent (418-432).

With Chapter Five, which is necessarily shorter, the investigation shifts to the sources produced in the eighth century, in particular the Liber Historiae Francorum (including the question of a double redaction, which Stadermann introduces very well), the Historia vel gesta Francorum, and the Lives of the Saints, many of whom lived in previous generations. And while these sources are also partially expressions of the early Carolingian world, the propaganda does not change the sparse information that these sources contain on the Goths. The image of this people was by then established on the basis of the earlier authors, especially Gregory of Tours. Eighth-century authors relied on the same information (which Stadermann has analyzed in Chapters Two and Three), and they reference the same important events of the establishment of the Franks in Gaul in the late fifth and sixth century: the Hunnic invasion, the conflict between Catholic Franks and Arian Visigoths, the wars of Clovis and Childebert against Alaric II and Amalaric. By this time the Arianism of the Goths was a memory, almost two hundred years old, solidified in the literature. To this Stadermann adds also the sparse information in the Merovingian literature on the eighth-century Muslim invasions, which represent the epilogue of the history of the Goths (471-476). The conclusion to the volume, in which Stadermann returns on the tradition of the sources (477-494), is well done. The long final Appendix (595-636) is dedicated to the Live of Saints and passions: the Quellenforschung is well illustrated and it is very useful for scholars with less experience in the hagiographic field.

On the whole, I believe that this topic has been very well analyzed and the treatment is exhaustive. The author shows excellent knowledge of the Merovingian sources, and he is generally very good in handling the complexity of the Quellenforschung. His work represents a solid instrument for any future research in the field.

A book of this size cannot miss oversights, such as some Latin expressions in the text, perhaps because the author trusts too much the Latin of his sources: gestum memorabilium (199 and 211), caput victoriarum vestram (181), codecilli (180). The lack of bibliography for the years 2014-16, which is announced by Stadermann in the preface at page 11, did not allow him to consider new important contributions on the field, such as for example Eike Faber, Von Ulfila bis Rekkared: Die Goten und ihr Christentum (Stuttgart 2014), and Helmut Reimitz, History, Frankish Identity and the Framing of Western Ethnicity, 550-850 (Cambridge 2015). It is nearly impossible to keep up with the massive continuous production on these subjects, which has greatly increased in the last decades. In this, the reviewer finds himself sympathetic with the author.

The reviewer is however less sympathetic about the total lack of Spanish and Italian scholarship in such an enormous work. The thirty-nine page, 800 title bibliography (546-584), which is meticulous enough to reference Michael Kulikowski's Rome's Gothic Wars in both the English and in the German editions, entirely misses literature in spanish (two titles), and in Italian (four titles, inclusive of the collection of Muratori 1697-1713). Even French scholarship seems underrepresented (ca. 109 titles, inclusive of publications produced in the eighteenth and nineteenth centuries) when compared to the German and English literature. (I do not refer here to the editions listed at 537-546, because the Monumenta and some other series are still standard and contain most of the Quellenforschung upon which this study rests). This is unfortunate, because in Chapter Two Stadermann has shown how relevant the sources from late fourth to early sixth centuries are for the Merovingian authors. Striking is also the lack of Italian and Spanish literature in Chapters Three and Four, where we read in the footnotes quotations from Cassiodorus's Variae, Jordanes, the Excerpta Valesiana, the Liber Pontificalis, the works of Gregory the Great, the sources on Byzantine Italy, and Isidore of Seville, John of Biclaro, the Vitae partum Emeretensium, and the other sources of Visigothic Spain. In addition, relying almost entirely on German and English literature, Stadermann approaches extremely complex and well-studied topics like the end of Roma aeterna (165-172), the eschatological question of the ordo temporum (the World's six ages which goes back to Augustine: e.g. 270, 387), the translatio imperii (see in Chapter Four), the imitatio imperii, and Augustine's idea of bellum iustum. Absent in the bibliography is the name of Bruno Luiselli, the founder of the journal Romanobarbarica, who has provided important philological investigations on these sources, including his almost 1,000 page Storia culturale dei rapporti tra mondo romano e mondo germanico, Roma 1992. The same can be said for the works of Andrea Giardina, the coordinator of the new translation and commentary of the Variae and author of important studies on the end of Antiquity, on Cassiodorus' political activity, and on the genesis of the regna Gothorum (cf. "Le origini troiane dall'impero alla nazione," in Morfologie sociali e culturali in Europa fra tarda antichità e alto medioevo, Spoleto 1998, 177-209). Angela Amici, Jordanes e la storia gotica, Spoleto 2002, would also have been important for this study. (These names represent a very short list.) Stadermann's lack of acknowledgment of this scholarship strongly contrasts with the length of his dissertation and his meticulous analysis. Goths were among the protagonists of the Late Roman Empire; of the gentes they are the most testified in the sources, and in my opinion they are the most significant of the tribes for the history of the Empire between the fourth and mid-sixth century. Stadermann's decision to focus on the literary / representational level should not cause him to omit "nationale Forschungen", which are very important for the reception of traditions. The reviewer hopes that such a lacuna is not motivated by an intentional dismissal of the large scholarship on barbarians and their sources produced by the many historians and philologists of the "Latin Europe".