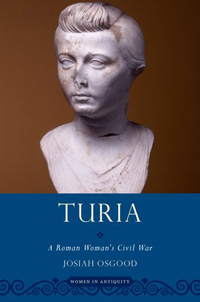 Is it possible to 'read' the history of women in antiquity as anything other than a rhetorical exercise? Do the surviving sources provide opportunities for knowing something verifiably authentic about the life and historical times of women from the ancient world? Drawing together what information we possess about elite women living in the late republic, Osgood addresses these questions by contextualizing a single, extensive, yet still fragmentary funerary inscription (the so-called laudatio Turiae) in relation to the extant literary record (in particular, history, biography, epistolography, legal texts, and poetry) and a spectrum of illustrative material culture. In doing so, he seeks to bring his readers a little closer to understanding what an elite Roman woman could do in the last decades of the first century B.C.E., what actions she was capable of taking in her own right or in the name of her male kin, what kinds of limitations she faced - and how contingent a woman's capacity in this regard was on social custom, cultural expectation, and the interplay of historical circumstance, legal precedent and political decision-making.

A brief prologue outlines the nature and importance of the inscription comprising the focus of this volume - a succinct history of its discovery and translation; an approximation of how the extant fragments should be situated in relation to each other and what elements remain conjectural; and in what ways the laudatio illuminates the position of women in Roman society. What follows is a thematic exploration of the events, attitudes, and practices affecting the subject of the inscribed funerary speech: the impact of civil war on elite Roman families (Chapter 1); the extent and nature of support afforded by women to husbands and male kin otherwise unable to act on their own behalf (Chapter 2); the degree to which elite women came to represent in the civic arena their own interests and those of their husbands and kin by blood or marriage (Chapter 3); the changing nature of marriage and how legislative reform impacted on the representation and reproductive role of women (Chapter 4); the position of women in the lifecycle of the Roman family (Chapter 5) and how the epigraphic discourse of death negotiates boundaries of representation and reality (Chapter 6); the question of who the woman commemorated in the laudatio may be (Chapter 7); and the significance of the inscription's monumentality to our appreciation of how radically the role and position of elite women had changed over the course of a generation (Chapter 8).

What commends this study to the attention of every interested reader - whether they be historians of political and personal relationships in elite Roman society of the later republic, commentators on cultural developments affecting discursive, material and attitudinal representations of women during this period, or even theorists of sexuality and gender in antiquity - is Osgood's ability to identify pertinent, clearly articulated contexts that situate appropriately and explicitly each element of the inscribed text on which he focuses attention. Thus he affords his readers the opportunity to understand what life was like for the dedicand of the laudatio by distilling to their essential ingredients complex and interrelated events, movements and ideas harvested from the surviving evidentiary tradition: the narratives of civil war and dictatorship (49-44 B.C.E.), of proscription, exile and re-settlement (43-27 B.C.E.), and of overarching imperial enterprise (26 B.C.E.-14 C.E.); the phenomena of civic violence and armed rebellion, of public protest by women collectively and pursuit of dynastic and political power by women individually; and the landmarks of marital reform, changes to women's control over finance and property, socially pervasive reproductive and relational legislation, and a new monumental culture. Within the coherently formulated boundaries of these wide-ranging historical, political, social and cultural contexts, Osgood enables his readers to discern the achievements of historical women in the interstitial period between republic and empire - women like Servilia, Terentia, Fulvia, Octavia, Livia, and, importantly, Turia - and how we can better make sense of the extent to which the subject of the funerary inscription conforms to or transcends the public and personal exempla of Julius Caesar's lover, the wives of Cicero, Antonius and Octavian, the sister of Augustus - and, of course, the wife of Quintus Lucretius Vespillo, who, since Mommsen, has been associated (erroneously, in Osgood's view) with the subject of the laudatio.

Osgood concludes his study with two appendices - a chronology underlying his reconstruction of the commemorated woman's life; a Latin transcription and English translation of the extant inscription (drawing in particular on the work of Mommsen, Durry, Braund, Flach and Cooley) - as well as endnotes keyed to individual chapters, a selective bibliography, and a brief, general index of names and subjects. In all, this volume sheds invaluable light on the most extensive extant Latin inscription set up to memorialize a funerary speech for a woman. By exploring such a lengthy residue of the epigraphic record, contextualized so usefully with reference to the pertinent literary tradition testifying to the lives of Roman women, Osgood succeeds in expanding traditional perspectives on the social positions and attitudes of the commemorated Roman woman and her unnamed commemorator as well as our knowledge of the experiences and attitudes of elite Roman women and men living during a period of significant political and social transition.