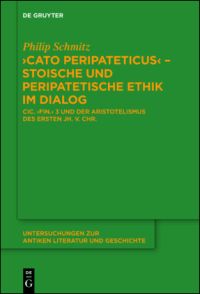 The interest in Cicero's dialogue De Finibus Bonorum et Malorum (a title notoriously difficult to translate) is ongoing [1]; Philip Schmitz's book Cato Peripateticus (a slightly revised version of his 2011 doctoral thesis) constitutes an important contribution to the study of the dialogue. The epithet ascribed to Cato (the spokesperson for the Stoics in the dialogue) points to the interpretation that Schmitz favours: The Stoic account in De Finibus 3 (and more specifically the theory of oikeiosis expressed there) bears influences that may be traced to the Antiochean account in Finibus 5 and in other Peripatetic authors as well; more specifically, in the Peripatetic doxography that survives in the second book of Stobaeus' Selections under the name of (Arius?) Didymus, and in the Peripatetics Xenarchus and Boethus, for whom evidence survives in Alexander's Mantissa.

Schmitz supports this thesis by meticulously analyzing the most important sources pertaining to the Stoic-Peripatetic debate on oikeiosis. It is an additional merit of the study that the most important evidence is cited with the accompaniment of an extensive apparatus criticus, which makes the comparison of alternative readings an easy task. This is particularly useful for the study of the excerpts from the Peripatetic doxography in the second book of Stobaeus' Selections.

Schmitz embarks on his task by introducing Cato's account in De Finibus 3 as one of the most important sources surrounding the Stoic notion of oikeiosis (which Schmitz translates by "Zueignung"). Schmitz does not question the (early) Stoic origin of the idea of oikeiosis. Still, whereas, Schmitz notes, most scholars have focused on the influence exercised by the Stoa on the theory of oikeiosis developed by later Peripatetics, such as Antiochus and (Ar.?) Didymus, an influence in the opposite direction has gone largely unnoticed. Cato's account in Finibus 3, so Schmitz, can be taken as evidence for this Peripatetic influence.

In chapters 2 and 3, Schmitz traces Peripatetic influence in two points of the Stoic account, in particular: a. at the beginning of the account of personal oikeiosis (Cic. Finibus 3.16-19) and b. at the part treating the so-called social oikeiosis (ibid. 62-73). With regard to the former, Schmitz juxtaposes Cic. De Finibus 3.16 and the 'orthodox' account in Diogenes Laertius Book 7.85, which draws explicitly on Chrysippus and his work On Ends. Schmitz points to the fact that whereas the source in Diogenes presents oikeiosis as a cosmic process with nature acting as a subject, Cicero moves to the use of the middle-passive oikeiousthai which obscures the role of cosmic nature. This seems to be indeed an important difference between the two accounts, although a reconstruction of the argument in the 'orthodox' source of Diogenes Laertius would help to highlight better where exactly the difference lies.

Schmitz, persuasively, traces an important Peripatetic influence in Cato's account in the use of self-love (se diligere) as the starting-point of impulse in living beings; the expression is striking because it imports an affective component where the Stoics only talk about an hormetic one. Following the lead of the later Peripatetics Xenarchus and Boethus (in Alexander's Mantissa 151.1-13b), Schmitz relates self-love in Cato's account to Aristotelian remarks on philautia in Nicomachean Ethics Book 9 (esp. 1166a1-2). Still, as Schmitz notes (33) the relationship of the virtuous man to himself to which Aristotle refers in Book 9 of his Nicomachean Ethics is not identical to the love of self exhibited at the beginning of one's life as an outcome of oikeiosis, and thus, even if the idea is of Peripatetic provenance, it has been adjusted to a new context. In the following pages, Schmitz traces important parallels between the objects of oikeiosis in the Peripatetic doxography in Stobaeus and the account of Cato at De Finibus 3; this, according to him, results in a 'richer' account of Stoic oikeiosis, which stresses the continuity between the first stages of life and the strongly normative state of human perfection.

In the case of social oikeiosis, Schmitz argues that there is a Peripatetic influence in the transition from the love of parents towards their children to the idea of an affiliation towards the common fellowship of humankind, which is sketched at Finibus 3.62. The missing steps in Cato's account are, according to Schmitz, to be found again in the Peripatetic doxography in Stobaeus where it is argued that fellowship towards others is to be sought for its own sake on the basis of the irrefutable love of parents for their children. [2] The idea seems to be that if one's own children are loved for their own sake, then all different people we are associated with are (and should be) loved for their own sake as well (albeit in differing degrees of intensity). However, the fact that the examples cited in the Peripatetic doxography find close parallels in Cicero's On Appropriate Actions [De officis] 1, which relies on Panaetius [3] for much of its content, poses a challenge to Schmitz' thesis that Cato's speech reproduces exclusively Peripatetic material with regard to social oikeiosis. [4]

Less convincing is Schmitz' claim in chapter 4 that the Peripatetic treatment of oikeiosis helps to "bridge" the gap between the personal and social aspects of oikeiosis, or put more bluntly, between egoism and a moral outlook. The Peripatetic account by associating oikeiosis with different degrees of affinity of our own self towards other human beings [5] seems to allow a partial stance; the Stoics on the other hand by grounding our oikeiosis strictly in reason may better defend an impartial outlook. If this is true, then the introduction of Peripatetic elements into the Stoic account could make the connection between the two aspects of the Stoic oikeiosis theory more difficult rather than easier.

Chapter 5 brings together evidence from later authors, and, more specifically, the late First Century BCE Peripatetics Xenarchus and Boethus, which survives in the so-called Mantissa of Alexander of Aphrodisias. The chapter helps to illuminate the way these Peripatetics attempted to construct an Aristotelian understanding of oikeiosis as a relationship towards oneself, which forms also the basis of our relationship with others (the so-called social oikeiosis). The chapter contains important and persuasive insights, but it could profit more from a comparison between the view attributed to Xenarchus and Boethus and the idea of self-love in the Antiochean account at Finibus 5.

At last, chapter 6 compares the evidence from De Finibus with the so-called first doxography of the Epitome of Peripatetic ethics in the second book of Stobaeus' Selections. Schmitz analyses the key concepts in the first part of the epitome, which uses, similarly to Antiochus, oikeiosis as a foundation for ethics, and makes some astute remarks with regard to the similarities between the two (especially with regard to the relationship between the category of what is 'choiceworthy for its own sake' and oikeiosis).

All in all, Schmitz' monograph makes an important contribution by drawing attention to the fact that the Stoic account in Finibus 3 may not be straightforwardly treated as the canonical account of Stoic oikeiosis. This has important consequences for the reconstruction of the 'original' Stoic argument. Most importantly, the study shows us the subtle ways in which the exchange between Stoics and Peripatetics shaped the philosophical landscape in the First Century BCE. Schmitz' book suggests that the philosophical appraisal of this exchange may bring very fruitful results.

[4] Here, Schmitz could argue that the teaching of Panaetius bears also Peripatetic influences, but that would need to be argued for separately.