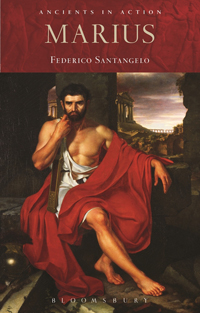 In this short book, part of a series which seems designed to offer semi-popular treatments of notable writers and historical figures from antiquity, Santangelo has set himself two aims: to narrate the life and career of Marius and then to attempt to set him in his historical context.

I detected some slips in the narrative itself. It was not Marius himself but another officer who asked Scipio Aemilianus at Numantia who might succeed him (8). It was Sulla not Marius whom Bocchus thought to betray to Jugurtha (41). Censors do not confer citizenship (70). [1] Further the location of Vercellae is not completely clear. The text offers Vercelli or the neighbourhood of Ferrara (53) but only the former is shown on the map (X).

I would not regard Santangelo's attempt to fit Marius into his historical context as successful in every respect. He makes Marius' abandonment of the census qualification at the time of the Jugurthine War the natural consequence of progressive lowering of that qualification in the previous century but fails to observe that this theory of lowering has recently been challenged. It may be, too, that not enough emphasis has been placed on the view that capite censi were absorbed into the prevailing military ethos. Landless and landed, seeking the same objectives, simply cannot be distinguished apart. A gratuitous reference to Mussolini and an emphasis on the troops' desire for booty means that, although Sulla's constitutional position is recognised, the significance of what he did in 88 is blurred. He politicised the Roman army abolishing, in effect, the difference between a civil and a military contio. Imitated by Cinna and Caesar, he convinced his men the enemies of Rome could be fellow Romans. We should note, also, the sharp division between the generation of Marius and the next. Only in the time of the Triumvirs did loyalty to a commander of doubtful legitimacy override that to the state. [2]

Santangelo dogmatically asserts, ["]Great man history is not in favour and rightly so["]. However, in writing a biography of Marius, it seems to me that Santangelo has indeed produced history of this type, given that his chosen subject dominates the book. The largely uncontroversial narrative of the well-known facts of Marius' career makes the book suitable for what the author says is its primary use, in the classroom. The attempt to assess Marius' career, informed partly by recent scholarship, can be pursued further by its intended audience with the help of a bibliography which, though large, has some significant omissions.