Josiah Osgood: Rome and the Making of a World State, 150 BCE-20CE 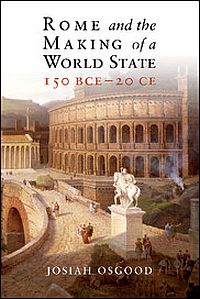 Osgood's new book is a survey of the period of the late Republic and early principate aimed at a general readership. It thus includes helpful guides to further reading at the end of each chapter, lacks distracting footnotes (thus keeping the pace of the narrative brisk and bracing), keeps references to ancient sources to a minimum (confining them to a selective "Sources of Quotations" list, 259-64), and is furnished with a helpful index. This does not mean, however, that the book lacks a strong, central thesis; it most certainly does. Across its fourteen narrative and thematic chapters, Osgood argues that after 150 BCE, "a more ambitious provincial administration was being developed, along with a more coherent vision of empire" (3). This contrasts with much Roman historical scholarship, which adopts the dark vision of Sallust, Tacitus, and other ancient writers, that the Romans of the late Republic were "disreputable gangsters"; instead, Osgood sees them as "inspired innovators" (i).

Osgood's choice of chronological termini is unusual, but important. Instead of employing a standard end-point for a survey of late Republican history (the assassination of Julius Caesar, for example), Osgood elects to take his account down to the early years of the emperor Tiberius' administration - a period he calls the "long 'fall of the Roman Republic'" (3). He does this because he wants to highlight the positive developments that took place during this time - innovations in commerce, religion, and literature; the establishment of the pax Romana; fair and efficient provincial government; the spread of Roman citizenship; and the process of "becoming Roman" (the process formerly known as "Romanization") - instead of fixating on the negative aspects of Roman domination.

Osgood's introduction frames the narrative that follows in terms of Keith Hopkins' thesis that the influx of imperial wealth into Rome resulted in structural changes in society, such as the creation of a more politically engaged equestrian order. Roman society adjusted to the new reality with great difficulty: the Italian allies thought they deserved more recognition for their contribution to Roman power, and the urban poor of Rome thought they deserved a greater portion of the fruits of empire (in the form of grain at a fair price, for example). Meanwhile, the Roman failure to maintain international security generated crises overseas, allowing individual senators to fill the breach and establish virtual fiefdoms for themselves. Osgood's focus in the subsequent narrative is on how the Romans developed solutions to these problems.

Osgood begins with two snapshot chapters. Chapter Two is a comprehensive survey of the state of the empire, and its various crises, in the mid-second century. He rightly notes that Roman foreign policy was "often totally opportunistic, aiming for maximum power at minimum cost," by "demanding obedience" while "commit[ting] as few military or financial resources as possible" as well as by engaging in diplomatic sharp practice, such as favoring the boy-king Antiochus V over his cousin Demetrius, a vigorous young man of 22, as the successor to Antiochus IV on the Seleucid throne in 163 BCE. Osgood also notes Roman state interest in commerce, facilitated by sea, rivers, and roads, but highlights the perennial danger to trade - piracy - which was encouraged by Rome's "parsimonious administration" (22) of the empire. In the following chapter, Osgood surveys life in the Urbs during the mid-second century, including sections on the Roman census, the layout of the city, the organization and functions of the various popular assemblies, and the constitutional framework of magistrates, senate, and people, or SPQR (senatus populusque Romanus, "the senate and people of Rome"). Also stressed in this chapter is the dominance of the senatorial class, which advertised its prominence in triumphs, funeral processions, shows, games, public banquets, monumental building - all of it financed by the profits of empire.

Most of the remaining chapters are chronologically sequenced, but overlap significantly in order to bring out larger themes and bracket important phases in Rome's internal and external development. Chapter 3 treats the struggle between populist reformers and the political establishment from Tiberius Gracchus to the eve of Marius' second consulship. Here, Osgood highlights the "political creativity" shown by revolutionary tribunes in trying to solve Rome's social problems amid a lamentable shift from politics to violence as the means of getting things done. Chapters 5, 7, 8, 11, 12, and 14 are largely narrative accounts, respectively, of the Social and Civil Wars of the 90s and 80s, the rise of Pompey the Great between 80 and 60, the domination of the "first triumvirate" in the 50s, the Civil Wars of the 40s and 30s, the principate of Augustus, and the transfer of power to Tiberius. In Chapter 6, Osgood uses the material remains of Pompeii as a lens through which to chart Rome's impact on Italy (and vice-versa), and the role of the Italians in the empire between 150 and 50. Chapter 9 surveys the nature of Roman rule overseas, while Chapter 10 is an examination of Rome's internal culture in the late Republic. In Chapter 13, Osgood examines Augustus' thoroughgoing refashioning of the fabric of the city and the cultural changes he inspired in the areas of literature, religion and morality, art, and urban living across the empire.

Osgood's book is a succinct and very accessible narrative of this crucial period of Roman history that also hits the thematic high points we have come to expect in such surveys. But his thesis is often in tension with the content of his narrative. While there is some merit in accentuating the positive, there is simply no shaking the broader impression that the Roman state, in Osgood's telling, lurched depressingly from blood-soaked crisis to blood-soaked crisis across the period. With few exceptions, moreover, the major figures of the late Republic are still the ruthless, greedy gangsters that pervade both modern scholarship and popular culture. Marcus Brutus, that morally principled future assassin of Julius Caesar, "was really a usurer" (146), shaking down helpless provincials for repayment of loans at 48% interest, resulting in his use of Roman legionary cavalry to lay siege to his Cypriot senatorial creditors, five of whom died of starvation during the ordeal. The heroes who create the world state, moreover, seldom belong to the Roman ruling class but more often to the provincial aristocracy, the tax-collecting publicani, Greek scholars and teachers, and slaves. This emphasis occasionally leads to paradoxical conclusions. So, "the publicani ... increase[d] their own profits -lending money at high interest to communities in default of their tax payments, for example" - precisely the sort of behavior that precipitated the crisis on Cyprus, mentioned earlier - but "they deserve credit for the growth of the Roman Empire and its transformation into a stable fiscal entity" (151). Osgood also argues that "slavery, as loathsome as it seems to us, actually solved many of the problems" facing pre-modern small business, and "helped generate the sophistication the city of Rome achieved" (164). "The horrors of Roman slavery should not be minimized" (164), indeed, but this is precisely what Osgood does by not discussing them more fully.

Nevertheless, Osgood succeeds in the unique task he set for himself of demonstrating that the "new age" of Augustan peace "would not really have been possible without earlier developments like the massive spread of Roman citizenship after the Social War, the creation of a more stable provincial administration, the rising cultural ambitions of the city of Rome, and a growing appreciation for leisure" (240).