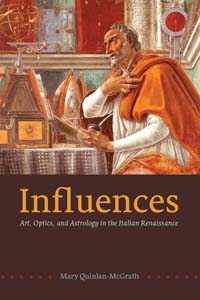 Mary Quinlan-McGrath's study draws together ideas from theology, natural philosophy, and optics, weaving them together to their relationship to the power of art in the early modern period. Quinlan-McGrath is successful in her astonishingly well-documented and engagingly-written study to remind readers of the very active role of art and architecture in the Renaissance. All too often, we find it difficult to place ourselves back into the mindset of historical periods, leading us to overlook the fact that works of art and architecture were seen to work in ways that we no longer perceive.

Very much a teaching book, this study undertakes the daunting task of elucidating complex and seemingly conflicting ideas drawn from ancient and early modern thinkers as relates to natural philosophy, theology, optics, astrology. The book is structured to build the author's argument by carefully and clearly laying a foundation of the philosophical and metaphysical texts necessary to support her thesis. She masterfully engages the reader in these complex examinations and punctuates these regularly with anecdotes and images.

Quinlan-McGrath begins in her Preface by asserting that in the early modern period, art literally worked, or better in the author's words, "were considered alive in ways that we miss" (x). It is important to note that the author's goal is not simply to provide an interpretation of works in light of natural philosophy or astrological treatises. Rather, she seeks to bring the reader more directly into the cultural context of specific types of works of art, architecture, and urban planning, to examine the ways the patrons and other intellectuals of the period perceived their world to function.

The first chapter provides the necessary philosophical and scientific explanations from a theoretical perspective, fundamentally laying the groundwork upon which her last four chapters will be built. Throughout these chapters, the author underscores how embedded in the intellectual culture of the Renaissance were such beliefs, as well as bringing forward the relationship between ancient philosophical ideals of the single creator and the unity of creation. She makes the convincing argument that the study of the heavens was considered an important and holy endeavor, as well as how vision played a significant role in early modern philosophy and theology.

The second and third chapters shift the discussion to a more direct and even physical relationship between the heavens and intellectuals who studied them. These chapters help the modern reader better understand the early modern reconciliation between theology and astronomy, as well as to comprehend the power the heavens were believed to have over the fortunes of those on earth. The author masterfully analyzes such sources as Albert the Great, Thomas Aquinas, and most prominently Marsilio Ficino to demonstrate the complexity as well as the pervasiveness of belief in the ruling power of the stars.

The author moves from the theoretical foundation of these ideas to their practical application in the following chapters, using case studies involving urban planning, architecture, and frescoed programs. Her arguments follow logically from the thorough theoretical foundation she has built. For example, it seems eminently reasonable that based on the elaborate study of the stars, patrons would insist on selecting the most optimal sky under which to lay the cornerstone of a significant structure. The author further asserts the holistic view of creation with the following statement: "The connectedness between the life of a person and the life of that person's city can be seen within the cosmological understanding that lay behind the astrology - the notion that all celestial bodies were energetically influencing the physical geography of one's city, just as they were influencing the physical matters of one's body" (86).

The case studies presented in chapter 6 provide persuasive evidence of the widely held belief among leaders and their intellectual circles in the active power of the stars. The author uses significant examples of foundation horoscopes for Francesco Sforza's ideal city of Sforzinda, the most significant religious structure in Christendom, St. Peter's Basilica, and the private villa of Agostino Chigi, the richest man of his day. These case studies demonstrate that among the most powerful patrons of the Renaissance, the configuration of the stars and the precise alignment of the earth to those stars was carefully considered to ensure future success. The case studies convince us not only of the need to found a city or lay a cornerstone at a particularly favorable sign, but also of the belief that the favorable configuration of stars would continue to have a very real and powerful impact on these structures and those who encountered them.

Upon the strength of these case studies, the author turns in her final two chapters to the question of painted imagery. According to Quinlan-McGrath, both patrons and intellectuals saw astrological imagery as having a powerful effect on the patron, his family and friends, and even his enemies. The cogent and well-supported argument for the intended function of such significant frescoed vaults, commissioned by some of the most powerful patrons of the Renaissance, adds significantly to our understanding of the very real power of imagery as it was felt in the early modern period. She states in her conclusion, "As light Rays carried the vaults' images, and their stored radiation, to the bodies, eyes, and minds of their viewers, they were calculated to serve their patrons and families salubriously and others apotropaically" (200). While in the past, scholars have focused on decoding the meaning of these astrological frescoes, Quinlan-McGrath very masterfully reminds us that in the Renaissance works of art truly lived as agents of and for their patrons.