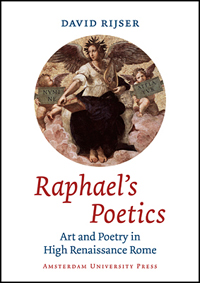 David Rijser's Raphael's Poetics: Art and Poetry in High Renaissance Rome provides an examination of the intellectual and cultural context of High Renaissance Rome as a means of re-considering the complexity and subtleties of some of Raphael's most well-known works. This book, which derives from the author's dissertation, seeks not so much to revisit the meanings of such commissions as Raphael's Stanza della Segnatura, the Goritz Chapel in Sant'Agostino, or the frescoes from the Villa Farnesina, as to reconstruct the intellectual environment and humanistic experience in which these paintings existed. While the author does offer nuanced interpretations of these works, his readings are suggestive and multivalent, rather than determinative.

Divided into an introduction and essentially five chapters, the author asserts the necessity of seeing creative activity of the dynamic intellectual community of the early 16th century in Rome holistically in order to understand the play between the visual and the literary artists that define this humanist circle. For this endeavor, the author's facility with the literary milieu of the 16th century is deepened by his knowledge of the ancient texts upon which these humanist endeavors were founded and with which they were competing. The author makes it his priority to assert the necessity of the original sources, providing the reader with expansive original language texts as well as their translations upon which his interpretations are based.

It is not enough, the author asserts, to link Renaissance images to appropriate poetic texts, whether ancient or contemporary. The scholar must push deeper to understand the context, the rhetorical structure, the 'codes' being employed by the authors of these poems and how the artists, patrons, or advisors may have drawn on those encoded texts.

The introduction of the book presents the essential role that ancient poetry will play throughout the study. The author makes clear that he is not interested in simply documenting relationships between texts and images, but rather he wants to put his reader into the world of the humanists, to be able to 'read' afresh such iconic works as the so-called School of Athens or Galatea. He states in his introduction: "I will argue that expert Renaissance readers and viewers took this cue, and that, moreover, we as interpreters of their culture should do the same, that is, consider what an image meant, that is, what the interaction of the viewer with the image consisted of. The reconstruction of such interaction must, of course, always remain conjectural, for the contact with works of art and the significance these engendered were to be performed by the viewer every time s/he was confronted with that work, and differently by different viewers, problems, that will concern us time and again" (xv-xvi). While this seems to suggest the possibility of endless and individual meanings/readings, the author uses the stability of the ancient and Renaissance literature to forward interpretive readings of these most familiar works of Raphael.

It is significant to note that this study is not a literary history, but rather takes a literary approach to understanding visual arts. One might suggest that this study is less about Raphael than it is about the cultural context in which he lived and in which his works were experienced. This approach provides an interesting model to examine the living experience of a work within its cultural and historical contexts.

The first chapter opens by orienting the reader to the author's approach. Here is made the significant point that viewers in the High Renaissance were at ease with visual rhetoric and were at home with the dissolution between the artistic world and their own. This study takes on a form of reception theory, in which the author focuses his attention on the life of the work within a specific audience of viewers. This allows the layering of potential nuanced readings without necessarily prioritize one or another as 'the' reading.

The next three chapters each take up a particular work or series of works undertaken by Raphael and others in Rome. The second chapter examines on the Stanza della Segnatura of the Vatican, the third focuses upon the Goritz Chapel in Sant'Agostino, which includes Raphael's fresco of the prophet Isaiah, and the fourth analyzes the program of the Villa Farnesina, which includes the famous Galatea. Each chapter opens with the question of the living experience of these works, not only discussing possible issues of conception, whether by Raphael, by theological advisors, or by the patrons, but also, and perhaps more significantly for this study, the layered and nuanced levels of meaning which are suggested by the contemporary poetics produced in response to these works.

Overall, a major contribution of this study is the fact that it underscores the significance of the poetic age of the early 16th century and in large part brings to light the interrelation between the visual and verbal arts of this period, a point significantly examined in the "Interlude" section between the third and final chapters of the study. Similarly the author is right to underscore how completely intertwined the ancient or pagan history of Rome was with the sacred or Christian history of the Church through his analysis of the artistic and literary production of this moment of conscious revival.

One point that must be stated, though not belabored, is that this study would have benefitted from careful editing. The depth of literary content is extraordinary and the suggestive interpretations are compelling, but the multiple editing and proofreading errors are lamentable. Similarly, it should be noted that though published in 2012, this book derives from the author's 2006 dissertation and as such does not incorporate recent scholarship on Raphael or the visual arts in High Renaissance Rome. The extensive bibliography has few entries published in the last decade, and the majority of these most recent sources relate to literary scholarship.

The author has presented the reader with a wealth of literary poetics that were essential to the humanistic culture of High Renaissance Rome. While readers will appreciate this contribution, it is possible to suggest that the current study does not incorporate adequately the rich and complex visual and artistic traditions that certainly played a significant role in the creation and experience of the examined works of art.

Overall, Raphael's Poetics presents an intriguing and suggestive investigative mode; that is, that works of art were likely to have been more dynamic in their interpretation by their intended audiences than traditional art historical scholarship has taken into consideration. The idea that the true relationship between art and life was permeable and complex is certainly a significant methodological contribution, one that may cause readers to take on similar reconstructive and suggestive approaches, even if they do not do so specifically through the lens of classical or Renaissance poetics.