Marcia B. Hall (ed.): The Cambridge Companion to Raphael 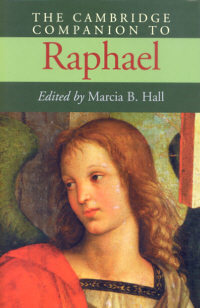 In the final installment of the Cambridge Companions to Art History series, Marcia B. Hall takes on the topic of the ever-popular Renaissance artist, Raphael. This volume provides a welcome and refreshing look into some of the most recent trends in scholarship in order to delve into such topics as the artist's relationships with patrons, the development of his workshop, and generally to place his work more directly within the intellectual and cultural environment of sixteenth-century Rome. Similar in scope and format to the other offerings in this series, this book contains thirteen essays which are divided into four sections: the artist before his arrival in Rome, his Roman sojourn, his successors, and finally, on his reception throughout history.

The collection of essays sets out not to provide a comprehensive view of the artist nor to be particularly revisionist in its scope, but rather to acknowledge the value of previous scholarship and to point toward new avenues of research on one of the most well-known artists of the Renaissance. This book is a welcome addition to Raphael scholarship, providing students and enthusiasts of the Italian Renaissance a manageable text that will, no doubt, spark new interest and new debate among its readers.

Marcia B. Hall opens the book with a concise review of the artist's life and career, acknowledging that though his career was quite short in comparison to his famous contemporaries, Michelangelo and Leonardo, his impact on successive generations of artists was amazingly long-lived. Hall concludes her introduction by noting that recent scholarship on the intellectual and cultural history of Rome, as well as a general shift in focus among art historians away from the issue of artistic style and attribution, has paved the way for the current volume.

Part I of the book, "Before Rome", consists of two essays, "Young Raphael and the Practice of Painting in Renaissance Italy", by Jeryldene M. Wood; and "Raphael and His Patrons: From the Court of Urbino to the Curia and Rome", by Sheryl E. Reiss. Both essays focus on the early career of the artist and his relationship to his patrons. Wood's essay focuses on placing Raphael's early career within its cultural context, "in terms of his personal agency, his fellow artists, and his patrons" (16). This essay brings to light the web of social ties that are inextricably bound up in the artist's early career and illuminates how it was necessary for a young artist such as Raphael to negotiate this web to place himself into the position to gain and retain patrons and commissions.

In Reiss's essay, the patrons come to the fore, as does the way the young artist positioned himself so effectively within the patronage system, to the extent that in his short career, he was one of the most sought-after artists in Rome. Among the interesting issues brought forward in this essay is the necessity for art historians to examine more closely the effect the patron might have had on a particular work of art, as well as the need to question whether and how much artists would have adjusted their style to accommodate the desires of the patron. The two essays in Part I also serve to remind students that scholarship involves debate and disagreement. In the case of these two authors, their different views on Raphael's early artistic development can be useful tools to further expand the discourse on this artist's career.

Part II of the book is dedicated to the artist in Rome. Of the four essays in this section, the first is dedicated to the city itself, the next two essays deal with two particular projects undertaken by Raphael during his Roman sojourn, and the final contribution examines the famous rivalry between Raphael and Michelangelo with new eyes.

Linda Pellecchia's essay, "The Contested City: Urban Form in Early Sixteenth-Century Rome", is a welcome contribution to the scholarship of the Renaissance art. Though it does not deal specifically with Raphael or his commissions, this article provides an illuminating image of the development of the urban fabric of Rome in the 16th century. Focusing on the city itself and the ambitions of its popes to bring it back to its former glory, the author allows her readers to peek into the world of Renaissance Rome. Not always a pretty picture, Pellecchia draws her reader into the self-aggrandizing efforts of Julius II. and Leo X. to transform Rome into an imperial city once more.

The next two essays examine specific commissions by the artist. Ingrid D. Rowland, in her essay, "The Vatican Stanze", provides an analysis of Raphael's frescoes in Julius II's private suite in the Vatican. Joanna Woods-Marsden then takes up Raphael's papal portraits of Julius II. and Leo X. to explore "how the individual with the highest rank and greatest powers in Christendom chose to figure the self visually during the period that we call the High Renaissance" (120).

In the final essay in Part II, Costanza Barbieri focuses her attention on Raphael's relationship with his contemporary artists, specifically Michelangelo and Sebastiano del Piombo. While the rivalry between Raphael and Michelangelo has been long discussed among art historians, Barbieri argues that an important player in the rivalry between the two has not been given his due. The author refines our knowledge of the rivalry between Michelangelo and Raphael - understood by many contemporaries as the paragone between disegno and colorito - by reviving Sebastiano's reputation not simply as a great colorist who executed Michelangelo's designs, but rather as an well-respected artist who competed, and by some accounts, bested the beloved Raphael. This essay, in particular, brings to light one negative aspect of this book, that is, the exclusive use of black and white illustrations. Color reproduction would have been useful to this author's arguments in particular.

Part III of the book is dedicated to an examination of Raphael and his successors. The essays include an analysis of the development of his workshop, his use of engravings, and the artist as draftsman. Bette Talvacchia takes up Raphael's workshop, approaching the topic from the point of view of Raphael as manager. As such, the author argues that Raphael brought together assistants in his workshop in a fundamentally different way than had been done before. This managerial style, the author argues, ultimately led to greater innovation and creativity in the working process. In Patricia Emison's essay, "Raphael's Multiples", the artist's relationship with Marcantonio Raimondi and its effect on both artists' careers and reputations are examined.

Linda Wolk-Simon's essay, "Raphael Drawings, Pro-Contra", provides a useful review of the literature on Raphael's drawings. This historiographic essay acutely points out the problem of the "swinging pendulum" in the scholarship on Raphael as a draftsman, in which the collection of autograph Raphael drawings has expanded and contracted radically following the prevailing trends in attribution at the time. The author concludes her essay by calling for a renewed analysis of Raphael's drawing to correct what she calls the "extreme 'attributionist' views" that can be seen in the previous literature (219).

The final section of the book, entitled "The Assessment of History", deals with the critical fortune of Raphael from his lifetime to today. Hall's essay brings forward an interesting issue in the recent trends of art history. With a greater focus on replacing particular works of art into their original context, be it intellectual, cultural, political, religious, or artistic, scholars have begun to turn their attention away from the connections between works of art. Hall argues, however, that there is a need for an understanding of what works from the Renaissance and works created by Raphael in particular, have in common. In this historiographic essay, Hall takes up the stylistic definitions of classicism and mannerism, as they have been applied to Raphael's oeuvre in the art historical scholarship of the 16th century.

The following two essays by Carl Goldstein and Giovanna Perini examine Raphael's critical reception in France and in Western Europe respectively. Each notes the importance of Raphael as a model of instruction for the burgeoning academies of art in the seventeenth and eighteenth centuries. Further the two essays also examine moments in which the artist's critical acclaim was challenged by the national schools that had once held him in the highest esteem.

The final essay in the collection, "Restoring Raphael", continues the examination of Raphael's critical reception after his death through modern times, but from a unique point of view. Cathleen Sara Hoeniger examines not the writings of artists and art critics, but rather explores the history of the restoration efforts on several of Raphael's paintings. In this intriguing essay on the changing practices of restoration, the author argues that Raphael's stature as one of the greatest artists of the Renaissance had an impact on which restorers took up the work and what practices they used when approaching one of his masterpieces. This final essay is perhaps the most original in that it brings to light a little studied aspect of the history of art, the restoration process.

The Cambridge Companion to Raphael is a useful collection of essays for students and enthusiasts of this Renaissance artist, and more broadly, of the Italian Renaissance. The book provides a summary of many of the major trends in recent art historical scholarship on the artist. In addition, several contributions are particularly enlightening by bringing forward new areas of research. One negative aspect of the book is the quality of its reproductions. Though illustrated with the major works of Raphael, the plates, collected at the beginning of the text, are reproduced only in black and white. The single color image included is the Angel fragment from the Nicola of Tolentino altarpiece, which adorns the book jacket. Unfortunately, it has been printed in reverse. All in all, the book accomplishes its mission and will certainly spur further debate and inquiry into the case of Raphael.