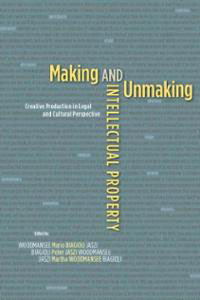 Making and Unmaking Intellectual Property: Creative Production in Legal and Cultural Perspective offers compelling insights that challenge central ideas and primary narratives about intellectual property (IP); it also presents new perspectives and methodologies for some well-known areas of IP that dominate scholarly and popular literature and consistently confronts simplified dichotomous IP positions, such as the individual versus the collective, private versus public domains, tangible versus intangible properties, and legality versus illegality, revealing more complex dynamics at work.

This ambitious collection of essays is intended to be both highly specific and relevant to a wide range of readers in a variety of disciplines. It "seeks to identify and interrogate a constellation of IP discourses and objects from the work of legal scholars, anthropologists, indigenous rights advocates, literary scholars, art historians, science studies and communication studies practitioners, musicologists, historians, folklorists, and economists", showing particular interest in "mismatches" between legal definitions of IP and "discourses and objects", as well as scenarios generated by "arrangements that emerge at the margins of IP law" (10).

The editors distinguish the writers' essays within IP literature as based "in the specifics of material as well as legal practice" (11). Twenty-three essays are organized thematically in five sections: "High and Low: IP Practices and Materialities", "Before and After the Commons and Traditional Knowledge", "IP Crimes and Other Fictions", "Old Things into New IP Objects", and "Doing and Undoing Collaborative IP". The editors' inclusive scenarios problematize IP by introducing many different, unique, and specific kinds - and varied perspectives on them - which sets up a cumulative effect of the essays' arguments to demonstrate and question how the foundational problems of IP are engaged in the world and how they play out.

In the book's introduction, the editors observe IP's rapid movement from relative obscurity to a prominent position in practice, study, and popular culture. They highlight the persistence of the concept of the singular figure of the author, which, despite its relative newness and vigorous critiques of it, remains a foundational concept in IP. With the attendant allegorical qualities assumed in figuration, various distinct incarnations of figures recur throughout the essays. Most notable are the professional author and inventor, the amateur author, the pirate and trespasser, the informant and enforcer, the generalized "person skilled in the art" (of patent invention) and unnamed professional patent writers. More abstractly, "nature" is presented as a collaborator and "community" as a constructed body; these ideas can be associated with the book's emphasis on collaboration and the transformation of existing works, which are particularly successful in deconstructing IP.

It also notes that "innovation" is curiously immune to the kind of ideological critique that weighs upon historically related ideas, such as the concept of progress, arguing that innovation is framed as open-ended and cannot be tied to a single specific economy, practice, material, or conventional political ideology, producing the odd result of distracting from addressing core IP issues. Instead, proponents of this concept of innovation are described as focusing on inequities within the IP system and institutions, not on fundamental aspects of IP itself (6-7). With some exceptions, this point is a prevailing idea throughout the essays, and Lawrence Liang's "Beyond Representation: The Figure of the Pirate" directly questions the value of "creativity and innovation" (175).

While it does not offer obvious ways to resolve the array of contradictions and unusual circumstances it presents, the book effectively destabilizes many familiar ideas about IP. It also provides "material for both understanding and producing culture", and it could inspire "saner" IP laws in the future (10): the conclusion of Adrian John's "The Property Police" urges analysis of the operations of IP enforcement industries to inform IP laws (212).

The contributors tip the objects of their studies to shed light on unexpected historic and contemporary forms and the practices that shape their structure, exposing weaknesses of perception, doctrine, and orthodoxy and revealing strong connections to social structures and materials, links to political expressions, marketing and reputations, moral and ethical concerns, subversions and inventive responses to opportunities, and reinscriptions that convey differences in economic infrastructures and reveal elasticity in the creative origin of specific works. A pivotal and helpful demarcation throughout the book is the shift in patents from privileges to rights in France and the US around 1790, with its attendant implications.

The book conjures up an intellectual and visceral sense of wonder that is absent in conventional analyses of IP. It does so by succeeding in its aim "to make IP 'strange'", which it accomplishes through a methodology of intentionally intimate analysis of seemingly divergent subjects, such as the structure of IP norms in stand-up comedy, the specific roles of owner, custodian, and caretaker in a range of cultures, and IP concerns in biological reproduction of many kinds, as well as by identifying and analyzing "slippages between practice and its legal conceptualization" (11). These strategies and others reveal that aspects of IP are built upon paradoxes, fictions, unique cultural practices, and unchallenged assumptions and values in particular times and places.

The making and unmaking of IP is usefully characterized by Pamela Samuelson in "The Strange Odyssey of Software Interfaces as Intellectual Property" by revealing the shifting validity of IP law's application to its object in the peculiar case of software interfaces that facilitate interoperability, instructively demonstrating how at various times and in different ways a variety of approaches to IP have seemed appropriate for user software interfaces. These include no IP protection, protection by patent, trade secret, sui generis law, and copyright. The essay obliquely imbues "Interoperability" with aspirational metaphoric potential in the context of a work presenting interrelated yet distinct aspects of IP.

This book presents exceptional research, perceptive conclusions, and new knowledge that could help influence the future production of culture and formation of IP law. While it provides an inclusive treatment of IP by extensively covering both patents and copyrights, which are often treated discretely, and introducing esoteric analogous systems beyond them, such as peer enforcement and public livestock registries to protect bloodlines, a further broadening of IP conventions - for instance, by offering equally close readings of trademarks, trade secrets, trade dress, and design patents, among other IP rights that are frequently separate and marginalized in the literature - would have been welcome and potentially even more enlightening and consistent with its multivalent approach, if possibly at odds with the editors' intention to make IP "strange".

In addition to the inclusion of citation and subject indices to create continuity across complex texts, a number of the writers place ideas in their essays in relation to others' ideas in other essays in the book. A "contributors" section with short biographies of the writers usefully contextualizes the essays within the writers' areas of study and / or practice. As previously mentioned, the contributors come from a wide range of disciplines and roles, which is an important underpinning of the book; their degrees and studies also include engineering and applied sciences, physics, biochemistry, the sociology of law and economics, and the history of architecture.

Forty small-scale black-and-white illustrations and a handful of diagrammatic tables advance the book's narratives and partly convey its content. They include patent drawings from a range of periods, a "Graphic depiction of 'expressions of folklore' as a subset of traditional knowledge", an illustration of "Hierarchical clustering of patents" that could form a "technological platform", graphics from antipiracy campaigns for classrooms, variations of sixteenth- and seventeenth-century prints from Italy, "Musicians' business models", and "Gene-related patents and patent applications mentioning race or ethnicity, 1976-2007". In light of the excellent scholarship, it is unfortunate that the micro font sizes present a challenge even for readers with exceptional vision.