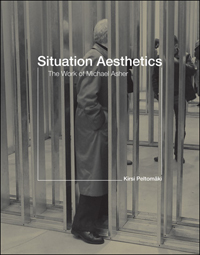 From the start of Situation Aesthetics: The Work of Michael Asher, which spans four decades and enriches the literature on the subject, Kirsi Peltomäki positions Asher's work as intending to facilitate human interaction and emphasize specific experience. Asher himself and other writers have already carefully chronicled the social dimension of his work: its experiential formation, its engagement of participants, its frequently temporary forms, and its situational conception and structure. However, Kirsi Peltomäki's careful illumination of its sociopsychological dimensions and her emphasis on the work's affective or emotional currency in viewing relationships enlarges understanding of it and augments its critical reception by focusing on its capacity to "direct attention to human subjects" and elicit from them evidence of experience that reflects what the author views as the "centrality of the sociopsychological strategies within Asher's work" (9). She also places Asher's work into concise art-historical contexts that necessarily shift over his career, with a strong distinction between his work and that of artists associated with the light and space movement, since Asher's work "did not separate intellect from experience" (34).

The introduction reinforces the author's approach by presenting a "Foucaldian experiential matrix" (13f.) that advocates undertaking a historical study of a subject from the vantage point of experience. This model is joined with Jacques Rancière's conception of "'the given distribution of the sensible,' which determines the type of information that is visible, thinkable, or perceivable within a particular context" (13) to form part of the theoretical framework that the author uses to examine how Asher's work operates in the social realm.

Each of the book's four chapters covers a specific category - "Viewing Experiences", "Contracted Participation", "In the Name of the Artist" and "Institutional Support" - that are "thematically organized around the subject positions that dominate Asher's work: viewer, participant, artist, and institutional representative" (16).

Kirsi Peltomäki offers Asher's definition of "situational aesthetics" as "an aesthetic system that juxtaposes predetermined elements occurring within the institutional framework, that are recognizable and identifiable to the public because they are drawn from the institutional context itself" (12), which was published in 1983 in relation to his contribution to the 73rd American Exhibition at the Art Institute of Chicago in 1979 - a work that closely embodies this definition (183): the deinstallation of a twentieth-century bronze replica of an eighteenth-century marble statue of George Washington by the French artist Jean-Antoine Houdon from its prominent site on a stone plinth at an exterior entrance of the museum and its reinstallation, sans plinth, in a central position within an interior gallery that featured European paintings and decorative arts from the period of the original statue. While Kirsi Peltomäki stresses that Asher has consistently declined invitations to reconstruct past works (6), she does discuss his "recreation" of this work in 2005 (53ff.), under new conditions: the Houdon statue had been kept in the mayor's office since 1984, and the eighteenth-century gallery had been reconfigured and reinstalled. Asher adapted the work from 1979, in which Kirsi Peltomäki identified the statue as "coded as a readymade" (53), to the new circumstance by relocating it to the museum, placing it as close as possible to the site of the original work in the gallery and introducing a museological display within the museum's library that emphasized its history. This work underscores Asher's point that reconstructing a work would necessarily change it, because the original situation and context could not be recreated (6f., 167). [1]

In both defining "situational aesthetics" and locating Asher's work in an art-historical context, the author connects the term to Victor Burgin's use of it in Studio International in 1969. Kirsi Peltomäki documents that Asher was "most likely familiar with Burgin's 'situational aesthetics'" because he read the publication during the late 1960s (185). [2] Along this line, the author helpfully navigates potentially related art theories by, for instance, offering a delineation between situational aesthetics and relational aesthetics, citing Asher's use of contracted individuals instead of conventional viewers as a significant distinction (198f.). A potential relationship between situational aesthetics and the Situationist International - some of whose members have produced work that might be viewed as sharing common ground with Asher's through its situation structure, concerns with labor and production, and focus on subjective reception - is not treated, leaving the relationship open to speculation.

Kirsi Peltomäki also discusses one of Asher's few permanent works, an outdoor drinking fountain (1991) in the Stuart Collection of the University of California, San Diego [2], which serves as an interesting counterpoint to his mostly temporary works; she describes its symbolic position on the campus, contrasts it with conventional decorative fountains, and compares it to traditional outdoor public sculpture through its use of materials - stainless steel and two types of granite. She also places it in relation to Marcel Duchamp's Fountain (1917), a detached urinal construct that is understood as a "readymade", which is broadly defined as an artist-selected mass-produced object that is redefined as art when deliberately placed into an art context. Kirsi Peltomäki makes a twofold distinction between Asher's fountain and Duchamp's Fountain: first, while the form of Asher's fountain is based on a recognizable mass-produced design, it is a custom-made object, and second, unlike Duchamp's Fountain, Asher's work retains its conventional utilitarian function as an operating drinking fountain. The author's traditional conception of the readymade is a thread throughout the book and is important in understanding the contemporaneous meaning of Asher's historic practice in relation to it. Nevertheless, his work's critical reception would benefit from being scrutinized through the lens of more recent scholarship on the topic of the readymade, led by Rhonda Roland Shearer, which asserts that all of Duchamp's "original" readymades, including Fountain, were in fact custom-made objects ultimately intended by Duchamp to call into question the mechanisms of the creative process and human perception [3], making this reading of special interest to this study. In keeping with her focus on the social reception of the work, Kirsi Peltomäki highlights the television news coverage of the opening of Asher's fountain as "aimed at a specified viewer whose agreement with the news anchor was assumed" (61), which she contrasts with the individuated reception of the work by assorted viewers, including students who have developed folklore about the intellect-enhancing properties of the fountain's water.

Situation Aesthetics presents a nearly comprehensive study of Michael Asher's work with a special emphasis on its social formations and reception. It avoids conventional biographism by offering few facts of the artist's life and placing its attention on new information about his work process and proposals, which has the effect of offering an intimate view into his thoughts. Forty-eight black-and-white images of works by Asher accompany the text.

[1] Asher's ongoing reconstruction of a work for the decennial exhibition Sculpture Projects in Münster, Germany, which highlights contextual changes, is not included in this study. See "Michael Asher 1977", Skulptur Projekte in Münster, http://www.lwl.org/skulptur-projekte-download/muenster/77/asher/index.htm.