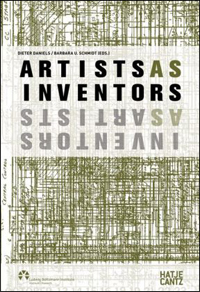 The title of Artists as Inventors - Inventors as Artists reveals a conception of what the editors Dieter Daniels and Barbara U. Schmidt refer to as a "bidirectional relationship" (16) between the roles of artists and inventors that allows for a nonlinear, multivalent examination of the complex interrelationships of art and science, with technology identified as their meeting point and culture as their context. [1] The editors assert an ambitious and idealistic call for genuinely interdisciplinary study and practice and highlight "visual thinking" as an important concept (17). To make their case and explore these ideas, the authors present salient efforts that engage Western technology and artistic media from the nineteenth century to the present through case studies, in the form of eight scholarly essays and five interviews with practitioners. The book helps to fill a gap in the literature concerning correlations between artists and inventors and the ideas, technology, and socioeconomic circumstances that connect them. The influence of military and political circumstance on technology and artistic expression is of note in the case studies.

Partially obscured within a scholarly discussion of the work of Leonardo da Vinci and Galileo Galilei is a central idea of what the editors describe as "visual thinking" and elaborate on as "the question of visualization and visuality of aesthetic, technical and scientific thinking that has only recently entered into the consciousness of the general public." (16) It is left to the reader to tie together specific elements within the case studies to form a clear picture of visual thinking, which is intended to be distinct from linguistic thinking and akin to manual thinking. Paul DeMarinis, an electronic media artist, demonstrates the value of the case study interviews. In Dieter Daniels's "Working in a Place before Words, Interview with Paul DeMarinis, 2007," DeMarinis describes Thomas Alvin Edison's work as creative and Nikola Tesla's work as imaginative; he calls creativity "a recombination of the known" and associates imagination with the "ability to form a complete mental image of something," (80) closely tracking the phenomenon as described in Nikola Tesla's autobiography.

The title Artists as Inventors - Inventors as Artists not only refers to what the editors call the "reciprocal interaction of artistic practices and technological developments," (7) but also announces the precise roles of artists and inventors in the world. This emphasis on their identities is heightened by a discussion of Charles Percy Snow's The Two Cultures (1959), which is understood as articulating a distinct separation between the cultures of artists and scientists - a stark, facile argument that continues to resonate, permeating some of the book's case studies. The editors' emphasis on professional and social identities is more apt when considered in the context of Stephen Collini's introduction to The Two Cultures (1998), which traces to the 1830s the coinage of the term "scientist," referring to those practicing the natural sciences, in an analogy to the existing term "artist," locking the two identities together linguistically. [2]

Enlarging the discussion of identity, Karin Harrasser's "Switched-On Vulnerability: Designability, Gender, and Technology with Laurie Anderson and Wendy Carlos" melds the roles of artist and inventor into "artist / inventor" and scrutinizes this identity through overlapping themes of modification and gender ambiguity in practice and form.

Artists as Inventors' highlighting of identities is subtly reinforced by an index limited to names of persons referred to in the text. This restraint creates a slight obstacle in easily cross-referencing shared ideas in the rich variety of case studies, but serves to emphasize the editors' assertion that each one is intended to stand on its own. Artists as Inventors is framed by Norbert Wiener's book Invention: The Care and Feeding of Ideas, written in 1954; the editors refer to the following quote from Wiener in their text as a potential motto for their own book: "Thus one of the purposes of the present book is to make a proper assessment of the individual element in invention and discovery and of the cultural element." (9) It is fitting that Wiener's work - which discusses the materials and techniques of invention and attempts to break down the conditions necessary for it, drawing some examples from art history - would be an aspirational text for the editors. It is of interest that Artists as Inventors is a publication of the Ludwig Boltzmann Institute Media.Art.Research., whose agenda includes "working out new standards for the categorization, description and analysis of digital and media art within the broad context of art history and thereby making possible a new approach to media analysis." [3]

Out of this cultural context, Dieter Daniels's "Artists as Inventors and Invention as Art: A Paradigm Shift from 1840 to 1900" posits a significant relational change in the culturally perceived roles of artists and inventors, contending that the latter supplanted the former as geniuses or heroes in the popular imagination over the last two-thirds of the nineteenth century and, furthermore, that inventors appropriated elements of artists' identities to promote their inventions and animate and mythologize their personas, including strategically linking their names to their inventions. Dieter Daniels focuses on two artists-turned-inventors and two inventors-turned-"pseudo artists." (40) The artist Samuel F. B. Morse developed the first registering telegraph, and the artist Louis-Jacques-Mandé Daguerre invented a precise form of photography, the daguerreotype. Dieter Daniels establishes that these two inventions form the basic technology for all subsequent media (19), and that Morse and Daguerre's inventions overshadowed their art practices and altered their creative futures: "Only by eliminating the last remnants of the artistic in media technology did Morse and Daguerre achieve the worldwide fame as inventors that had been unattainable to them as artists. Their artistic means and goals were transformed into processes of media technology. On two counts, the thesis can thus be formulated: media are the continuation of art by other means" (36, 37). Edison and Tesla are presented as transformed by their inventions, ingenuity, and publicity to come to embody artist-like personas and mythologies.

The reciprocal relationship between artists and inventors is further examined in an attempt to establish criteria for their professional identities. The editors point out that while "inventor" is not a clearly delineated profession, credentials such as patents can provide evidence of the distinction, yet they concede that there is no equivalent for "artist." (12, 13) Neglecting to mention that artists hold copyrights is surprising considering that the topic arises in one case study in relationship to an inventor's ambition (29) and in another in the context of "online and corporate media" (64); this inadvertently reveals that the editors have not thoroughly questioned assumptions about artists' social roles or professional identities. Nevertheless, this omission creates a space for the contributors to put forth some compelling examples of how the evolution of certain inventions caused categorical flux and how specific inventions might be reassessed as belonging to the artistic realm despite their creators' intentions.

This book is a persuasive study of the relationship of artists and inventors through technology. The thematic emphasis on identity is balanced by the inclusion of original scholarship and illuminating descriptions of approaches, conceptions, and work processes. Thoughtfully selected black-and-white illustrations enrich the text.