Julia Eva Wannenmacher (ed.): Joachim of Fiore and the Influence of Inspiration 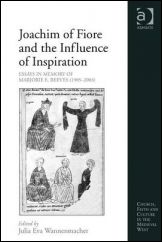 Joachim of Fiore has generated an industry of scholarship for many decades. A key figure in promoting Joachite studies has been Marjorie Reeves, whose life and career spanned almost the entire twentieth century. It is thus only fitting that a volume should be produced in her honour. Perhaps the most moving contribution is a eulogy by another great veteran of the field, Bernard McGinn. As a woman, starting to devote herself to studying Joachim in 1928, Reeves was an outsider to what was then a very male establishment. In many ways, Joachim's thought has often appealed to outsiders, fascinated by the notion that the Holy Spirit could inspire not just a prophet, but a new phase in history.

This perception of Joachim as an outsider to the ecclesiastical establishment has itself generated the major issue of much recent scholarship, namely whether he really was as radically detached from the orthodox perspectives as many of his disciples in the thirteenth century imagined, or whether he actually belonged more to a reformist mainstream. Perhaps the dominant perspective promoted in this volume is the latter, that he was a figure highly appreciated by several popes for his commitment to the cause of reform, and that his apocalypticism is not quite as revolutionary as Norman Cohn imagined, in his influential The Pursuit of the Millennium, first published in 1957. This volume does not include all the major researchers in Joachite studies. Thus it does not include essays by Robert Lerner or Gian-Luca Podestà (author of so many important books and editions of Joachim's works), or others of the Italian school of Joachite studies. The focus is methodologically classical, with the first group of papers focusing on his life and work, and a second part exploring his influence in the later medieval period.

In the main, North American scholars in the volume focus on his ideas and political thought, while European trained scholars have a stronger interest in the history of specific texts and their manuscript diffusion. Both perspectives are valuable, however, and have much to offer.

A number of papers in the first part of the volume focus on unlocking the originality of Joachim's sense of history, rooted in appreciation of apocalyptic themes in Scripture. Joachim's thought can seem bizarre because of his love of unusual visual images to communicate what he identified as the underlying patterns recorded in Scripture and played out in subsequent history. Thus the opening paper by E. Randolph Daniel focuses on what he called Joachim's 'unnoticed pattern of history', namely his second Diffinitio or the parallel between the flow of generations in the Old Testament to the flow of generations since the time of Christ. Questioning what he sees as an excessive focus on the first Diffinitio, namely the doctrine of three phases to history, of the Father, Son and Holy Spirit, Daniel emphasises that this doctrine only makes sense in relation to this less overtly revolutionary doctrine of concord between Old and New Testaments. Where Joachim departs from tradition, however, is that he continues to see the work of the Holy Spirit, which emanates from both Father and Son or the Old and New Testaments, as continuously at work in history.

This paper is nicely complemented by Bernard McGinn's paper on Joachim and the twelfth-century papacy, which argues that Joachim was far from being a radical outsider in his political connections, which counted many popes. From this angle, the fact that Joachim was criticised at the IV Lateran Council for questioning the authority of Peter Lombard is rather an accident that might mislead us into thinking that he was an outsider.

A paper by Christopher Rowland offers a theological reflection of Joachim's understanding of how apocalyptic themes operate in the New Testament. His genius was to grasp the continuing relevance of the challenge presented by Scripture to the historical process, as about the manifestation of God's kingdom and its demands.

Matthias Rield unpicks the implications of this insight for understanding not just history, but the political process. The Church, for Joachim, is always in the process of being reformed. This is also the theme of a poetic Visio, that John Fleming argues - with good reason - to be a work of Joachim. In presenting the vision of Paradise articulated by a pilgrim, Fleming shows why the Joachite vision was so exciting to his Franciscan disciples.

The second part of the volume contains papers that focus more on literary and textual issues. Fabio Troncarelli offers an elegant reflection on the theme of the Tiburtine Sybil in medieval thought, with particular attention to images of the Sybil in the Pamplona Bible, made in 1297 for Sancho VII el Fuerte, king of Navarre (1194-1234) and a major opponent of Alfonso VIII of Castile. He argues that they reflect the influence of Rainier Ponza, papal legate of Innocent III and a close friend and disciple of Joachim. The phrase celebrated in the Dies Irae of the shared witness of David and the Sibyl is not specifically Joachite, but it expresses a longstanding view that the gift of prophecy was not unique to the Hebrews.

A paper by Julia Eva Wannenmarcher explores a collection of excerpts from the Psalterium decem chordarum, with a detailed description of manuscripts and edition of the text. Christopher Egger is similarly precise and focused on a specific text, in his case the account of Joachim by Ralph of Coggeshall. An intriguing feature is the claim of an addition made here of Innocent III being a pope 'without successor'. Egger's discussion highlights the disputed character of Joachim's prophecies, even before his death.

Three final chapters deal with Joachim's influence in the early modern period. Kathryn Kerby-Fulton demonstrates the continuing fascination with Joachim's thought well into the sixteenth century. Sabine Schmolinsky considers his presence in the Lectiones mirabiles of a protestant humanist, Johannes Wolff (1537-1600). In a profound way, Joachim's writing offers a voice of continuity between the twelfth and sixteenth century in a common interest in the working of the Holy Spirit through history. A closing paper by Anke Holdenried examines how a thirteenth-century Joachite text, the Sibilla Erithea Babilonica would be reinterpreted by Daniel Clasen in his De oraculis gentilium, published in 1673. The connection made between Joachim and the Sibyl of ancient Rome may have been fictitious but it reflects a continuing fascination with the power of prophecy to legitimate the course of history.

This volume, necessarily specialised in some of its offerings, offers a worthy memorial to the achievement of Marjorie Reeves. Its focus on the thought of Joachim and on the influence of texts that he may have inspired demonstrates that his writings still generate attention for their interest in the flow of history and their critique of an established order, always in need of reform.