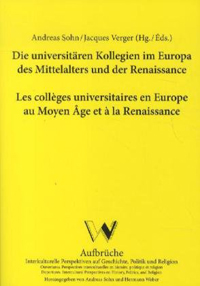 Until recently, university colleges in the medieval and early modern periods have tended to attract much less attention from historians than universities, above all that of Paris. In general, the few histories of individual colleges that have been produced are those of individual colleges that still function as significant teaching institutions, as at Oxford and Cambridge. This volume, part of a series on intercultural perspectives on History, Politics and Religion, edited by Andreas Sohn and Hermann Weber, brings together a range of essays on university colleges in various parts of Europe - above all in France (with particular attention to Paris), Spain, Rome, southern Germany, Vienne, Cracow. The complete absence of any discussion of colleges in the British Isles, so important from the second half of the thirteenth century, is unfortunate, particularly given that chronologically many of them were founded before many of those discussed in this volume. While the quality of individual essays in this volume is high, they tend to focus on institutional questions, leaving open the larger question of how attention to university colleges might cause us to modify our images of universities as a whole in the medieval and renaissance periods. In the modern world, educational institutions (particularly on the continent) tend to perceive themselves as essentially homogeneous, centralized structures that operate outside a collegiate structure. The essays in this volume remind us that universities in the pre-modern period were much more devolved in structure. Even though many students may not have been connected to a college (unlike the practice in contemporary collegiate universities, like Oxford and Cambridge), medieval colleges could confer unusual privileges on their members, shaping their subsequent careers and creating networks of patronage and support of great influence in shaping the political elite of medieval and early modern Europe.

There are some useful studies in this volume of individual collegiate foundations, but often with so much focus on their internal structure and role that not enough attention is given to their wider interaction with universities or studia as a whole. Jacques Verger offers an initial overview in a study "Fonder un collège au XIIIe siècle", that focuses on the situation in Paris, with only the briefest allusion to the foundation of colleges in England in this period. While he mentions the view that such foundations have been related to the colleges maintained by monastic and mendicant communities in Paris, he argues that they are different in nature because their students were not permanent members of a religious order although one could argue that those attending such mendicant or monastic foundations were in Paris for a limited period of time, like any secular cleric. To bring out the originality of collegiate foundations, more attention needs to be given comparing different kinds of college. Thierry Kouamé discusses the need to continue a project initiated by Astrik Gabriel in 1973 to publish the foundation acts and statutes of the Parisian colleges to the 16th century, in turn continuing a project planned, but never completed by Denifle and Ehrle in the late 19th century. The value of such a project would be heightened if it were to expand its focus outside Paris, often over privileged as a focus of scholarly enquiry. Perhaps less well known are the foundations of Parisian colleges by Scandinavian ecclesiastics, again to serve as an avenue for the education of young clerics and thus helping to build up an administrative class in their home regions. This Parisian emphasis is continued by a study of Aurélie Perraut on the chapels of Parisian colleges, architecturally significant constructions that have not often survived into the modern period. The significant library of the Sorbonne is accorded attention by Claire Angotti, raising a question in the reader's mind, how it compared to other major libraries, like that of St Victor. A paper by Marie Bouhaïk-Gironès on the performance of theatre in colleges, known through records of the 16th century, sheds unexpected light on the way colleges helped generate cultural activity beyond the purely academic.

A group of papers on colleges in southern France (Patrice Fossac on patronal rights in Cahors and Toulouse), Italy (Anna Esposito and Carlo Frova on Roman colleges in the 15th century) and Spain (Adeline Rucquoi on Iberian Colleges in the 14th and 15th centuries) broadens attention away from Paris. With each of these studies, the focus tends to be institutional rather than intellectual or cultural in the broader sense. A group of papers on colleges in southern Germany (Helmut Flachenecker), Austria (Karl Ubl on the Ducal college at Vienna, founded in 1384) and Poland (Krzysztof Baczkowski on the colleges at Cracow) offer a sense of how these colleges promoted elites within the later middle ages, perhaps serving social advancement more than intellectual originality. Gerhard Fouquet and Beatrix Karl both offer concluding papers on colleges with an eye to contemporary debates about graduate training. Given that the volume appears in a joint Franco-German publication series it is perhaps not surprising that the colleges in the British Isles should not be considered in this volume. It is to be hoped that further research will move beyond a narrow focus on local institutional history, to consider broader questions of how medieval colleges, originally intended to offer genuine educational and intellectual opportunity for those without means, came to help perpetuate a privileged elite, serving the interests of those in power.