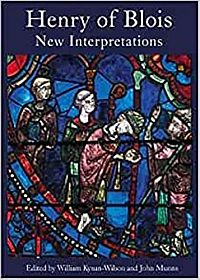 Henry of Blois, brother of King Stephen and bishop of Winchester, is one of those figures who regularly appear in any study of twelfth-century England, without necessarily getting the full attention that they deserve. In 1932, Lena Voss published a study (reprinted in 1965), Heinrich von Blois, Bischof von Winchester, 1129-71 that the editors of this volume (William Kynan-Wilson and John Munns) perceptively acknowledge as providing a foundation for subsequent scholarship on this remarkable figure. They observe that she provides a bridge between the more sympathetic accounts of Henry offered by nineteenth-century scholarship with the more cautious (and sometimes caustic) perspectives offered by twentieth-century historians.

The fascination of Henry of Blois lies in the way that he intersects several different spheres of endeavour, each with its own historiographical traditions. Was Henry driven simply by self-interest and ambition, or by pragmatic concern for the stability of the realm? In religious patronage, does he embody greed and desire for self-aggrandisement, in the way Bernard of Clairvaux described him? Within the realm of art and culture, was he genuinely a great patron, fascinated by classical tradition, whether in sculpture or in Latin prose? The interest of this volume is that it brings together a wide range of disciplinary perspectives to promote a less moralistic angle on a personality who in many ways embodies the conflicting tensions, religious, political, and cultural, of the twelfth century.

The opening essay offers not just an overview of historiographical tendencies since the monograph of Voss, but a helpful summary of three areas where more work still needs to be done: prosopographical research into his networks and household, more study of his travels, and the sources of his wealth. This does not make any of the subsequent chapters less valuable, as many touch on these issues. What does emerge, however, is that Henry of Blois is not a figure who can be easily classified, if only because of his longevity within a troubled period of English history. This is true in all three spheres to which he contributes, namely that of religion, politics and culture.

The decision of the editors to open with a paper by M. J. Franklin on Henry of Blois and Cluny is helpful because it corrects the dangerous tendency for historians of twelfth-century England to discount its profound involvement with the continent throughout the twelfth century. Henry became a monk of Cluny before he became abbot of Glastonbury in 1126. The value of Franklin's study is to emphasize the continuity of his associations with Cluny, which he likely visited in 1134 and again in 1143/44 on his way to Rome, with further visits in 1148/49. He may well have gone on pilgrimage to Compostella in 1150 as an emissary of Cluny where he went again in 1155 and 1160/61. We learn of Henry's massive (and burdensome) financial support for Cluny, whose economic problems in the twelfth century are well-known. Henry's continuing identification with Cluny provides a helpful template for this European perspective to his career.

There is a similar awareness in a study by Barbara Bombi of his time as papal legate in England between 1139 and 1143. Rather than viewing Henry as a self-seeking churchman, she argues (against David Crouch) that within his own terms he was committed to promoting ecclesiastic reforms and implementing canon law.

The chapter by John Munns, on the episcopal colleagues of Henry of Blois, moves in a similar direction of seeking to move beyond swift dismissal of his political ambitions. It is certainly true that Henry helped many of his nephews become bishops. He argues that it is inadequate to describe him as driven simply by nepotism. Henry was a grand seigneur in a traditional sense, but this was not behaviour that was new within the English Church. The value of the study by Munns is that it shows how a prosopographical approach can transcend the limitations of a purely biographical focus. It is noticeable that there is no essay in this collection on Henry of Blois and his brother, Stephen, or on Henry of Blois and the Empress Matilda. Perhaps this omission reflects a conscious move to shift historical attention away from narrowly royal concerns. Henry often surfaces as "the great survivor" as well as someone whose shifting loyalties affected the course of politics in mid twelfth-century England.

There are also some excellent chapters in this volume on Henry's contribution to cultural innovation within the twelfth century. Thus John Crook provides a fascinating, well-illustrated analysis of Henry's architectural legacy at Winchester, whose cathedral he started to rebuild sometime after becoming its bishop in 1129. He was interested in promoting the cult of Winchester saints, most notably of St Swithun, in a way that reflected his own, ultimately vain attempt to gain archdiocesan status for his church. Crook shows how Henry was doing what some of his episcopal colleagues were doing, but outstripping them with financial resources that they could not match.

Martin Biddle nicely matches Crook's essay by focusing on Henry's personal palace at Wolvesey, located in a part of the cathedral enclosure that goes back to at least the tenth century. Recent archaeological discoveries have greatly expanded our knowledge of the palace that Henry constructed for himself, rivalling the royal palace on the other side of the cathedral. Henry was building on a project of William Giffard, the previous bishop. While the focus of both Crook and Biddle is archaeological, one can easily see why Bernard of Clairvaux viewed Henry as a churchman driven by desire to outdo any of his peers in the realm.

The essays that relate to Henry's cultural patronage deliver a similar picture of someone eager to be at the forefront of artistic and literary endeavour. Claire Donovan's essay 'Bishop Henry's Bible' enters a subject on which there has been considerable debate among art historians, in particular relating to the dating of its various elements. She sees the production of this remarkable manuscript, still in the possession of the cathedral, as reflecting a continuous process, even if it would remain incomplete on Henry's death. She argues that in its way it does reflect Henry's vision and gift to the community at Winchester.

While Henry's literary patronage has received less attention, William Kynan-Wilson argues (from limited textual evidence) that the references made to his erudition, most famously by William of Malmesbury, should not be discounted. In a way, Henry saw himself as wanting to emulate Rome, and Cicero in particular in seeking to combine learning and statesmanship. There is a similar perspective in Matthew Mesley's study of Henry through a range of twelfth-century texts, including the Scriptura, written in his name and preserved within an account of the abbots of Glastonbury, a role that Henry never officially relinquished.

A final essay by Edmund King on Henry's last days provides a fitting coda to a richly informed volume that deserves the attention of all scholars interested in this remarkable figure of twelfth-century England.