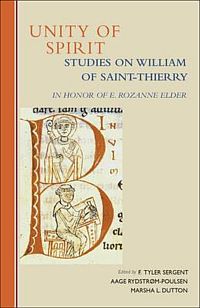 William was born about 1080 at Liège and became a monk at the Benedictine monastery of Saint Nicaise in Reims. In 1118/19 he visited Clairvaux and formed a life-long friendship with Saint Bernard. A year later, he was elected abbot of Saint-Thierry. He longed to retire to Clairvaux with his friend, but Bernard urged him to stay in his own monastery and care for the monks whom God had entrusted to him. In 1135 William retired to the new Cistercian abbey of Signy, where he died in 1148. William was an original and prolific writer, producing over his lifetime eighteen works of spirituality, polemics, exegesis, and hagiography, of which the most famous is the first book of the Vita Prima Sancti Bernardi. William's works have often been confused with those of Saint Bernard, and it has been the work of Cistercian Publications and especially of E. Rozanne Elder that has given today's scholars easily accessible modern translations of his works and restored William to his rightful place among medieval theologians.

Two of the essays in the collection contrast the works of Bernard and William. Emero Stiegman focuses on two of Williams works, On the Nature and Dignity of Love and On Contemplating God. These two works were bound with Bernard's On Loving God in a twelfth century manuscript with the title Book of Love, attributed to Bernard. Stiegman demonstrates that this conflation has obscured the very real differences in the two writers' approaches to the beginning of the soul's journey to God. To William, always the more Augustinian of the two, the soul's quest begins in dogma, as the soul realizes that it is made in the image and likeness of the Triune God. For Bernard the soul's journey is independent of theology and open to all, as it begins with the soul's experience of God's love. Rose Marie Tillisch compares the concepts of humility and humiliation in William's Exposition on the Song of Songs and Bernard's eighty-six sermons on the subject. William focuses on the humiliation of Christ in taking on human form and sees the bride in the Song as confessing her sins. Bernard views Christ as humility itself and the bride as being united with him only because her sins have been forgiven. Tillisch suggests that both authors felt compelled to discuss humility in such depth as a reaction against the cold logic and reliance on reason of Peter Abelard.

Four of the essays in the collection deal with the theology contained in William's individual works. The theme of humility occurs again in Aage Rydstrøm Poulsen's extension of Elder's work on the Christology of William of Saint-Thierry. The ascent to God by faith occurs in three stages: the carnal, the rational and the spiritual. For William, Christ is always the teacher and guide, because human beings can do nothing without him. Poulson points out that for William the journey to God is also a descent into humility, just as Christ humbled himself by becoming man and allowing himself to suffer death. Mark DelCogliano discusses the florilegium in which William compiled extracts from the commentary of Saint Ambrose on the Song of Songs, either as research for his own later work or, less likely, as a refutation of Peter Abelard. DelCogliano focuses specifically on the five passages that form the prologue to William's work, which are not from Ambrose's commentary on the Song, but from some of his other works. Two of the passages explain that the Song is to be read as an allegory for the union of Christ and the soul, two discuss the stages of spiritual growth, and the last one is an exhortation to readers to use the work to their own benefit.

David Bell offers a new edition and translation of the Prayer of Dom William, which he considers an early work, left unfinished, whose ideas found fuller expression in Meditations 6 and 10. The Prayer contains two separate themes. The first concerns the three types of visions, the corporalia, in which we see with our physical eyes; the spiritualia, in which we see with our imaginations; and the intellectualia, in which we experience true union with God without a sensory component. The Prayer also deals with the question of where we see God, since putting God in a particular place would limit him. Therefore, William states that we experience God from within the consubstantiality of the Trinity.

Sister Benedicta Ward takes up the question of how much William of Saint-Thierry and other western medieval writers knew about the early monks of the Egyptian desert. All of them, including William, praise the monks Macarius, Paphnutius, Pambo, and Isidore, but there is no evidence that they were actually familiar with the Sayings of the Fathers and other similar works. Such quotations as the westerners, including William, offer come only from Saint John Cassian and from the Life of Antony by Athanasius. Only in the letters from Peter Abelard to Heloise are there actual quotations and evidence of a deeper knowledge of the desert Fathers.

Two of the essays deal with William's best-known work, the first book of the Vita Prima Sancti Bernardi. James France analyzes stained glass panels from the Cistercian monasteries of Altenberg and Saint Apern in Germany, which were made in Cologne in the first third of the sixteenth century. The panels illustrate the stories drawn from the Vita Prima of three occasions on which Bernard was tempted to sin against chastity. France points out that Bernard and William were close friends and spent an extended period together in the mid-1120s while they were both recuperating from serious illness at Clairvaux. He holds out the possibility that these stories, with all their vivid details, are more than mere hagiographical commonplaces and in fact represent real confidences from Bernard to William. Marjory Lange also analyzes the chastity stories in her essay exploring the rhetorical devices used by William of Saint-Thierry in the Vita Prima, which lift the work out of the realm of uncritical hagiography and make it a compelling portrait of a man and a saint. Lange illustrates William's masterful use of undated incidents like the chastity stories to strengthen his narrative. By grouping the stories tightly between the death of Bernard's mother and his entrance into the monastery, William highlights Bernard's spiritual growth. Similarly, William's insertion of himself into the narrative at various points establishes him as an authority and eye-witness while emphasizing Bernard's superior role as a healer and teacher.

Finally, in the essay that gives the book its title, F. Tyler Sergent analyzes the occurrence of the phrase unitas spiritus in Christian writing from the fourth through the twelfth centuries and finds only three different meanings. The first and most common usage refers to the unity of believers in the Church. Two early Christian writers, Augustine of Hippo and Hilary of Poitiers, use the phrase in reference to the three persons of the Trinity. Only William of Saint-Thierry and Guerric of Igny use it to mean the unity of the soul with God. William's is the earliest reference, dating from the 1120s, and thus Sergent shows that William made a significant original contribution to Christian spirituality.

Scholars will appreciate the details of William's life and works contained in the introduction to this volume, the complete list of the various editions in both Latin and English of William's works, the detailed general bibliography, and the comprehensive index. Those who have benefitted from E. Rozanne Elder's scholarship and her labors on behalf of Cistercian Publications and the International Congress on Medieval Studies will treasure this volume for the tributes and reminiscences offered by Bernard McGinn, Dom Brendan Freeman, OCSO, Father Luke Anderson, OCist, and John Sommerfeldt. A somewhat unusual feature of the volume is a special index of post-medieval figures, scholars whose work has been cited in these essays. By this point, no reader will be surprised to see that the largest number of citations belongs to none other than E. Rozanne Elder herself!