Sigrid Danielson / Evan A. Gatti (ed.): Envisioning the Bishop. Images and the Episcopacy in the Middle Ages, Turnhout: Brepols 2014 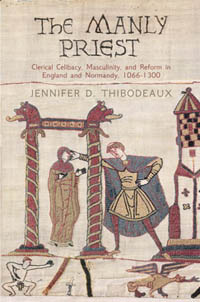 Jennifer Thibodeaux's study, The Manly Priest, paints a detailed picture of the Anglo-Norman Church in transition to a celibate priesthood during the period 1066-1300, a time and place fortunately rich in primary sources dealing with the subject. What sets this work apart is its disciplined focus on the issue of masculinity and the new standard of manliness required by the imposition of celibacy on the clergy. The author begins by discussing the definition of masculinity in the Anglo-Norman world, a standard which the married clergy shared. Masculinity was defined by the ability to father sons and to protect and provide for the family. Anglo-Norman noble society was based on extended kinship networks, and clerics were not only part of these groupings themselves but also created their own networks through marriage and the inheritance of benefices. Many of the bishops were married, and often the priest or one of his family members was the local lord, owning both the land and the church itself. Once celibacy was imposed, a new definition of masculinity was required, one based on self-restraint, orderliness, and chastity. The celibate priest now struggled against sexual temptation as his knightly neighbor struggled against an armed enemy.

Clerical marriage persisted in England and Normandy well into the twelfth century because it was firmly imbedded in society. For example, in 1076 at the synod of Winchester, Archbishop Lanfranc of Canterbury allowed already married priests to keep their wives, but forbade the ordination of any more married men. It was not until 1102 that all married priests in England were required to leave their wives. Suppression of the rights of priests' sons also moved in stages. First the inheritance of benefices was restricted, then the ordination of sons born after the father's ordination was banned, and finally the ordination of priests' sons was entirely prohibited except within a monastery. Resistance was strong, and in 1102 Archbishop Anselm of Canterbury had to write to Pope Pascal II because so many priests had chosen to resign rather than give up their wives that a shortage had resulted. Anselm was therefore granted the right to make dispensations locally to allow individual priests to remain with their wives if necessary.

The position of priests' sons was particularly difficult during this reform period, and Thibodeaux is at her best in describing their plight. Thanks to the richness of her sources and her skill in selecting among them, the reader hears the authentic voices of clerical sons like Serlo of Bayeux, Thibaud d'Étampes and the Norman Anonymous. Naturally these authors argued that faithfulness in marriage was a type of continence and that restrictions might lead to worse kinds of sexual sins. Their personal pain is evident in passages accusing the reformers not only of depriving them of their livelihoods but also of dishonoring them socially by encouraging the laity to avoid their services. Not surprisingly, such defenders of clerical marriage and the rights of priests' sons also accused the reformers themselves of being the unnatural ones and hurled accusations of sodomy at them.

As the thirteenth century dawned, the Church moved toward an expanded definition of religious manliness, which now frowned not just upon marriage but also on drunkenness, gluttony, gambling, fighting, cursing, gossip, and even hunting, participating in sports, and visiting taverns. The Fourth Lateran Council in 1215 established an enforcement mechanism by mandating visitations by local bishops, and Pope Innocent III (1198-1216) instituted reforms designed to speed up discipline by reducing the number of witnesses needed to initiate proceedings. Accused priests might clear themselves by a process known as canonical purgation. The priest first swore an oath on the gospels that he was innocent of the charge and then produced a number of witnesses, called compurgators, to swear that they believed him.

Thibodeaux makes extensive use of the register of Archbishop Odo Rigaldus of Rouen, who required errant clerics to sign diffamationes, or letters of defamation, acknowledging their faults. Typically the priests promised to pay fines, to resign from their positions, or to exchange their churches for others if they transgressed again. The diffamationes were formulaic and did not allow the accused clerics to speak for themselves, but nevertheless Thibodeaux uses these documents to construct a picture of the position of the lower clergy during this transitional period. She demonstrates that, over 100 years after clerical marriage had been officially banned, many of the accused priests were in stable, long-term relationships with their concubines that were marriages in all but the name. Some of them hid their concubines in other villages, including, for example, the priest of Sauchy-au-Bosc, who kept one woman in the parish of Berengeville and another at Coqueraumont.

The example of Walter, rector of Aronville, is especially interesting. Accused of sexual misconduct in 1261, Walter was unable to produce seven compurgators and therefore failed his canonical purgation on two separate occasions over a period of six months. He then appealed, stating that he did not think a canonical purgation requiring so many compurgators was realistic because he lived so far from Rouen that he could not find seven priests willing to travel there with him for the proceedings. He stated that the archbishop had not sufficiently investigated his case and urged him to interview both his parishioners and the priests in neighboring churches. There is some evidence in the appeal that Walter was actually guilty, since the document acknowledges that although he greatly loved the woman, he would give her up and would be willing to sign a diffamatio promising to resign his position if he were accused again. Despite his guilt, Walter seems to have felt confident that his parishioners and fellow priests would stand up for him, which is a testament to the degree of acceptance that such clerical relationships still enjoyed.

Thibodeaux's masterful use of anecdotes like the story of Walter of Aronville makes what could have been a very dull subject come alive. More important, the discussion of masculinity that is carefully woven throughout the book drives home to the reader the magnitude of the changes imposed upon the clergy during this reform period. It was not simply a matter of the denial of sexual relations to the current generation of priests and the necessity for their offspring to find new occupations. Rather the new requirements struck at the very heart of what it meant for the priest to be a man. As married priests, they had shared their parishioners' concern for kinship, property and family. They had frequented taverns and played at sports, gambled, eaten, drunk, and even fought with them. By 1300 the priest was held to a different standard of masculinity and the common ground that they had shared with the men in their congregations was now closed off to them. A higher standard it may have been, but it also made for a lonely life.

The Manly Priest will most naturally attract students of masculinity and sexual identity, as well as those specifically interested in the question of clerical celibacy. In addition, Thibodeaux's remarkable ability to capture the thoughts and feelings of the people who lived through these momentous changes should earn her work a place in the library of anyone interested in the Gregorian Reform.