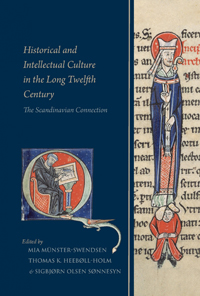 This volume of sixteen essays is the outgrowth of a transdisciplinary project on Danish historiography in a European context put together by the eminent Latin philologist Karsten Friis-Jensen and medieval historian Mia Münster-Swendsen. The collection is dedicated to Friis-Jensen, who died suddenly in 2012 before the project could be finished. It concludes with an article by Michael Winterbottom pulling together Friis-Jensen's unfinished work on a new edition of the chronicler Sven Aggesen's several works, in the hope this will enable future scholars to continue where he left off.

The editors have grouped the essays in the present collection into four sections: 1. The Writing of History: European Context and Points of Comparison, 2. The English Connection, 3. Liturgy and History, and 4. New Perspectives on Danish Historical Writing. A useful introduction explores some of the ways in which the essays in these sections relate to one another, and the reader will have no difficulty finding many more ways in which the various contributions enhance and reinforce one another in this tightly woven collection.

The volume begins with Elizabeth Van Houts' article enumerating the many ways in which women influenced the writing of history. Most of her examples are Anglo-Norman, but many of the families chronicled had Scandinavian roots, and many of the historians themselves were of mixed English and Norman parentage. This essay describes the milieu in which Scandinavian historical writing developed and provides interesting background to the section on ties between English and Scandinavian chronicles. Rodney Thomson discusses the portrayal of Scandinavians in the works of William of Malmesbury, noting that the only truly Scandinavian material reappears later in the Icelandic sagas and concluding that it probably came to William orally. Michael Gelting considers the sources of the Roskilde Chronicle, especially Henry of Huntingdon as the chronicle's source for the Danish invasions of England in the ninth century. Since both Henry and the Roskilde chronicler wrote in the 1130s, this testifies to the closeness of the ties between the two countries at the time. In the third essay, Michael Winterbottom offers a highly technical discussion of the poetic style of Aelnoth, an eleventh century Canterbury monk who relocated to Denmark and wrote a verse life of King Canute IV. He finds significant parallels between Aelnoth's work and that of the English monk and poet Aldhelm (d. 710).

Several other essays can be grouped with the preceding three if the topic is broadened to cover interrelationships between Danish and non-Scandinavian sources. For example, two events took place in the late twelfth century which linked Paris and Reims with Denmark and the archdiocese of Lund. The first was King Philip Augustus's repudiation of his wife Ingeborg, the daughter of King Valdemar I of Denmark, shortly after their marriage in 1193. The second was the theft of funds deposited by Archbishop Eskil of Lund at the abbey of Saint Victor in Paris. Two essays in the collection analyze the effect of the resulting Franco-Danish network on historical writing in Denmark during this period. It has been suggested that Ralph Niger, an Englishman who spent a large part of his career at the archiepiscopal court at Reims, relied upon a lost chronicle for his detailed information about Scandinavian affairs, but Mia Münster-Swendsen convincingly analyzes this well-developed Franco-Danish network centered in northern France and concludes that it is more likely that Ralph Niger obtained his information from personal contact with visiting members of the Danish clergy, perhaps including Archbishop Eskil of Lund himself. Similarly, Thomas K. Heebøll-Holm examines the two vitae and the letter collection of Saint William of Aebelholt, the French-born abbot of the Danish monastery of Saint Thomas of the Paraclete, who was canonized in 1203. He demonstrates that these works, prepared in support of the canonization, served the political interests of Archbishop Andrew Sunesen of Lund by helping repair relations with the French church, which had been damaged by the marriage crisis.

The article by Thomas Foerster focuses on the portrayal of imperial power and genealogy in the Gesta Danorum of Saxo Grammaticus, finding numerous similarities in both style and content between Saxo's work and that of Godfrey of Viterbo, a chaplain and scribe employed at the Hohenstaufen court in the 1180s. Godfrey postulated a single imperial bloodline, which he called the imperialis prosapia, which had ruled since the dawn of time and would continue to do so until the end, encompassing such ancient figures as Charlemagne and the Emperor Augustus and, of course, the Hohenstaufen.

Several other essays deal with the use of models in the writing of history. Alheydis Plassmann's article discusses the portrayal of Bishop Adalbert of Hamburg-Bremen (d. 1071) in the third book of Adam of Bremen's Gesta Hammaburgensis ecclesiae pontificum. By analyzing a number of episcopal Gesta, she constructs a model of right conduct for bishops and describes how Bishop Adalbert conformed to this model in his care for his diocese, but fell short because of his preoccupation with obtaining royal favor. C. Stephen Jaeger compares the dynastic histories of Dudo of St.-Quentin and Saxo Grammaticus in terms of the concept of charismatic culture, which stands in contrast to textual culture and emphasizes action, presence and performance. Dudo's history of the Norman dukes is forward looking, portraying the earliest Norman leaders as barbarians and documenting their transformation into brave and pious leaders, all in conformance to God's overarching plan. However, Saxo's account is the opposite; beginning with the heroic past and recounting the decline of the Danish monarchs in later years. Jenny Benham's article, "Writing Peace, Writing War," compares Roger of Howden's account of the battles and peace conferences in the last months of the reign of Henry II of England with the description by Saxo Grammaticus of the conquest of Pomerania. Benham demonstrates that both authors used stock models of military encounters in their works, and cautions against relying on either author for the details of actual military encounters.

The three essays in the History and Liturgy section consider the ways in which royal saints' vitae were shaped by their use in the liturgy. Sigbjørn Sønnesyn considers the Odense cycle of historical narratives, encompassing the Tabula Othiniesis, the Passio Sancti Kanuti Regis et Martiris, and the Gesta Swenomagni regis et filiorum eius et passio gloriosissimi Canuti regis et martyris by Aelnoth. Rather than being factual recitations of the historical record or tracts written to support a particular agenda, as has often been argued, Sønnesyn shows that these three works were designed to be divided up and used as readings in the Divine Office on the saints' feast days. Their primary purpose was therefore to lead the audience to follow Cnut as he followed Christ. Roman Hankeln analyzes chants in honor of Saints Cnut, Olav and Cnut Lavard, noting their emphasis on the saints' virtues and miracles, and showing that music and text interact to highlight these main points. Similarly, Nils Petersen discusses the office for the feast of Saint Cnut Lavard, whom recent writing has made into an example of Danish expansionist policies around 1200. He demonstrates that the music of the liturgical chants reinforces the text, which celebrates Cnut's humility, piety, and protection of the poor.

Two other essays consider how accounts of the same event can differ when they are written at different points in time. Lasse C. A. Sonne discusses the ways in which Scandinavian portrayals of the region's pagan past written in the twelfth century differ from those written in the thirteenth and fourteenth centuries. Twelfth century authors merely characterized paganism as evil, showing little interest in the specifics. Later authors discussed pagan customs in more detail, constructing a uniquely northern non-Christian past. Nora Berend's essay on the Christianization of Hungary analyzes the different ways in which the process was described in Hungarian chronicles, many written long after the events had taken place, using as examples the various accounts of Saint Stephen, the first Christian king. Some chronicles emphasized the imposition of the new religion by force, while others suggested willing acceptance brought about by the king's persuasion and good example.

The present volume is indispensable for anyone working on Danish history or medieval historiography in general. Its emphasis on major questions and trends in historiographical studies also makes it a good addition to a graduate level seminar on the subject.