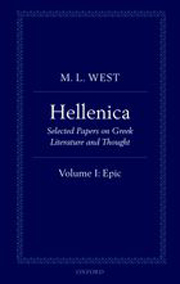 The first of a projected three-volume series of collected papers, M.L. West's Hellenica: Epic brings together articles and lectures, some previously unpublished as such, that cover general views on the subject, textual cruces, Greek and extra-Greek intertextuality, music and meter, questions about the possible authors of those poems, and other matters. For the previously published work, the author in some places has made minor corrections and brought references up to date, and there are supplementary notes that conclude some articles to indicate new resources and changes in West's views. The whole text is entirely re-typeset, but the pagination of the original publication is marked by a vertical bar and the number in superscript. The papers are, nevertheless, not presented exactly in their original form; there are some purposeful omissions (e.g. in ch. 11). A supplementary list of West's publications dealing with pre-Hellenistic epic comes at the end of the papers (437-441), followed by an index of Greek words, an index of passages, and a general index. West has sealed almost every page of these papers with some mark of an enjoyable prose style, a welcome form into which academic writing is too rarely cast.

As might be expected, the Iliad and the Odyssey come most to the fore in these papers, but they are not the sole arenas of investigation. The works of Hesiod and the Argonautica (Orphic and Apollonian) appear, but also lesser-known names and titles like Eumelos of Corinth (353-391), Magnes of Smyrna (344-352), and Aethiopis (242-264). Later epic, such as that of Nonnos of Panopolis, is generally not treated. [1] Some of the papers cover broad questions of the genre of Greek epic, while others have as their focus a single passage. There are surveys such as chapter 1, "Greek Poetry 2000-700 BC", and chapter 4, "The Rise of the Greek Epic" (which borrows the title of Gilbert Murray's 1907 book). Papers that touch broad themes include chapter 11, "The Singing of Homer", and chapter 14, "The Transition from Oral to Written". Chapter 27, "The View from Lesbos", addresses the question of acquaintance with Greek epic material on the island, and West argues in chapter 28, "The Invention of Homer", for "Homer" as a constructed author, not a flesh-and-blood maker of those poems that traditionally - but not, at least, for the first century of their circulation, West says - bear his name (cf. chapter 17, "The Date of the Iliad"). More focused studies include the linguistic examination, "An Unrecognized Injunctive Usage in Greek" (chapter 3), with a close look at four passages from Greek epic, and "Grated Cheese Fit for Heroes" (chapter 10), on a scene in book 11 of the Iliad. Three chapters consider a kind of possible intertextuality between "Homer" and other Greek poetry (chapter 18, "Echoes of Hesiod and Elegy in the Iliad"; chapter 20, "Iliad and Aethiopis"; and chapter 22, "Odyssey and Argonautica").

Throughout the span of papers, West indicates his close familiarity with the scholarship on every passage he discusses (and a good deal beyond), and he is equally well-acquainted with the secondary sources from antiquity and late antiquity such as the scholia. From these papers the author emerges as a very competent scholar of the fields that come to make up expertise in Greek epic, including myth, linguistics, history, and poetics.

There are, of course, debatable interpretations here as in every field of scholarship, and West argues his views forcibly, but by paying close attention to the secondary literature he cites, no reader will be led to believe that this or that view is in fact more or less widely accepted than it is. One area that pervades much of the volume is that of the oral-formulaic theory of epic composition associated especially with Milman Parry and Albert Lord - with many more recent adherents, including Gregory Nagy, a review of whose Best of the Achaeans is included here (25-28) and whose review of West's edition of the Iliad West also responds to here (176-181) - especially Lord's book The Singer of Tales (1960): West notes some value in the approach, but certainly not as the sole guide for researchers of early Greek poetry.

Some of the papers will be too technical for general readers, but much of the volume remains accessible in part, if not in whole. That class of potential browsers, if they are without Greek, must be warned that there are many untranslated lines of Greek verse, but the context in which they are given, of course, goes some way toward indicating their content.

In this digital age in which our search for and acquisition of individual articles is facilitated by online journal databases and electronic files, collected volumes such as this one remind us both of the importance and the pleasure of perusing an author's writing across several decades and through related themes. Philologists, historians, linguists of Indo-European, and lovers of literature will all find papers here of great interest.