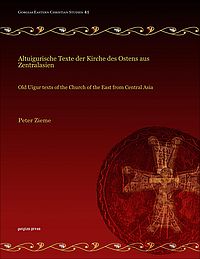 Among the prodigious discoveries resulting from the colonialist (Prussian/German, French, Russian, Japanese) expeditions in Central Asia are a large number of texts in an early Turkic language known as Old Uyghur. [1] The explorer Sven Hedin, and scholars such as Aurel Stein, Paul Pelliot, and others, travelled over and through various parts of the old so-called Seidenstrasse(n)/Silk Road(s) of Central Asia and "acquired" - not infrequently by questionable means - for their government patrons archeological remains and hoards of texts in a bewildering number of languages and scripts, some of which were yet to be deciphered.

Old Uyghur (variously spelled, and also included more generally within Old Turkic) belongs to the Turkic language family. Closely related to Old Uyghur, and with it forming the corpus of Old Turkic, are the language of certain inscriptions written in a runiform script in the seventh to the tenth centuries and that of a group of texts from the eleventh century under the Karakhanid Khanate, mostly in Arabic script. The Uyghur texts in mind here, dating from perhaps the ninth to the thirteenth centuries, are written in a variety of scripts. Some Christian texts are written in Syriac script, but Uyghur script, adapted from Sogdian script, is the most common. [2]

A. von Le Coq and F.W.K. Müller [3] were among the first to study the Old Uyghur materials from Central Asia, and in the coming decades, thanks to the work of a number of scholars, the field found a firm philological footing within Turcology. The classic grammar for Old Uyghur is A. von Gabain's Alttürkische Grammatik, the latest edition being the third (1974), and it may still be used with profit. [4] More recently has appeared M. Erdal's Grammar of Old Turkic (2004). [5] The chief lexical resources are G. Clauson's Dictionary of Pre-Thirteenth Century Turkish (1972) and K. Röhrborn's Uigurisches Wörterbuch (1977-1988). [6] Von Gabain's grammar also includes a glossary for the texts in her chrestomathy, as does Zieme's book under review here.

A. von Le Coq, F.W.K. Müller, W. Bang-Kaup, A. von Gabain, and other scholars have worked on Old Uyghur texts, Christian and otherwise, for over a century now, and one of the most prolific contributors to this field in recent decades is P. Zieme. In an astoundingly long list of publications, Zieme has published, translated, and commented on a great number of Old Uyghur texts. Many of the texts published here have first appeared under Zieme's name elsewhere, but scholars and students interested in Old Uyghur Christian texts now have them collected together, with updated editions, translations, and annotations in a single volume by a scholar with long experience of having studied them.

A few words about the presentation of the book itself are in order. Aside from the Turkic texts themselves, the book is in German, except for a two-page preface in English (7-8), yet the title of the book is also given in English both on the cover and the title-page. This could confuse some prospective readers. The book is large format, which means many characters per line on each page, but the font size is large enough that reading is not difficult.

The texts are not all presented in the same way. Both Syriac script and Uyghur script are consonant-based (technically speaking, abjads), with consonant signs also being used, more or less, for certain vowels. This means that one could present a text edition only with the consonant signs; this is called transliteration (this is usual with Sogdian texts, for example). Through comparative Turkic linguistics (and Old Turkic written in other scripts), we also know a lot about the shapes, phonological and morphological, of Old Uyghur words, and one can thus also present a text edition based on that knowledge in combination with the consonantal data; this is called transcription. Ideally, an Old Uyghur text would be presented in transliteration and transcription, and indeed Zieme very often does so, whether line-by-line or with full transliteration and then full transcription. One text, however, only has a transcription; Zieme remarks on 51, n. 229, that the reason for only giving a transcription is that the text has been published more than once before, but for completeness, a transliteration would have been appreciated. Overall across the texts, a more uniform presentation would have been preferable, with both transliteration and transcription, whether line-by-line together or with transcription following transliteration.

Zieme's introduction (11-26) covers the presence of the Syriac Church of the East (elsewhere sometimes still encountered under the name "Nestorianism", which should be avoided; [10]), Syriac and Old Uyghur tomb inscriptions, an overview of the Christian texts in Old Uyghur, the terms for "Christian" (e.g. tarsa/tarsak [of Iranian origin] and ärkägün), the scripts used for these texts, characteristics of the language (compared with other Old Uyghur materials), and finally a brief look at the places where the texts were found, that is, Turfan and Kharakhoto (there being only indirect evidence of Turkic-speaking Christians at Dunhuang). A more detailed overview of the actual text fragments ("Bestandsaufnahme") follows the introduction (27-40).

After the introductory sections, there are then chapters of varying length on each of the twenty-three texts that Zieme covers in the volume. Most, but not all, of these chapters include the text in transliteration and/or transcription, along with an annotated German translation. Aside from introductory images of a word or phrase from each text to start the chapters and occasional images in the notes, there are no plates, and there is no presentation of the texts in the original script, whether Uyghur or Syriac. (This is, in any case, difficult to do for Uyghur, since there is not yet a Unicode form of Uyghur script.) The lack of plates is not really a problem, though, since images of the majority of the manuscripts, generally quite legible, are freely available at the Digitales Turfan-Archiv (http://turfan.bbaw.de/dta/index.html), with the Uyghur materials specifically accessible at http://turfan.bbaw.de/dta/u/dta_u_index.htm.

The book concludes with several helpful resources. First, there is an index of proper names, with brief discussion (179-193). Next, there are glossaries (Uyghur-German) for the texts, divided into the Turfan materials (196-264) and the Kharakhoto materials (265-284). These glossaries also function as concordances, with occurrences also grammatically divided. For example, under "bul- finden" we have three occurrences: b.-tιlar (B 14), b.-sarsizlär (B 06), and b.-zunlar (H 11), with the text and line number for each occurence indicated. As there are a number of Syriac expressions occurring in these texts, Zieme provides an index of these (285).

It will be obvious that this volume presents us with the most up-to-date collection and presentation of Christian texts in Old Uyghur, and it thus makes a major contribution to our ability to better understand the textual situation of Christianity in Central Asia. There is still work to be done on these texts, philological and otherwise, but this volume will long remain the starting point for the Old Uyghur textual witness to communities of the Church of the East in and around Turfan from around the ninth century up to the thirteenth or fourteenth centuries. Readers who study Central Asia, the Church of the East, and/or Turkic languages have cause to rejoice at the volume's appearance and will find much of fruitful interest throughout the work.