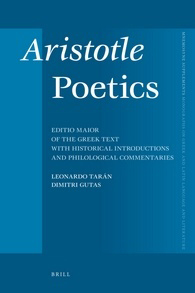 In the Aristotelian corpus the Poetics occupies a place that has at some times been almost ignored and at other times attracted intense philological and literary interest. It was not copied as often as other Aristotelian works, and in the earliest surviving manuscripts that contain several Aristotelian philosophical works, the Poetics is absent; that is, the Poetics is a work apart. The commentators of Late Antiquity wrote no works on the Poetics, and more marginal interest only touched on chs. 20-22 on linguistics, diction, and style. This changed in the Renaissance, when literary interests, as well as the accessibility of Greek manuscripts and then editions, encouraged readers to study it. A more accurate Greek text and a better understanding of its transmission gradually began to emerge especially in the late nineteenth century. Not too long ago, Aristotle and the Poetics even achieved some notoriety on a more popular level: the lost second book of the work, which considered comedy as the first book considered tragedy, had a notable role in Umberto Eco's Il nome della rosa. (As Tarán points out [33], the broader transition from roll to codex may have effected the loss of that sought-after second book.)

There are four primary witnesses - surviving manuscripts in Greek or in translation that are distinct from each other yet which all point back on the whole to a single archetype - to the text of the Poetics: 1. Parisinus Graecus 1741 (middle or second half of the 10th century), 2. Riccardianus 46 (probably the middle of the 12th century; incomplete and damaged), 3. William of Moerbeke's Latin translation (completed in 1278), and 4. the Arabic translation of Abū Bišr Mattá (d. 940), which survives in only one manuscript, Parisinus Arabus 2346 (not a particularly good copy), but that translation itself being based not directly on any Greek text, but on a Syriac translation no longer extant, save for a short (and adapted) excerpt of the description of tragedy in 1449b24-1450a10 that survives in Severos bar &#352akko's (d. 1241) Book of Dialogues. The aforementioned Latin translation was not published until 1953, and it was hardly well known before that, and for some time it was mainly from Hermannus Alemannus' Latin version (1256) of Averroes' Middle Commentary that there was any knowledge, such as it was, about the Poetics in the west. Giorgio Valla made a Latin translation of the Poetics from a Greek manuscript he owned, and that translation, published in 1498, even with its faults, brought the Poetics further to the fore for readers without the ability to read Greek or without access to some copy of the Greek text.