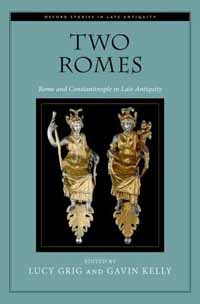 This collection of seventeen articles, co-edited by Lucy Grig and Gavin Kelly, explores topics of interest to historians of late antique Rome and Constantinople. The book is proportionally divided into five sections, with one additional essay as the epilogue of part VI. The sections are devoted to separate aspects of the parallel development of Rome and Constantinople, including topography and panegyrics, and the contributions display "a broad range of disciplinary approaches" (5).

Part I begins with an introductory essay (nr. 1), in which the editors discuss the meaning of the two capitals in Late Antiquity, giving a detailed explanation of the criteria and of the goals of the collection, and also summarizing some of the results achieved by the volume. The transformation in the year 330 of Byzantium into Constantinople strongly reduced the primacy of Rome, despite the fact that at that time the capital had not been a real residence for the emperors for more than a century. Although the editors do not give credence to Ioannes Lydos (De Mens. 4,2) on the ceremony of the foundation of Constantinople and the role of the Roman pagan senator Vettius Agorius Praetextatus (cf. 10 n. 33), on the other hand it is remarkable that the city of Constantine was not thoroughly Christianized in the first critical years of its existence, as it grew and began to compete with the urbs aeterna and its thousand-year-old Senate. In essay nr. 2 Grig focuses on the literary depictions of these cities, as well as on artistic representations of them (including representations of the cities on coinage and the more recent Tabula Peutingeriana). She also examines their topographies, which are studied in comparison with those of other imperial capitals and important towns. Ammianus' description of Rome during the visit of Constantius II in 357 is an important representation of the monumental part of the city on "a super-human scale". The Curiosum of Rome and of two Notitiae Urbis, respectively Romae and Constantinopolitanae, which are divided into fourteen regions, are expressions of this claim of monumentality. Nevertheless, while the inventory of the buildings of the eastern capital included the churches, this is not the case for Rome. Ward-Parkins (nr. 3) focuses on the development of the urban space and the comparison between the two capitals. This comparison is possible especially for the fifth century, when Constantinople became the permanent residence of the emperors. As the author makes clear, there are practical difficulties in such a comparison, because the eastern capital was badly damaged by its transformation into an Ottoman town, which also has not yet been well excavated. His observations on the meaning and proportion of columns and obelisks in comparison are intriguing, and so are his discussions of the adoption of saints and the transfer of holy relics, the question of water supply, and his considerations on the domus.

Part II offers detailed discussions of some of the elements of the first section, and also develops the topographical approach. Matthews (nr. 4) offers a study, with English translation, of the forma Urbis of Constantinople, with some observations on the Antiquities - a work arising by Gilles' travels to the eastern capital a hundred years after the Ottoman conquest and the reports of the disappearing of monuments. This small inventory, which collects monuments and buildings grouped by region, is the product of a late antique bureaucrat of the fifth century and is extremely important for the understanding of the topography of this city, which lacks a methodical excavation as well as supporting documents of the genre of the Roman forma urbis Seueriana. The author's study of this important evidence acts as guide for the reader through late antique Constantinople. Crow (nr. 5) gives a very interesting study of the development of the water supply system of the new capital up to the time of Constantine V, in comparison to that of Rome. Machado (nr. 6), in the footsteps of some of his previous contributions, discusses the aristocratic houses of Rome and of Constantinople. Starting with the numbers provided by bureaucratic documents (Forma Urbis, Curiosum), and ending with some results of archeological excavations, the author traces the line of the transformation of the urban space of Rome from the Principate up to the Ostrogothic kingdom, also considering the ways that public spaces were appropriated, even to the point that "late Roman aristocratic houses were well integrated in the image of the city, occupying a prominent place in its topography" (157).

Part III deals with the emperors' sojourns in the cities. Starting from an article of Gillett (Rome, Ravenna and the Last Western Emperor, in PBSR 69, 2001) and S. Orlandi's book on the inscriptions of the Colosseum, through a deep analysis of the documents including the imperial law, Humphries (nr. 7) discusses in detail the particular relationship of Valentinian III with Rome, its Church and its Senate. It was in the old capital in fact that this emperor spent an unusually consistent part of his reign. An important appendix on the Fasti of the Urban Prefects of the years 425-455 amends and clarifies some of the uncertainties arising from PLRE II. Van Nuffelen (nr. 8) explores the question of the emperor's participation in the public ceremonies of Constantinople, which goes far beyond the traditional aduentus, by taking the distance from those scholars who look at them as simple occasions for acclamations. To support his theory, he considers in parallel the ecclesiastical rituals and the role of the bishops in fifth and early sixth centuries ceremonies: conflicts, competitions and popular violence are a significant part of the social life of the eastern capital.

Part IV represents to the reviewer the most important contribution of the volume. Four detailed pieces illustrate the meaning and development of the panegyric genre between Rome and Constantinople. Rees (nr. 9) explores the collection (including the manuscript tradition) of the twelve Panegyrici Latini with philological scrupulousness, and also examines the question of Pacatus as its editor and publisher. If Pacatus' sympathy for Rome is clear, so is Themistius' attachment to Constantinople. The two capitals are now equated, as Vanderspoel (nr. 10) notices in his investigation of Themistius' activity as an orator in both cities, including the panegyric delivered in Rome at the time of Constantius II's stay. Particularly striking are the author's observations on the similarities and on the structure of some orations (226-31). The other important panegyrist, Claudian, is discussed by Kelly (nr. 11), who, in his remarkable analysis of terminology, argues that this author rejected the idea of Constantinople as a new Rome by keeping his loyalty to the old capital. Claudian is also, together with Merobaudes, Sidonius Apollinaris and others authors, the object of Gillett's (nr. 12) striking piece, which analyzes the epic panegyric as a particular form of communication (cf. 281-4) to praise emperors as well as those generalissimos such as Stilicho and Aetius, who replaced the fifth century rulers in their military and administrative functions.

Part V, although occasionally seeming more distant from the focus of the volume, adds four excellent contributions on religious issues. Salway (nr. 13) explores the meaning of Constantinople in the Itinerarium Burdigalense, arguing that the eastern capital was already in 333 a remarkable destination, second only to the Holy Land. Curran (nr. 14) discusses in depth the meaning and importance of the Virgilian Cento of the poetess Proba in the fourth century process of conversion to Christianity by the Roman elite, which made use of pagan literary models. McLynn (nr. 15) treats the canonization of Constantinople during the council of 381 (esp. Canon 3) and the rise of the bishop of the new Rome as second only to the Pope. With the establishment of the Theodosian dynasty the Church of the eastern capital would increase its importance. On the other hand, between the second half of the fifth and the beginning of the sixth centuries, Rome experienced the establishment and reinforcement of the "Petrine ideology" - especially with the contributions of the Popes Leo and Hormisdas. This subject is very well discussed by Blaudeau (nr. 16). Although the old capital considered Constantinople to be of secondary importance, the second Rome often opposed this view, and the Acacian schism separated for thirty-five years the two sedes until 519, when a short-term harmony was achieved.

Part VI contains Kaldellis' final essay (nr. 17), an insightful contribution which, rather than simply concluding the collection, raises further questions. The author discusses the debate among historians on the question of "Byzantium's Roman Identity", which concerns the identity of the eastern Romans. After introducing key motifs such as "ethnicity" and "nation", he expresses his view of Byzantium as a nation-state, and announces his intention to argue in a separate study "that the Byzantines fit modern theoretical definitions for being a nation, and that they should join the rapidly expanding list of ancient and medieval peoples that are so understood" (393). The Byzantine Empire was the only direct continuation of the Roman res publica, and its rulers considered themselves as such until 1453.

On the whole this volume represents a significant contribution for the understanding of the role of the two most important cities of the Empire, especially during the fourth and fifth centuries. This valuable and specialized collection is also fluidly written and edited, making it a pleasure to read.