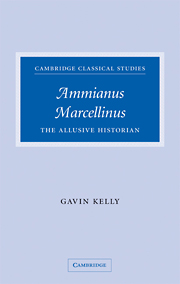 This book is a significant and creative contribution to the study of Amianus' Res Gestae (RG). Based on a doctoral thesis submitted at Oxford University in 2002, the text has been completely revised for publication.

Ammianus. The allusive historian adopts the critical perspective articulated by Timothy D. Barnes in Ammianus Marcellinus and the Representation of Historical Reality (1998) regarding the established view on Ammianus' claim to impartiality and veracity in RG, and responds to the challenge posed by Barnes that RG be studied as a work of literature rather than history. The allusive historian is an exhaustive and excellent study, a must-read for anyone with an interest in Ammianus. The book is not merely a further partial contribution to the field; rather, it shapes in new ways our knowledge and interpretation of the principles and methods of a thinker who until recently was regarded as the most reliable historian of the fourth century.

The book is structured in two parts: "The elusive historian", which centres on analysis of the autobiographical texts and comprises three chapters, "The bones of the battlefield", "The adventures of Ammianus" and "The limits of biography"; and "The allusive historian", in which the core thesis of the book is advanced over the course of four chapters: "Ammianus' intertextuality", "Sources", "The exemplary historian" and "Julian's monument". An Epilogue, an Appendix entitled "Sources for the tsunami of AD 365", indices, and a select bibliography updated to 2007 conclude the book. Provisional conclusions are drawn at the end of each chapter, through which Kelly gradually provides a new framework for understanding RG.

A commentary on the passage which contains a description of the aftermath of the battle between Romans and Goths in ad Salices in 377 (Amm. Marc. 31.7.16) is provided in "The bones on the battlefield", a detailed analysis that points out the vast amount of information of which the text is comprised. The inadequacy of an exclusively biographical interpretation of those passages in which Ammianus himself appears as a witness is thrown into sharp relief by this commentary. Kelly argues the case for intertextual relations with other texts in Latin literature (Verg. Aen. 12.35-6 y Tac. Ann. 1.6.1.2-3) which, along with intratextual relations, enrich the text with political meanings. This approach is followed in a systematic way throughout the book.

In Chapter 2, "The adventures of Ammianus," Kelly provides a list of autobiographical passages and focuses on the issue of the veracity of Ammianus' work, specifically with regard to the accusations of partisanship towards Ursicinius, and the effect on the text of narrative features such as ring composition and anticipation; the veracity of autobiographical passages which evince formal correspondence to literary precedents is also called into question.

"The tsunami" (88-101) is a revised version of a previous study [1] in which the account of the great earthquake and tsunami of 21 July A.D. 365 (26.10.15-19) is read in detail as a representative text wherein Ammianus used autopsy to lay claim to authority. Ammianus alludes to contemporary perspectives (Jerome, Chron. a.366, Comm. In c. xv Isaiae 5, Vita S. Hil. 40 and Sozomen, HE 6.3, etc.), and would also appear to have used and transformed the work of an ecclesiastical writer which the two ninth-century commentators were to defer to (see also the Appendix "Sources for the tsunami of AD 365", 322-331). Kelly's position in this regard is thought-provoking: the tsunami is a microcosm of the structure and central argument of Res Gestae - that Roman history after the reign of Julian draws to a close with a leaderless empire and the barbarians flooding through the gates (99-100).

A critical overview of the biographical information concerning Ammianus currently available is supplied in Chapter 3, "The limits of biography" (104-158).

In Part II, "The allusive historian", Kelly's first purpose is to analyse the form, extent, methods and meaning of allusion in RG, defining both intertextuality and allusion in general terms, and articulating the line of argument previously advanced by G.B. Conte, R.O.A.M. Lyne, Richard Thomas and Stephen Hinds. Given that it involves "authorial intention (defined loosely), and depends on the sharpness, or the imagination, of the readers" (166), and because it would appear to correspond more closely to Ammianus' own intentions, Kelly adopts the term allusion for the purposes of his account.

Firstly, the use of rare words as encompassing potentially meaningful references to their original contexts is analysed (192-198). A more extensive study of allusions is structured according to the mode of allusion (198-214): where the original is reversed; divided allusion, where the original is split into different parts of the text; punning alterations; alterations of context; cases where words are preserved and contexts transformed; 'glosses' on the original; 'window allusions'; and exempla. The 'window allusion' where Cicero had referred to milites gloriosi, Ammianus expanded his reference to the passage with allusions to Plautus' Miles gloriosus (Amm. Marc. 28.4.12 ~ Cic. Amic. 98 ~ Plaut. Mil. 46) is both apt and interesting in this regard.

An account of Ammianus' use of sources - in particular, the work of contemporary writers with whom he would appear to have struck up a dialogue, and which may be regarded as a nexus of allusion - is provided in chapter 5, "Sources" (222-255). In the first of his four chosen examples, the history of Constantius' obelisk, Kelly draws a comparison between Ammianus' account (Amm. Marc. 17.4.3) and an inscription on the base of the obelisk whose content has come down to us (ILS 736, CIL VI.1163). [2] "To readers who observed the intertextuality with the inscription, Ammianus' correction was visible; but it was not made obtrusive to those who could not spot it (...)." This process is, he concludes, analogous to the way in which Ammianus plays down the significance of Christianity in Roman politics by using allusive and coded language: "Those who understood the code might be expected to approve, while those who could not would not be in a position to detect bias" (230).

"The exemplary historian" offers a long and impressive selection of the use of exempla in RG. What most of the exempla do show is the creativity with which Ammianus combines and alters the originals, though not always with absolute accuracy. He uses them in a distinctive way, which may be contrasted with the use of such examples by some of his contemporaries, such as Libanius. The analysis of exempla relating to Gallus (284-293) is of particular interest. Ammianus argues repeatedly that knowledge of history is knowledge of exempla, and Gallus fails in this regard because he is incapable of understanding or recognising historical examples (Amm. Marc. 14.11.10, 22). In contrast to Gallus, Julian's historical learning enables him to imitate the behaviour of the ancients and to consider the recent past - for example, his brother's fate (17.1.14; 21.1.2).

"Julian's monument" (296-317) marks the high point of Kelly's theory, and is one of the most interesting chapters in the book. A quotation - opus moueo maius, maiorque mihi rerum nascitur ordo (Amm. Marc. 15.9.1 ~ Verg. Aen. 7.44-45) - and an allusion to the Aeneid (Amm. Marc. 25.10.5 ~ Virg. Aen. 6.873-874) book-end the sections dealing with Julian (15 to 25). Ammianus describes Julian as the last of the Roman heroes in 25.10.5., who - like Virgil's Marcellus - died before his time and deserves to be buried on the banks of the Tiber and conferred with the glory of the emperors. To Kelly's mind, "Julian's imaginary monument shares with the RG its subject, its location, its purpose: they share a belief enshrined in their structure in the continuity of the Roman Empire" (316). Kelly posits a real conflict in Ammianus' work between the exemplary and historical figures of Julian, principally in his role as sole ruler; in my view, the analysis of the historical Julian would still have to avail of significant manipulation of detail in order to defend Julian's virtues, as for example Ammianus does in his account of the Chalcedonian trials (Amm. Marc. 22.3).

At this stage in his analysis, Kelly articulates an intriguing overall interpretation of RG: "It may be suggested that a link would have been visible in the RG, when fully extant, between Strasbourg at the centre, and the two opposite ends of the work, Trajan in Book I and Adrianople in Book 31. Strasbourg is the node of the work, where Julian follows the example of Trajan and offers an example to Valens. Ammianus wrote of Trajan in the knowledge that Trajan has come before him; the account of Julian has foreknowledge that Valens and Adrianople would follow" (315-316). The argument concludes in the hope that the hypothesis it contains may be proven through more thorough-going study of the fragments from the lost books referred to above.

In the seventh and final chapter (318-321), Kelly examines the meaning and structure of the epilogue to RG (31.16.9). [3] Through his work Ammianus sought to join the great bilingual tradition of classical historiography. In reminding his readers that this work covered the period in history that followed on in the canon from the history written by Tacitus, Ammianus appended his own name to the roll-call of great Latin historians (Salustius, Livy and Tacitus). He also reminded them of his qualifications to write the history of his own time: that he had played a part in it (miles quondam), and his education (graecus). However, the work is not only bound up with the time which it narrates; it is also closely related to the time in which it was written (from 380 onwards); and indeed, interpretation of the exempla and internal references suggest that the work reflects implicit criticism of Theodosius' religious policies and his methods to appease the Goths.

In conclusion, the book under review is a magnificent study of Ammianus; its line of argument is impeccable, and Kelly's exhaustive use of the relevant sources and secondary bibliography both thought-provoking and astonishing. The study paints a new portrait of Ammianus, who used the devices of autopsy and allusion to serve his own purposes: to situate himself among the great names of historiography, to defend the glorious past of the pagan empire, and to present the reign of Julian, its final representative, as its crowning glory. That Kelly's determination to be clear at all times occasionally prompts unnecessary repetition of the partial conclusions he draws, especially in Part I, should be noted. Moreover, as he himself avers, a number of the intertextual relations he refers to are less than obvious and thus remain open to discussion. Nevertheless, the book is a significant contribution to our understanding of the complex intellectual world of Ammianus, the historian's extraordinary familiarity with Latin literature, and his ability to furnish a work of great value more in literary than in historical terms.

[3] The chapter incorporates material previously published in: Gavin Kelly: The Sphragis and Closure of the Res Gestae, in: Jan den Boeft / Daniël den Hengst / et al. (eds.): Ammianus after Julian: The reign of Valentinian and Valens in Books 26-31 of the Res Gestae, Leiden 2007, 219-241, and: Gavin Kelly: To forge their tongues to grander styles. Ammianus' Epilogue, in: John Marincola (ed.): A Companion to Greek and Roman Historiography, Oxford 2007.