R. W. Burgess / Michael Kulikowski: Mosaics of Time. The Latin Chronicle Traditions from the First Century BC to the Sixth Century AD. Volume I: A Historical Introduction to the Chronicle Genre from its Origins to the High Middle Ages, Turnhout: Brepols 2013 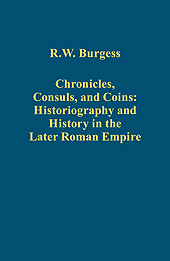 Burgess' book is a collection of fifteen articles produced over twenty years of intense research activity on the historiography of Late Antiquity. This scholar counts among the greatest specialists in the world for the studies of Chronicles, on which he is also working in a broad systematic project that will appear in the near future in more volumes. [1] Although the general focus of Burgess' collection are Chronicles, the first part concentrates on historiography and Quellenforschung, exploring especially Eusebius, Jerome and the Kaisergeschichte (essays nr. I-VIII), while the second part collects historical studies (essays nr. IX-XV), and two of the contributions include numismatics. Ten final pages of supplementary notes related to all the articles of the volume amend little inaccuracies and partially update the on-going scholarly discussions on the subjects. Despite the fact that the very specific philological investigations make some sections of this book extremely technical, the contributions are very well connected and even a non-specialist has the possibility to find the file rouge of this collection and to benefit from Burgess' study of the documents.

In the first article dedicated to Eusebius' Chronici Canonici and Historia Ecclesiastica (HE) Burgess through a detailed analysis and a methodical rejection of other scholars' theories suggests how a first edition of the Eusebius' Canones, which precedes the one of 325 AD, was completed after the year 306 (presumably around 311). The same can be said for his historical work, the first edition being written in 313/4. Together with the Martyrs, the Canones likely inspired the HE.

The second contribution suggests the methodological criteria for a hypothesis of reconstruction of the structure and contents of the lost original Chronica of Eusebius, which survives in the Latin version of Jerome also in the traditions of other authors, including the Armenian and the Syriac ones.

The third essay is a good explanatory introduction to Jerome's Chronicle, part of which relies on the above-mentioned lost Chronici Canones of Eusebius. Aware that Jerome's compilation has often been considered with skepticism by modern scholars, Burgess persuasively argues the importance of this work for the reconstruction of a broad chronology, and also for dating specific events (e.g. Catullus' and Sallust's births and deaths). In addition, Burgess discusses the several editions of this work, including their critical apparatus, showing that a new edition which amends small inaccuracies in chronology and which respects all the manuscripts is clearly needed. Highly important are also Jerome's own additions, which include his use of authorities such as a Livy's epitome, Suetonius, also the lost Kaisergeschichte (KG). To this last mysterious source are dedicated the next articles, nr. IV-VII.

In Burgess' book, Jerome represents an important connection between the initial essays on the Greek tradition of Eusebius and the ones of the Latin historians of the late fourth century, including the author of the KG. In article nr. IV, through convincing arguments and a detailed list of parallels Burgess proves once more Jerome's use in his Chronicle of the KG. This was originally hypothesized by Enmann (1883) but later discussed by other scholars. Essay nr. V is dedicated to the date of the KG, a work which is generally assumed to have been completed between 337 and 357 AD. Burgess rejects the first date, finding it more difficult to support for several reasons, one of them being some suspicious errors in the sources which scholars traditionally relate to the KG. Another element of support for the later date is found in the strong parallels of wordings and contents of the sources referring to the events up to the year 357, one of them being Jerome's Chronicle; this work precedes Ammianus' Res Gestae, the Epitome de Caesaribus and the Historia Augusta (cf. 119-122). The author's explanation of the highlighted similarities between different authors is that Jerome "was using the KG alone, not a combination of Eutropius and seven other works" (123). Burgess suggests also the name of Eusebius of Nantes as the author of the biographies of KG (128); he previously discussed this hypothesis in the article listed in this collection as nr. VI (in which cf. also 495-500, and where the possibility of a derivation from the KG of Ausonius' Tyranni is not dismissed). Nevertheless, both the date and authorship of KG are partially addressed in article nr. VII (189-90), where the possibility that KG ended in 358/9 seems more likely. In this essay Burgess explores the common source between the Latin historians of the late fourth century for the years 358-378 AD, through a methodical and deep analysis of the evidence and convincing parallels of wordings. The starting point is again Jerome's Chronicle and his use of Eutropius. His conclusions this time partially conflict with the ones in the previous contribution, but this often happens when research on complex topics is done at such a high level, and the argument of the article is strong. More difficult for the reviewer to accept is Burgess' cursory dismissal of the question of the Nicomachus Flavianus' Annales and his skepticism around the "small cottage industry that has grown up around Flavianus' history, perpetuated by a few European scholars" (168-169 with n. 11-12; cf. also 3 at the end of the volume). One short essay (nr. VIII) on a possible mistake in the tradition concerning Eutropius as magister memoriae concludes the section on historiography.

What follows are the historical contributions. In article nr. IX are discussed the location and the dynamic of Constantine's death starting from the analysis of Eusebius' tradition and following the Quellenforschung, while in the essay nr. X, Burgess studies in detail the conspiracy that followed that event, i.e. the "Great Massacre" of 337, in which a branch of Constantine's family was exterminated. In his attempt to reconstruct the events of the summer of that year, Burgess offers a very accurate study of the pagan and Christian literature, adding as support the important evidence of coins, papyri, and inscriptions. The chronological analysis leads to a better understanding of Constantius II's conspiratorial intentions. To Constantius II is also connected article nr. XI, concerning the date and meaning of a well-known translation of relics to Constantinople, which took place under his reign.

With essay nr. XII Burgess moves to the middle of fifth century to discuss the accession of Emperor Marcian as described in at least three traditions, also exploring the views of the monophysite version of the event. Burgess goes here through a huge amount of sources and historical accounts starting with Theodosius IIs' death, and investigates the role of Pulcheria in that circumstance by highlighting the ways religious tendencies may have led to a distortion of events.

Moving to the West, essay nr. XIII deals with the Western Emperor Avitus' third year of Empire and his death. He dismisses the contributions of R. Mathisen (a specialist of Late Antique Gaul) on this subject as lacking in foundation, and then provides his own analysis of the Chronica Gallica in parallel with other evidence (345; further discussion in a note at the end of the volume, 5-7).

A reconstruction of Quinquennial Vota and Imperial Consulship for the period 337-511 is the subject of essay nr. XIV. Numismatics, one of the most important sources that celebrate these events, benefits from an accurate examination of the fasti. The tendency of the Emperors to hold consulships in Quinquennial celebrations became the norm, and the related donative are regular until the beginning of the sixth century, when they suddenly stopped.

Article nr. XV, the last piece of Burgess' collection, deals with the consuls of the year 161 AD by investigating a largely overlooked quotation from the Historia Augusta (Vita Helii) and explaining it on the basis of the evidence of Chronicles, fasti and consularia. The hypothesis of a possible edition of the fasti in that same year, 161, to celebrate the consulship of M. Aurelius and L. Verus (not yet Emperors) as the two Emperors Antonini is striking and seems to better explain as continuations some lists of fasti consulares starting with this year (cf. 284-6).

Burgess' book is a very impressive bridge into the past through Chronicles and abridgments from the third to the fifth century, with copious references to the Byzantine literature and coins. The collection is a clear demonstration of how an accurate work of reconstruction of chronology results in a better understanding not only of historical accounts, but also of the sources used by the chronographers, upon which modern historians rely. Burgess' analysis in fact makes clear that Chronicles are important instruments for the understanding of Quellenforschung. Their concise wording hides fragments of historical works, some of them lost (e.g. KG). As a final result, this collection fully justifies Burgess' ambitious undertaking of a new systematic study of the ancient Chronicles in more volumes, which we are eagerly looking forward to have in our shelves.