R. Zelnick-Abramowitz: Not Wholly Free. The Concept of Manumission and the Status of Manumitted Slaves in the Ancient Greek World, Leiden / Boston: Brill 2005 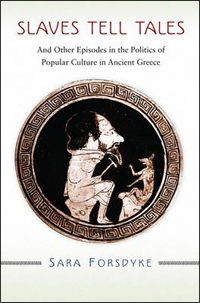 Ever since the 50's medieval and early modern historians have engaged in a concerted effort to study the culture and history of the subaltern classes, instead of focusing exclusively on the elites that have generated most of our evidence and remain at the centre of traditional historical accounts. Ancient historians have lagged far behind in this respect; in this interesting book Forsdyke invites us to explore the popular culture of ancient Greece through an analysis which is informed by comparative history and the work of important modern historians, such as E.P. Thompson, Eugene Genovese and Mikhail Bakhtin. As the very title suggests, the book brings together chapters examining different aspects of popular culture in ancient Greece, many of which have been previously published independently.

Chapter 1 (3-33) provides an introductory exploration of this agenda, by presenting the comparative approach espoused by the author and delineating similarities and differences between ancient Greece and early modern Europe, antebellum US South and contemporary Southeast Asia, which provide the comparative background of the book. Particularly commendable here and in the rest of the book is the author's argument that the legal distinctions between slaves and free, while important in certain contexts, had little value in other aspects of popular culture.

The long chapter 2 (37-89) is a detailed interpretation of the story of the Chian slave Drimakos, the leader of a band of fugitive slaves, who exercised authority in the countryside of Chios before being killed and given a heroic cult attended by both Chian masters and their slaves. Forsdyke interprets the story as a fictive narrative that combines subaltern visions of the world turned upside down with a public transcript that justifies the slave system, and sees the cult as a means of accommodating both tensions. This interpretation is based on an extensive use of comparative evidence on subaltern worldviews and a discussion of ancient fable as an expression of slave perspectives. According to Forsdyke slave story-telling played a crucial role in negotiating the emergence of a cult that emphasised both the need for slaves to serve loyally and for masters to treat slaves humanely.

Chapter 3 (90-113) employs Bakhtin's concept of folk humour in order to reinterpret Herodotus' stories concerning the strange attempts of Cleisthenes, the archaic tyrant of Sicyon, to abolish Argive influence on his city by diminishing the cult of Adrastus and changing the civic tribes' names. Forsdyke argues that Herodotus' account preserves a popular narrative which reinterprets sixth-century events in a humorous attempt to ridicule the tyrant.

Chapter 4 (117-143) uses comparative evidence from early modern Europe in order to interpret some stories in Plutarch on archaic Megara as evidence of the employment of festive revelry by poor Megarians as a means of expressing their social discontent and force the rich to attend to their needs. Chapter 5 (144-170) explores the evidence for street theatre and popular justice in ancient Greece, by focusing on three practices: acts of public shaming, in particular those related to adulterers and adulteresses, the razing of houses and the stoning of people seen as public enemies. Forsdyke argues that these forms of popular justice complemented official justice and were means through which the masses chastised members of the elite who were seen as acting against the common good. In both chapters 4 and 5 Forsdyke stresses that the mass groups involved in festive revelry and street theatre must have included not only poor citizens, but also women and slaves. In the short conclusion (173-178), the author recapitulates the arguments presented throughout the book and in individual chapters.

As with all historical reconstructions, the interpretation of the particular episodes discussed by Forsdyke will be a matter of scholarly debate; more important though is the wider argument that Forsdyke eloquently presents in regards to the value of comparative history and the significance of studying Greek popular culture. Forsdyke does us a great service by presenting the work and approaches of historians like Thompson, Davies and the Subaltern Studies group, which are generally unknown to most ancient historians. Equally, the call for a serious study of popular culture in ancient Greece is timely and important; the exploration of an arena of action and thought next to and beyond the formal institutions of the community is certainly a step in the right direction. Forsdyke's emphasis that subaltern groups are not mere objects of exploitation in a historical process created by the elites, but historical subjects with their own agency and means of expression, is undoubtedly salutary. But this raises important questions both about the ways of employing comparative evidence and about the meaning of popular culture and subaltern agency.

In order to delineate popular culture, we need to decide on its opposite, presumably elite culture. While most complex societies have social divisions, not all elites develop a separate elite culture, and accordingly the distinction between elite and popular culture does not apply to all societies; even where it does, the specific configurations are crucial. Early modern Europe had state/monarchical apparatuses and courts, the independent institution of the Church, and an aristocracy distinguished by clear legal and customary rules. Although nothing similar existed in ancient Greece, this is not to say that there was no distinction between elite and popular culture. But we need to discuss the what and the when: can we talk of elite and popular culture in Dark Age Greece? If not, how and when does such a distinction emerge?

As for what, take for example the punishment of adulterers discussed in chapter 5. Presumably elite members who caught adulterers in their house punished them with the same forms of public shaming: did elite members use popular justice, in which case what is the point of using the term 'popular', or would it make more sense to talk of 'informal' or 'extra-legal' rather than 'popular' justice, alongside 'formal'/'institutional' justice? And we need to think harder on the difference between comparing 'popular'/'elite' and 'informal'/'formal' in the specific context of ancient Greece: while the two sets might be homologous in early modern Europe, things might have been different in ancient Greece.

This makes it essential to reconstruct the popular communities, before examining what forms of popular culture they created and employed; in some ways, Forsdyke's book puts the cart in front of the horse. We need to explore the popular communities created by working, living, worshipping and acting together, if we are to understand the forms and uses of popular culture. And in that respect we cannot assume trans-historic equations. Forsdyke is surely right when she insists that in all societies the rich oppress the poor and the poor fight back (142-143, 178); but the specific historical configurations of this abstract truth are crucial. In the New World we know of slave communities with their slave culture, which included slave cults, like Santeria and Voodoo, and slave material culture (pottery, pipes). And this slave culture and community were crucial, because they created a black nation out of a disparate mass of slaves from the most diverse ethnicities, cultures and languages. Our sources for Greece are not as good, but we can be certain that there was no such thing as slave cults or slave material culture. This is a crucial difference that makes direct application of comparative evidence from either early modern Europe (where slavery did not exist), or the antebellum US (where there was a distinct slave community and culture) problematic in the case of ancient Greece (where there was slavery, but not a distinct slave culture). We cannot simply assume the existence of a slave community in ancient Greece; this does not mean that ancient slaves did not exercise agency, but it means that we have to explore what alternative forms and what other kinds of communities their agency created. While comparative history is important for making us alert to significant questions concerning popular culture, we need to construct an adequate methodology for studying the particular case that is ancient Greece. We are still a long way from achieving this aim; but this book is certainly a welcome opening salvo for exploring the culture of subaltern groups in antiquity.