Michael Scott: Space and Society in the Greek and Roman Worlds 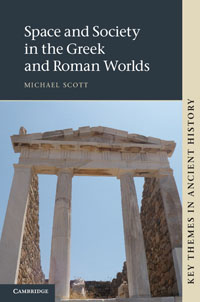 The current volume by Michael Scott, part of the well-known Cambridge series Key Themes in Ancient History, provides an introduction to the relationship between space and society in the ancient world. The book is well-written and has excellent maps and images that make following the argument an enjoyable experience; it also includes very useful bibliographical essays that are fully up to date. The book is well-designed, covering both a variety of physical spaces (civil, sacred and funerary), as well as examining a range of conceptual spaces and how they function. Particularly laudable is the geographical spread of the topics, which ranges across the Mediterranean and manages to avoid the Athenocentrism and Romanocentrism which often dominate similar works; the same also applies to chronological coverage, that ranges from the archaic period to the early imperial period. Unfortunately, though, these important advantages are diminished in varying extents by the problems and limits of the analytical frameworks that Scott employs in order to explore the role of space, as the discussion below will show.

The Introduction (1-13) provides a very useful summary of recent approaches to space in archaeology, history and literary studies and introduces the main themes of the volume.

Chapter 1 (14-44) examines how space located and articulated a community through a case-study of the development of the agora of Cyrene. The chapter consists of a detailed discussion of the development of the architecture and civic and religious structures in the Cyrenean agora from the creation of the apoikia in the seventh century to the abandonment of the civic space in the course of the fourth century CE. Scott pays particular attention to the successive reconstructions and modifications of structures, the focusing of building in different periods on different parts of the agora, the creation of meaning by the concentration of different kinds of buildings and monuments in different parts of the agora, and the importance of decisions to maintain or abolish buildings and substitute them with new structures. The chapter attempts to correlate the changing space of the agora to wider political, social and economic changes, but is betrayed by reliance to rather schematic interpretative polarities (e.g. the agro-pastoral deities Demeter, Dioscuri and Hestia vs. the aristocratic and monarchical Apollo and Zeus, or the democratic agora vs. the aristocratic sanctuary of Apollo).

Chapter 2 (45-76) turns to the international sanctuary of Delos, in order to explore the religious landscape of the island in its long-term history. Scott provides a detailed overview of the construction, renovation and decline of various sacred buildings and their use of space in the course of the long history of the island; the account is divided by the major political punctures of the archaic period, the period of Athenian supremacy, Delian independence and renewed Athenian control accompanied by the emergence of Delos as a cosmopolitan emporion. Scott makes various interesting points in the course of his discussion (the sacred politics of locating the temple of Hera away from the sanctuary of Apollo and Artemis, the importance of processional routes like the Lion terrace, the differential spatial focus of different actors in their investment in the sacred landscape); but one feels that the effort to describe every single building misses the opportunity to provide an in-depth analysis of the phenomena and processes involved. Phenomena like the competition for the control of space (Sarapieion A) or the use of space by the religious associations get short shrift, while important aspects like the employment of the Delian landscape (river) by the Egyptian cults go without any discussion.

Chapter 3 (77-109) examines the space of Roman road cemeteries, focusing on Ostia, Pompeii and Rome. Scott provides a useful description of their many cemeteries and their development through time. Among other issues, he argues that the significant rise of tombs for freedmen in the course of the first and second centuries CE reflects processes of social competition with older elites and the rise of the freedmen as a social group; but his interpretation of cemetery history and its social significance is unfortunately misleading. Various studies have established that in many communities of late republican and imperial Italy cemeteries never, or only briefly, became arenas of social display for the elite and the largest part of the free lower classes; this is the reason that tombs of slaves and, overwhelmingly, freedmen dominate many Italian cemeteries. The reasons for this phenomenon are complex and debatable; but interpreting the significant increase in freedmen tombs in Ostia and Pompeii as evidence for a social revolution, as Scott does, is deeply misleading, as studies by Henrik Mouritsen and others have shown. Understanding Roman funerary space requires analysis of Roman attitudes to cemeteries, commemoration, status and community construction; neither commonsensical approaches and mere description, nor the importation of assumptions that would apply in the Greek world can do the trick of interpretation.

Chapters 4 and 5 move from the examination of particular spaces to the exploration of the spatial relationships between places. Chapter 4 (110-36) is devoted to an account of the relationship between the metropolis of Corinth and its 'colony' Syracuse in terms of their proximity or distance. Scott explores the ramifications of this relationship across time from the eighth century to the late Hellenistic period using the full range of literary, epigraphic and archaeological sources. The discussion makes many valid points, noting e.g. the variable extent to which the material culture of Syracuse relates to that of Corinth or to that of other Greek poleis like Athens or other 'colonies' like Megara Hyblaea. It is rather unfortunate that discussion of the relationship is one-sided, looking primarily at how Syracuse related to Corinth and hardly vice-versa. Furthermore, given that Greek poleis conceived of themselves as communities of citizens rather than territorial states, and that the link between colony and mother city tended to focus on kinship, it is not very clear what a spatial analysis offers beyond the rather vague terms of proximity and distance (e.g. Athens actively sought to minimise the distance between itself and Dionysius: 129); it also becomes rather difficult to understand the meaning of phrases like 'Thucydides' narrative portrays how both Syracuse and Athens abandon the notion of a wider Greek space and identity' (126).

Chapter 5 (137-58), on the other hand, is an excellent discussion of the construction of conceptual space in a literary text. The chapter takes as its case-study the variety of ways in which the place of Greece functions in the oecumene of Strabo's Geography. Scott explores the textual centrality of Greece in the literary tradition to which Strabo belongs; he analyses how Greece constitutes a spatial network constructed through 'colonies', myths and history that shapes the description of both western and eastern Mediterranean and is inscribed in their landscapes; he examines how Greece provides a spatial microcosm for observing processes of the development and collapse of power structures and civilisations. Particularly interesting is Scott's analysis of how the space of Homeric Greece provides a layer of the past that defines the shape of things in Strabo's time, as well as how the present space of Greece reflects on the successes and failures of Roman policy.

The conclusion (159-69) provides a synopsis of some common themes that appear in the various chapters, as well as an overview of continuities and changes in the attitudes to space in the classical, Hellenistic and Roman periods.

As the above description shows, the book is a mixed success. While Scott does a good job of describing particular political, sacred and funerary landscapes in chapters 1-3, the limits of the analytical frameworks he uses often vitiate what could have been a very interesting discussion. These problems as regards the analytical framework become particularly acute in chapter 4; but chapter 5, where a very incisive analysis is employed in order to illuminate the role of space in a literary text, shows how successful this book could have been, if more effort had been devoted to think it through carefully. Nevertheless, the reader will certainly benefit from an introductory book which is well-written, covers a variety of stimulating topics, and raises a large number of questions, even if it does not always succeed in its answers.