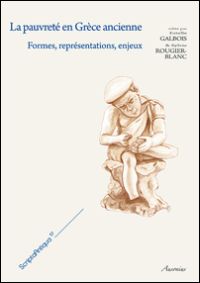 Compared to late antiquity and even the Roman world, the study of poverty in the Greek world has been particularly limited. This edited volume brings together a series of papers that provide stimulating new avenues of enquiry. The book features an extensive introduction by the editors, which sets the context of past scholarship and current research agendas (13-23), accompanied by a chapter by N. Jouenne, which examines the methodological problems faced by social scientists studying contemporary poverty (25-33). The main body of the volume is divided in three sections (words, practices, images), each of which commences with an illuminating introduction by the editors.

The first section is devoted to the vocabulary of poverty. S. Coin-Longeray examines the two main Greek words for poor, pênês (poor) and ptôchos (beggar), in the corpus of Greek poetry from Homer to Aristophanes (45-65). She argues that while both terms share a range of common elements in their representation in Greek poetry (lack of food and clothes, disdain, distrust), the poor is represented as part of society, while the beggar is seen as a marginal and outcast figure. Nevertheless, while the image of the poor is relatively rare in most of Greek poetry, the image of the vagabond, starting from Homer's sketch of Odysseus, plays a more prominent role. She also argues that the image of the poor is more prominent in Theognis, due to his personal condition, and in Aristophanes and Euripides due to the social crisis of the Peloponnesian War: but this is an explanation that assumes a direct correspondence between reality and literature and which is quite debatable. M.-J. Werlings asks whether a social group identified as 'the poor' can be found in archaic Greek poetry (67-81). She plausibly argues that while Homer, Hesiod and Theognis explore the consequences of poverty on the unfortunate individual, it is only with Solon that we first encounter a collective group described as penichroi.

The second, and probably the most interesting section, explores the extent to which it is possible to identify in the literary and material record practices specifically associated with the poor. The general tenor of all four papers is that such an identification is either impossible, given the nature of the evidence, or misleading, since the practices were employed by various sections of society. L. Baumer examines whether small rural sanctuaries were utilised by the poor (97-104). Literary sources and modern scholarship can give the impression that rural sanctuaries were maintained by the simple and poor inhabitants of the countryside; nevertheless, an examination of a number of rural sanctuaries from the Athenian countryside shows that such an assumption is not verified by the archaeological evidence. The image of poverty and simplicity in rural sanctuaries is an urban idealisation of the countryside, rather than a reflection of rural reality.

S. Rougier-Blanc offers an impressive exploration of the space of poverty in archaic and classical Greece (105-35). The two main questions she asks concern the extent to which poverty is associated with homelessness in ancient Greece, and the extent to which we can identify the houses of the poor in the written and material record. As she shows, Greek sources do not associate poverty with homelessness, but rather with vagabondage. This leads her to an exploration of the various spaces that the extremely poor might have occupied in ancient Greece: from the courts of private houses to streets and public spaces like sanctuaries and baths. Given the nature of our sources, it is not surprising that we know so little about the practice of squatting in Greece. On the other hand, the author correctly argues that the identification of the houses of the poor in the literary and material record is quite problematic. Modest houses are not necessarily the house of poor people, and there seems to be rather limited evidence for zoning on the basis of wealth; the absence of archaeological attestation of synoikiai is a major problem in our understanding of the housing conditions of the poor. Ultimately, Rougier-Blanc concludes that the evidence points towards a relative integration of the poor in terms of housing in archaic and classical Greece.

The short chapter by A. Południkiewicz examines the repair and reuse of ceramic vessels based on evidence from Egyptian sites (140-4). She argues that repair or reuse can be attributed to lack of easy access to potteries for replacement, lack of resources to acquire a new vessel, or the sentimental value of certain vessels for their users; unfortunately, the nature of the evidence makes it impossible to decide the extent to which poverty can explain the choice of users. Finally, J.-M. Roubineau offers a very stimulating exploration of the extent to which the practice of child abandonment can be associated with poverty (145-64). His detailed and chronologically wide-ranging discussion of the evidence shows that child abandonment was a rational economic calculation of the child's impact on the family equilibrium and inheritance strategies: in this respect it was a practice that could be employed by all sections of society.

The third section explores the images of the poor in literature and the visual arts. P. Jacquet-Rimassa examines the extent to which poverty makes its presence in the iconographic repertoire of Athenian pottery (179-88). As he argues, Athenian potters tended to focus on the relationship between dominants and dominated, and used various iconographic features to indicate those dominated (size, short hair, clothing, foreign facial features). It is only through the frame of mythology that elements associated with poverty enter the iconographic repertoire of Athenian vase-painting: the two cases discussed by the author concern the depiction of the mendicant Odysseus and the representation of Geras (Old Age). E. Galbois examines the representation of poor people in the Hellenistic terracottas of Egypt and Asia Minor (189-210). While some terracottas depict easily-identifiable working people, it is more common to find depictions of features like old age, thinness, illness, ugliness and cheap clothes which are closely associated with poverty: the grotesque and apotropaic character of many of these terracottas raise interesting questions of the extent to which they can be seen as representations of poverty.

C. Orfanos explores the political and ideological context of Aristophanes' representation of poverty in Wealth (213-22). He discusses the nexus between three themes: that of unjust wealth, the envy (phthonos) of wealth as the human equivalent of divine nemesis, and the idea that poverty is beneficial for poor people. Orfanos situates the play's arguments in the context of 388 BC, in which, according to his interpretation, the defeat of fifth-century radical democracy and its redistributive policies has led to political resignation among the masses. He argues that the purpose of Aristophanes' eulogy of poverty is to convince a theatrical audience overwhelmingly composed of poor citizens that daydreaming about wealth is the only possibility in a world of political inaction. The final chapter by C. Pébarthe examines the ways in which the images of penia and poros are employed by Plato and Xenophon in order to portray Socrates and characterise the task of philosophy (223-36).

The volume is undoubtedly a welcome contribution to the study of Greek poverty; particularly commendable and highly stimulating is the serious attention given to the visual and material evidence, which is often missing from similar discussions. Among many points that one could raise, I will focus on two. The first is the tendency by many contributors in the volume to provide short-termist and straightforward explanations from the contemporary historical developments for the changes in the representation of poverty in the literary and material evidence. This does not usually sound convincing, and requires a methodological discussion of how changes in historical reality of poverty affect changes in its literary and material representation. The second concerns the fact that many of the chapters come up with negative findings as regards the existence of a representation of the poor or of practices of the poor. Given these negative conclusions, it might prove useful to start future discussion not from the attempt to identify poverty, but from the conceptual focus of the Greek term penia: the need to work to make a living.