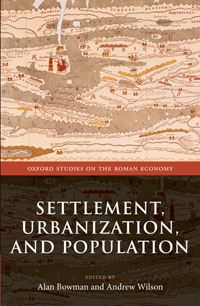 This volume contains ten chapters at the forefront of historical research - ten cutting-edge, methodologically sophisticated papers adopting a variety of approaches to the issues of demography, settlement patterns and the rate of urbanization in the Mediterranean basin from the Greek archaic to the late Roman periods. The volume is in fact the second in a planned series of five stemming from the Oxford Program 'The Economy of the Roman Empire: Integration, Growth and Decline'. Indeed, readers would benefit from reading the introductory chapter of the first volume of the series, 'Quantifying the Roman Economy' (2009), where the general editors, Bowman and Wilson, lay out methods, sources and approaches to the study of the Roman economy. In the volume under review the ongoing debate about methods and approaches is assumed rather than openly discussed. Moreover, the reader will find it helpful to have read and digested two relevant chapters of the first volume of the series, namely E. Fentress' 'Peopling the Countryside: Roman Demography in the Albegna Valley and Jerba' and E. Lo Cascio's 'Urbanization as a Proxy of Demographic and Economic Growth', which clearly serve as a benchmark for most of the contributions in the volume.

If the purpose of the series were to create an intellectual forum where concepts and theories about Roman economy are debated and tested, it seems to have so far succeeded fully and brilliantly. Unfortunately, the timing of the publication has not allowed the contributors to take into full account some recent important works on topics perhaps tangential but certainly relevant to those discussed in the volume, such as Launaro's 'Peasants and Slaves' (Cambridge 2011).

Despite the diversity of approaches and conclusions, all contributors share the belief that archaeological data and evidence - broadly taken, from scattered pottery sherds to the physical and material layout of cities - can indeed be used in quantitative analysis if properly interpreted and arranged in time-series. Another important common ground is the idea that classical civilization is quintessentially urban in character and that 'Rome was a world of cities' (Morley, 158, commented upon by Bowman and Wilson, Introduction, 5). The urban phenomenon therefore lies at the center of the volume and, even if tackled from a variety of perspectives, the question about the sustainability of a pre-industrial economic system where cities played such a relevant economic and ideological role is at the core of each chapter; hence the attempts to quantify the urbanization rate in various regions of the Empire (Bowman on Egypt, Wilson Empire-wide), or to understand the logic of city distribution and city sizes in some areas (Marzano on Britain and the Iberian Peninsula, Hanson on Asia Minor, Keay and Earl on Baetica). Even in the chapters whose focus lies in the interpretative quibbles of data from surveys (Witcher on techniques to extrapolate absolute figures for population densities in surveyed regions and the response of Mattingly, and Price on Crete and Attema and de Haas on the the territory of Antium) ultimately deal with the problem of the rate of urbanization and relative and absolute population figures necessary to sustain and support it. This is certainly the scholarly question, the thread that ties together the four chapters on field archaeology to the latter six on urbanization. More in detail, the ample chapter of Witcher, drawing on his previous work, seeks to conceptualize 'recovery rates' of sites as the fundamental variable in any attempts to move from dots in a map to a guesstimate of demographic trends and absolute figures. The point (69) about the importance of understanding 'past human behaviour' as well as 'post-depositional distortion' in order to assess recovery rates is forcibly made; the question of the assessing the reliability of recovery rates and therefore of having data from surveys dialogue with other documentary sources - as he does with regard to the debate of 'high and low count' for Italian population - is a step further into uncertainty. Mattingly's assertion about the fragile ground upon which any numbers based on survey data rest, and reminder to the reader that 'measuring the number of people is an exercise in uncertainties' (92) is a counterweight to Witcher's conclusions. Attema and de Haas, on the other hand, follow a bottom-up approach and guide the reader step by step from data to historical conclusions of general import and show the enormous potential for demographic studies offered by a regional analysis. Here again, the extrapolation of absolute figures is obtained after having forewarned the reader about the many uncertainties that make any conclusions tentative at best, not only because of visibility and recovery rates, but also because of uncertainties about the chronology of diagnostic pottery.

Marzano's and Hanson's papers are quite innovative in method and content; Marzano tests Zipf's rule of log-linear patterning of the sizes of cities within Iberia and Britain and concludes that, if cities are ranked according to the size of walled areas, the distribution pattern does not conform to Zipf's prediction and we should therefore postulate an historical reason accounting for the deviation from the rule. She concludes that 'system partitioning', i.e. not taking into consideration the whole geografic system, must be the main cause for the deviation of the normal rank-size curve. In other words, as Iberia and Britain are part of a larger Empire, the Zipf's rule would hold if we were to reckon Rome into the ranking. Rome as the center of the Empire is therefore integral part of the rank-size distribution of the cities in the provinces. This finding has obviously important consequences if one wants to assess the level of integration of the Roman Empire. Similar conclusions, adopting Marzano's line of thought, are given by Hanson with regard to rank-size distribution in Asia Minor. Here, though, the most interesting contribution concerns a new appraisal of plausible demographic sizes of various Anatolian cities, an understudied topic whose relevance for any assessment of the economic life of this vital province cannot be overstated.

Finally, Wilson's and Bowman's chapters bring the reader to the core of the historical question mentioned above. Wilson repeatedly - and with undue modesty - calls this an 'exercise'; it is actually an Empire-wide tour de force in search of a reliable order of magnitude for its rate of urbanization. The methodology is sound, and the conclusions will be compelling for any future attempts to cope with similar matters. One can obviously argue that this grand reconstruction of the urban phenomenon of the Roman Empire rests on too flimsy an evidentiary basis. In fact, any future competing guesstimate of that order of magnitude would ultimately rest on assumptions and working hypotheses as loosely rooted in firm evidence as those put forth by Wilson. This is therefore a real achievement and will certainly serve as a benchmark for any future research.

Bowman's assessment of the rate of Egyptian urbanization is another remarkable piece of scholarship. Here we cope with a world with some documentary written evidence and ancient records and very little or no archaeological data, precisely the reverse of what one is forced to work with in the rest of the Mediterranean. Better quality data, however, are made even more appealing as Bowman frames the debate about Egyptian urban performance in the wider context of the Mediterranean basin and takes into account a longer time span, from the Ptolemies to Late Antiquity. A reader unfamiliar with debates about ancient demography and urbanization should start reading from this chapter and then move to more uncertain territories. Indeed, if any criticism is to be made to the volume, it is that the Egyptian study-case is, as quite often happens, neglected by the other contributors, despite its heuristic potential for comparative approaches.

In conclusion, the value of the volume is superior to the summation of the individual contributions, as it brings the reader to the vivid landscape of recent debates and theoretical positions. It is flawlessly edited and lavishly illustrated with a rich series of maps, graphs, computer reconstructions, tables and pictures.