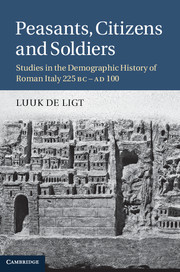 There is no doubt that this is an important book, one that every social and economic historian of pre-modern Europe should familiarize themselves with, whatever their period of specialization. All the more so for the ancient historian, to whom the book is explicitly addressed. The topic and historical question are familiar, even traditional, in the field of ancient history: how are we to make sense of the census figures of the Roman population reported by literary and epigraphic testimonia? How was the Roman census conducted and what was the population target that the Roman authorities recorded in the census? Should we account for a radical, albeit undocumented change in the population target between the censuses of 70-69 and 28 BCE in order to explain historically a more-than-fourfold leap in the overall number of recorded Roman citizens? De Ligt draws on a well established scholarly tradition, which has been polarized in recent times by two mutually exclusive and irreconcilable positions, dubbed the 'high' and 'low' count. The 'low count' - the theory according to which the census figures of the Augustan period must have included women and children born to Roman citizens, and therefore there weren't more than 4-6 million people in Italy on the eve of the first century BCE - ultimately derives from the work of Julius Beloch and Peter Brunt. They first collected the evidence and, from the figures interpreted as above, elicited a grand narrative for the last two centuries BCE of demographic decline of the free population supplemented by a steady increase in the numbers of the slave population. The 'high count' posits an overall citizen population tally at three to four times that of the 'low count' and accounts for a robust demographic growth of the free population over the last two centuries BCE. Depending on the demographic scenario envisaged by the two opposing theories, fundamental historical problems - such as the Gracchan reforms, mobilization rates and problems over the levy, the impact of slavery on the agrarian economy, migration of dispossessed peasants towards cities and rate of urbanization - would be interpreted in radically different ways and indeed this has been the case.

Demography and both relative and absolute demographic figures therefore lie at the core of the historical interpretation of the late republic. More broadly, if we reckon with absolute numbers in the range of six to eight million inhabitants in Italy during the Imperial period, we should conclude that late medieval and early modern Italy cannot serve as comparanda for the study of the Roman economy, simply because the demography and the agrarian economy of Italy in the second millennium was of a different order of magnitude, i.e. larger and superior. De Ligt touches on this latter, fundamental point in the last part of the book, although the bulk of his analysis is devoted to assessing which demographic scenario is more likely to be historically accurate. His analytical toolkit is quite traditional, and he discounts other methodological approaches, such as assessing the carrying capacity of a territory or measuring the impact of climate change, as useless or poor proxies. De Ligt, in fact, is at his best with the analysis of literary sources, and his philological, minute, attentive scrutiny of key texts, read and commented on several times by other scholars, yields unexpected new insights. It is not possible here to list the many points of detail in the literary sources for which de Ligt offers new readings (e.g. for the crucial passage of Polybius, Histories, 2.23-4, at pp. 40-78); I should emphasize that the author takes the literary testimonia seriously and nowhere is he less than deferential towards philological arguments. In fact, a fair combination of inductive and deductive reasoning shapes the structure of the book, with analysis of both the evidence and modern theories and models.

Briefly, despite the attitude of taking an apparently neutral stance in the debate, de Ligt examines the weak points of each theory and concludes that the least problematic interpretation, i.e. the one that does contribute to explain the largest number of ancient social phenomena, is the 'low count'. Ancient tallies, in other words, must have been closer to the 'low count', whereas the 'high count' should be discarded as a theory because, despite being elegantly formulated, it would sit uneasily with what we know of the demography of ancient populations, of ancient Italy and, comparatively, of Italy in the second millennium. De Ligt is nevertheless aware of the difficulties arising from the 'low count' and therefore offers a revised narrative of the social history of the last two centuries BCE, whereby he assumes that the free population grew, albeit slowly, over the period. According to the author the 'low count' offers enough room for demographic growth of the free population in the late republican period if the numbers are slightly modified. Moreover, fewer citizens in 28 BCE would allow for a steady demographic growth until the outburst of pandemic diseases in the 60s of the second century CE. The 'high count', on the contrary, implies demographic pressure over resources since the 'Gracchan reforms' and it proves heuristically inferior insofar as it does not allow for demographic variations over time. Here the argument is compelling and quite new and the 'high counters' should take this very serious criticism into account.

The demonstration of the superiority of a revised version of the 'low count' is nevertheless cumulative and there is no piece of evidence that can serve as smoking gun. A new approach, a veritable piece of original research, for which de Ligt builds a new database, is the use of data from walled areas of Italian cities. Here the challenge is twofold: he aims to prove the high-counters wrong as long as they deem that the urbanization rate of Italy would be implausibly high, if we reckon with an overall free population of only four to five million people; on the other hand, any comparison with the reliable demographic data for urban populations in northern Italy at the end of the 16th century would prove that the urban phenomenon in the same area in Roman times was of a much smaller order of magnitude. The picture that emerges is a Roman north Italy comparatively underpopulated and whose agrarian resources were largely underexploited. Beside the trustworthiness of such a reconstruction, which is open to dispute, it is worthwhile noting that this is the first attempt to apply the 'shotgun method' devised by Mogens Hansen for Classical Greece - i.e. to reconstruct population tallies from urban density - and the first systematic collection of quantitative data concerning the urban phenomenon in Roman Italy. If we compared the conclusions reached by Hansen and de Ligt, we would be surprised to see how the overall number of Greeks in the age of Alexander has been posited at twice the number of Roman citizens in the age of Augustus, which is frankly surprising if not puzzling, and perhaps a clue that something went wrong in either reconstruction, although we should be wary that the two target groups cannot be easily compared.

In conclusion, this book offers a thorough, sophisticated analysis of one of ancient history's most intractable problems, an 'academic battleground' where de Ligt takes sides, elegantly providing new ammunition to his field. The 'low count' should now be renamed as the Beloch - Brunt - de Ligt theory, inasmuch as the book here under review offers a more nuanced reading and addresses successfully some of the more evident weaknesses of the old version of the 'low count' theory. Of course, this does not amount to saying that the 'high count' front cannot offer a response to the book, or that it has been proven definitively wrong.