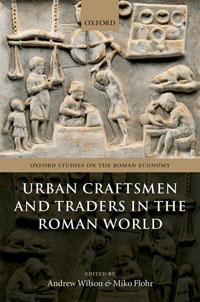 The new volume in the series of "Oxford Studies on the Roman Economy" is concerned with the subject of "Craftsmen and Traders in the Roman World". First, I want to point out that the book, which is edited by Miko Flohr and Andrew Wilson, maintains the high quality standard of the series. It includes sixteen contributions organized in four main chapters (1. Approaches; 2. Strategies; 3. People; 4. Space) and is preluded by an introduction (1-19) written by the two editors. It is not possible to review every paper in detail here.

The first chapter consisting of three papers deals with the history of sciences. There are of course many overviews, which are dealing with the so-called "Wissenschaftsgeschichte" of ancient economy [1], but the contributions in the first chapter are interesting because their descriptions are focused on the specialized topic of craftsmen and the connection between crafts and traders.

The second chapter presents four papers. Candace Rice observes the economic strategies in Roman maritime trade (97-114). This paper gives some smart remarks on sea routes, on merchants, and trading processes - most important are some thoughts on the spreading of negotiator-inscriptions. It deals with the subject of economic connections of craftsmen, traders and seafaring. The synergy of this paper with the new book of Pascal Warnking will have a huge impact on the recent research on maritime trade in the Roman Empire. [2]

Kai Ruffing gives a depiction of economic specialization of craftsmen which is mainly based on papyrological and epigraphic material (115-131). He analyzes the relation of specialization and the structure of markets. Furthermore he gives a lot of wise comments and insights on the subjects of location factors and productivity. He clearly shows that the observation of specialized production is a key for a better understanding of market systems in Roman antiquity.

Carol van Driel-Murray presents a paper on shoe manufacturing in the north-western provinces (132-152). She offers impressive implementations on leather production, technological developments and on consumerism.

Nicolas Monteix's paper deals with bakeries in Pompey (153-179). The Pompeian bakeries are used as a case study for the question of how to contextualize operational sequences in working and producing processes. The remarks on milling, baking, and the spatial organization offer many technical details and lead to a better understanding of the whole production process.

The third chapter starts with a paper by Christel Freu. She attends to the subject of apprenticeship in the Roman world (183-199) and demonstrates the leverage of the apprentice system on different sections of economic and social daily life. Of course it is hard to ask how many apprentices became autonomous workers or possessors of workshops. Some stayed as employees in the shops of their masters. So there were, as Freu shows, different levels and fates of apprentices.

The subject of women, trade and wool production in urban centres of Italy is presented by Lena Larsson Lovén (200-221). This paper, which is based on well interpreted epigraphic sources, gives remarks on the role of women in trade of luxury items and in production and trade of everyday goods. This leads to the depictions of the economic relevance of women's work in Roman antiquity. Larsson Lovén corrects older interpretations, which came to the result that women's activities in wool production were more or less only marginal.

Wim Broekaert delivers an interpretation of the use of freedman and agents in economic affairs (222-253). First Broekaert gives introductive remarks on the problems of status and dependency. Then he describes the model of agency usage, mainly the use of liberti, and reconstructs six highly interesting levels of agency, which can be determined by the epigraphic material: 1. Freedmen sell the merchandise they receive from their patron; 2. Freedmen produce or supply merchandise, which will be sold by their patron; 3. Freedmen and patron work closely together in every single business stage; 4. Freedmen are each separately responsible for all business stages with their patron merely providing infrastructure and finance; 5. Different business stages are entrusted to different freedmen with the patron providing merchandise or cooperating in one or more stages; 6. Different business stages are entrusted to different freedmen without the patron being personally engaged in business. Furthermore Broekaert gives some thoughts on the question of independent freedmen in Roman economy. It is not possible to summarize the whole paper which is full of smart ideas. All in all it is clear that future research in freedmen agency has a new basement.

Nicolas Tran gives a contribution to social organization of commerce and crafts in Roman Arles (254-277). He is dealing with an analysis of different social structures and top-down patterns. Interesting is his great description of the hierarchy of corpora and their work in economic affairs. In a second step he focuses on the social structures of a harbor city. The paper ends with a catalogue of 37 latin inscriptions from Arles, which are the basement for Tran's social-economic study.

Ilias Arnaoutoglou presents an interesting article on the professional associations in Hierapolis (278-298). Based on inscriptions the study deals with different questions; for example who founded associations or how were they structured. Arnaoutoglou tries to compare the evidence from Hierapolis with other cities like Saittai or Thyateira. She can demonstrate that local circumstances had important influence in (trans)forming professional association and that craftsmen were able to seize prominent places in urban society against resentments of elites.

The last chapter starts with a paper of Penelope Goodman, which deals with the question of clusters of Artisans in Roman cities (301-333). Where can clusters be located, how were they structured and connected, and which kind of abstractions for working processes are possible by the information of the archaeological data? Mainly Goodmann concentrates on Pompeii, Timegad, and Rome. She also uses comparative material of modern times, for example clusters of the jewellery industry of Birmingham from the eighteenth and twentieth centuries. The comparative perspective leads to a better understanding of ancient situations.

Kerstin Droß-Krüpe presents a paper based on epigraphic, papyrological and archaeological data, which deals with the question of spatial concentration and dispersal of Roman textile crafts (334-351). By observing all the evidence she can make clear that it was no typical strategy for textile craftsmen to concentrate their workshops in certain parts of a city. There was, as Droß-Krüpe emphasizes, no state order, which lead to concentrations of crafts in a city. At first sight, Rome seems to be an exception. Toponyms in the Tiber City could imply some clusters. But Droß-Krüpe demonstrates that the ancient evidence clearly offers not signs for closed clusters. Craftsmen are also recognizable in parts of the city beyond areas which are marked with toponyms.

Orsolya Láng's contribution is about industry and commerce in the city of Aquincum (352-376). After a short introduction into the history of the city this paper, mostly based on archaeological sources, deals with the awkward problem of identifying workshops. By use of comparative material from other settlements it is possible to identify some workshops and shops in Aquincum. Láng gives impressive insights into the history of Aqiuncum, mainly the so-called "building XXIX" in the north-eastern zone provides a lot of evidence for economic research.

The last contribution written by Jeroen Poblome thematizes the subject of potters in ancient Sagalassos (377-404). Poblome describes the natural and environmental setting, discusses the scale of production, focuses on the economy of raw clay material, and makes an analysis of production process and organization of productive working actions. Moreover, he gives insights into investments in pottery economy and observes the functions of collegia. Of course the reconstruction of pottery business is only fragmentary because of the characteristics of archaeological sources. Nevertheless, this paper draws an informative picture.

Altogether, the volume offers excellent contributions of social-economic history. The combination of all categories of ancient sources and the usage of different methods are very fruitful and highly worth reading. Also laudable are the high quality photos and graphics, which enable a profitable use of the book.