Michael J. Jarvis: In the Eye of All Trade 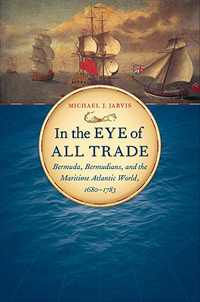 Studies of early modern Atlantic colonies have for years enlightened readers about the difficulties of early settlement and the struggle to establish profit producing industries. Books, such as Natalie Zacek's study on the English Leeward islands, have broken away from traditional approaches to the history of Island societies. Further studies, such as Simon D. Smith's work on the Lascelles family, illustrate changing economic and political circumstances in early modern America and how they affected the community and individual. Michael J. Jarvis, in his impressive investigation of Bermudian society, has gone above and beyond past studies of early settlements. His first monograph in a long line of publications on Bermuda in the Early Modern period has placed the island at both the centre of the Atlantic world and on the periphery of empire.

He begins his examination by contextualising the position of Bermuda (or the Somer Islands) within the Atlantic sphere. His introduction is fluid and enjoyable to read. The description of the shipping processes of the Atlantic presents a more tangible perspective, one that many studies of the Atlantic world lack. He gives a description of the settlement of Bermuda from the shipwreck of the Sea Venture (13) to the development of the maritime economy. Following this, the author presents a stimulating introduction to the dense networks of this isolated community (23). Jarvis' bold statement referring to Bermuda as "England's first multicultural society" (29) adds to the novelty of this study, making one wonder why a book such as this has not been written before. The comparison and relationship to other colonies in Virginia and the Chesapeake draws on the work of Russell R. Menard and Philip D. Morgan. This section of the book gives the reader the impression that while Bermuda faced similar problems of early settlement, it was altogether unique (33).

Jarvis has employed a truly interdisciplinary methodology. The book not only provides an economic account, but also a sociological, environmental, ecological and architectural description of the colony. The history of epidemics in maritime communities is certainly lacking investigation in the historiography. The discussion of "The Great Sickness" is brief but adds an important perspective to the history of the island and the susceptibility of maritime locations to travelling diseases such as Yellow Fever (83). Throughout the book, the movement from one trade to the next in search of lucrative staple markets is given comprehensive coverage. From tobacco to provisions to shipbuilding to salt, one gets the impression that Bermuda's economy was diverse and multi-layered. Jarvis' illustration of Bermuda's shipbuilding industry is inspired. The assessment of Bermuda's sloop success as being a result of "speed, cedar and slavery" (126) reminds the reader of the distinctiveness of this maritime community. One often does not associated shipbuilding as an industry of slavery but as Jarvis argues, skilled slave labour made Bermuda's sloops cheaper to construct and therefore gave the industry a competitive edge over popular North American shipbuilders (129).

Jarvis' study has revealed to his readers that economies in which slavery was employed could produce a complex range of commodities. The most interesting of his discussions regarding slavery in Bermuda is his piece on salt raking (206). In this section, he describes the division between the labour of white rakers and enslaved rakers and the size of the industry, which reached close to eight hundred workers in 1775 (207). Throughout his discussion of the islands development, the author illustrates the difficulty Bermudians faced in finding their place amongst the growing colonies of the American continent, a problem that seems inherently linked to the colony's inability to find one stable industry.

During the course of this book, the author enters into multiple discussions on the role of networks in Bermudian society. Community networks has become a topic of much debate over the past decades and a study of a maritime economy without an investigation of its networks would be incomplete. Jarvis tackles many of the important aspects related to community networks including resource pooling and density. For the early period Jarvis presents the networks of Bermuda as kinship based. He describes them as a network of interrelated families especially in the case of Bermuda's business community (141). However, his later chapter on "Maritime Migration, Trade and Atlantic Families" paints a picture of far reaching networks that stretched to St. Eustatius, Norfolk, Boston and beyond (318-374). For this he draws upon the work of Bernard Bailyn, David Armitage and Michael Braddick, historians well versed in Atlantic communities and migration. Within this chapter, Jarvis investigates Bermudian names and naming patterns, an approach not commonly taken in network studies (323). This approach gives yet another valuable method for studying early colonial settlements.

In the final chapters of the book, Jarvis investigates the later years in Bermuda's community. Most engaging is his analysis of Bermuda in the American Revolutionary War (375). Unlike studies of New York, Boston or Philadelphia; Bermuda's position in the war is uncertain. The island's implication in the war appears to be dominated by trading opportunities. Jarvis covers the island's participation in smuggling and wartime commerce earlier in the book (171) and this topic once again receives attention in this chapter. Recent scholarship of early modern wars and maritime economies has emphasized the advantages of war to certain trade communities. Jarvis continues this tradition by not only illustrating the many ways in which Bermudians suffered as a result of this war but also the various avenues of trade in which they found opportunity. One of his best examples is Bermuda's salt industry. Jarvis explains how Bermudian's realised the demand for salt in America was growing as their usual suppliers in Europe would have be unable to supply the needed quantities. Their response was to send a large export of salt to Virginia just in time for the slaughtering season in 1776 (398). Through this discussion, Jarvis illuminates Bermuda's position in the war and the entrepreneurial spirit of the business community.

In the brief epilogue, Jarvis describes the decline of Bermuda's maritime economy in the face of the rising economies of east-coast America. He describes Bermuda's history as "one of continuous adaptation to change and challenges". He gives the impression of Bermuda as the opaque colony, hidden from the administrators in London due to poorly kept imperial records (461). Jarvis' own use of primary sources is impressive, utilising collections in Bermuda, Great Britain and the United States. The journey this book has undertaken leaves the reader contemplating the possibilities of studying other locations in this manner. If every scholar of the Atlantic world took this approach, imagine what new wonders might be uncovered.