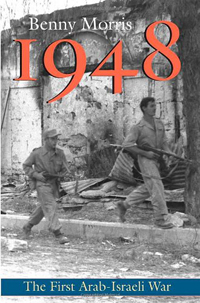 Benny Morris is professor at Israel's Ben-Gurion University. Over the past two decades he belonged to the New Historians. He has written books on the history of the Zionist-Arab conflict, Israel's Boarder Wars and the Birth of the Palestinian Refugee Problem.

Now, follows his seminal war history which is focused on 1948. Nine chapters deal with the background and the United Nations, stages of the civil war, the pan-Arab invasion, the first truce, the days after the second truce, the operations Yoav, Hiram and Horev until early 1949 and armistice agreements until mid-1949. Historical maps, photographs and a bibliography of the English and Hebrew literature make the book most helpful.

At the work's end, he offers conclusions of which I pick out a few to indicate trends of his approach. The war, he says, was the culmination of developments and a conflict that had begun in the 1880s when the first Zionist settlers landed on the shores of the Holy Land. Local Arabs either resented them or did not care all too much. Zionists on the other hand, found their enterprise legitimate and moral: the Jewish people were bent on saving itself by returning to the ancient land. With increasing numbers, Arabs decried this influx as aggressive invasion by Jewish colonialists, infidel aliens; it had to be resisted. Briefly in 1918, some Ottoman leaders welcomed the Jewish colonies in Palestine though Morris says the assault on the Jewish presence, Yishuv, was "a natural result" of the antagonism.

On the other side came the long Jewish rejection of the Prophet Muhammad to the fore. Morris cites a text by Egypt's Muslim Brotherhood according to which the Jews are the historic enemies of Muslims and carry the greatest hatred for the Muslim nation. From the Arab perspective, 1948 was a war of religion as much as a nationalist war over the area. Evidence shows that many, if not most, viewed this war essentially as a holy war. That jihadi impulse, amplified by surrounding Islamists, was central to mobilize Arabs. Leaders of the neighboring lands pursued their motives too: aborting that Jewish state.

Morris opines that Arabs were much stronger. The Jews, on the other hand, prepared for war. The Arabs had not (398), he claims. He should read Amin al-Husaini's memoirs of 1999. They tell another story. This Palestinian prepared for war in Palestine since 1944. He pre-posted weapons near Jericho and in the desert, built a militia and guided the Arab leaders. He got Hitler's consent to train and prepare Arab soldiers. Also those in special commandos in the rear of the front against civilians for the next war after the war. One commando landed near Jericho with Hasan Salama in 1944. Earlier, the Nazis made him a trainer for Arab commandos. Morris recounts his death. His son, Ali Salama, guided the 1972 terror at Munich Olympics and 1977 secret talks on terror with Vienna and Bonn in Austria. This was a true intergenerational chain: Hitler, al-Husaini, both fighters of World War I in Hasan Salama's age born about 1900; the son Ali Salama who was born in 1940.

In favor of Morris one has to admit that there are diverse special studies of the Arab and Palestinian side. But an Arab history of 1948, comparable to his work, is still missing. It takes time if we see the not so hospitable situation of Middle Eastern archives. Anyhow, just by including Amin al-Husaini's key contribution, the picture changes considerably.

The Palestinians did not lack government (399) for al-Husaini's Arab Higher Committee was the main body. What they missed was the coordination and the multitude of visions how best to achieve their goals. The grand mufti had killed or sidelined other contenders of renowned clans. He took center stage since mid-1946 in Cairo. As ex-Ottoman officer he had some military experience. Having obtained large funds and ties to money men, he fought diverse conflicts, especially with the three kings of Egypt, Iraq and Transjordan. It was al-Husaini's work when his Palestinian militias (16,000 men) performed moderately well, as Morris puts it adequately, and this between late November 1947 and March 1948.

Except of Jordan, the author observes that in May 1948 all four Arab armies despatched small expeditionary forces to Palestine. Indeed, they left behind large units to protect the regime or to counter rebellious minorities such as the Kurds in Iraq. However, the four Arab armies were far stronger than the Haganah formations. If not in manpower, Morris stresses, then in the equipment and firepower. The Jewish higher motivation held onto the counterattack. Then the Israelis gradually overtook the Arab armies. The war changed. At the end of all the battles, the Israelis outnumbered the Arab soldiers by almost two to one.

Once the Israelis weathered the initial onslaught, Morris argues, this war was in effect won. All that remained, he continues, was to see how much of Palestine they could also conquer or be allowed to hold on by the Great Powers. They in turn affected the outcome measurably. The Soviets allowed for arms deliveries. The Americans imposed an arms embargo starting in December 1947. The United Nations did the same until late May 1948. The British and French embargo, on the other side, struck most of the Arab armies.

Thus Morris concludes, the Arab states had to fight the war with what they had in hand (402): this was "a stock they had failed to build up adequately in the preceding years and that rapidly diminished as the hostilities progressed." It is debatable that among the Arab states only the Jordanians recruited and deployed foreign (British) military experts. Cairo had hired "Rommel-Germans" off the Suez canal zone. So did al-Husaini who asked also soldiers of the former Muslim troops in the army and SS to come. They did, as we know. How effective they were in the end is another matter. But experts worked with Arabs too.

Did the Great Powers fail to intervene until May 1948? Yes, says Morris. His idea (403) though is doubtful that following the American-Soviet consent to partition, Arab leaders "were constrained by the thought that they were defying the will of the international community and that, should the Yishuv face defeat and massacre, the Great Powers might well intervene on its behalf." Evidence shows it was not at all on their mind. Arabs would have taken it all. The Great Powers were still busy how to share German war spoils. They did not care about the Jewish question before. Why should they do it now? They flinched to allow 100,000 Jewish refugees into Palestine. However, this book offers an insightful and revealing account of 1948. One hopes for an "Arab Benny Morris" to forward a similar solid study.