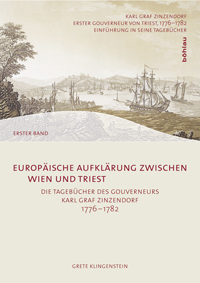 Count Karl von Zinzendorf, born in 1739, was a nephew of count Nikolaus Ludwig Zinzendorf, the founder of the Moravian Brethren (Herrnhuter). Karl followed his elder brother Ludwig back from the family's long exile in Saxony into Lower Austria and its noble Estate, the Roman Catholic faith and the service of the Vienna government. He kept a diary from his early years until he died in 1813, and during his adult life made a substantial entry every day, recording at least the weather, major events, where he was, what he did, whom he met and why, what was said, and what he read.

The diary's more than sixty volumes have always been held in the state archives of Vienna, where many historians and others have consulted them. They have been found valuable by historians of government, finance, Enlightenment, literature, music and theatre. Zinzendorf held government office almost uninterruptedly for fifty years, saw a good deal of the Austrian monarchs and knew all their higher officials. In the 1760s and 1770s Zinzendorf travelled exceptionally widely in Europe on fact-finding missions for the government of Maria Theresa. He met many of the great political and literary figures in nearly all European countries, and his accounts of these journeys in his diary are both thorough and illuminating. Some useful selections from the diary have been published, the most recent and scholarly, based on the work of Hans Wagner, being concerned with the diarist's early years down to 1763, including his move to Austria and his conversion to Roman Catholicism. [1] But the volumes under review are the first to publish a significant portion of the diary in full.

Up to a point the original is easy to use. It was written in fairly legible French, the diarist clearly took trouble to be accurate, and the entries followed a regular pattern. On the other hand, they are terse, they include passages in other languages, the handwriting is small and sometimes compressed, they use abbreviations not always easy to penetrate, and they are littered with names of persons and places and references to contemporary events, projects and writings, many of which are difficult to identify. Zinzendorf read very widely in English, French, German and Italian, not to mention Latin and Greek, and often referred to articles in periodicals and journals. For the diaries to yield their full value to scholars an elaborate editorial apparatus is needed that establishes the text, explains the welter of Zinzendorf's allusions and places him in his political, social and intellectual context.

The task of providing such an edition is finally being undertaken by a body of scholars under the leadership of Professor Grete Klingenstein, and these volumes are the first fruits of this plan. Since this is the first part to appear of a projected complete edition, its first volume contains weighty, original and fascinating essays on the state of Zinzendorf scholarship, on the earlier career of the diarist and on his intellectual position. The period of the diary covered, 1776-82, was unique in his life in that for most of it he was neither living in Vienna nor travelling abroad. Instead he was residing in one of the frontier outposts of the Austrian Monarchy, Trieste, as its governor. Hence, in the introduction a substantial and path-breaking chapter is devoted to the history of the port and its hinterland. But many sections of the introduction, such as those on his travels and on his life when in Vienna, range over a much longer period. An exhaustive bibliography concludes volume 1.

Volumes 2 and 3 reproduce the text of the diary for these six years. They demonstrate triumphantly the immense value of publishing the whole diary. It is hard to think of any source that illuminates so many aspects of such a long period. The interest is not confined to the Austrian Monarchy or even to Europe. He followed keenly the American struggle for independence and the voyages of Captain Cook. Although he was an official of the Vienna government, his outlook was cosmopolitan. He had converted to Catholicism but remained sympathetic to Protestantism. Though condemned to bachelorhood as a Knight of the Teutonic Order, he suffered 'erotic melancholy' and yearned to escape from his vows. The fact that one man could know, read and do so much is itself revealing. Sometimes his remarks are routine, but often his privileged position, his intelligence and his breadth of interest enable him to make a comment that tells us something to be found in no other source. For example, no other documents match his accounts of the workings of the Vienna government, especially his descriptions of his audiences with Maria Theresa and Joseph II.

Volume 4 provides a vast index identifying the people, places and works he mentioned. This is a truly prodigious achievement, giving details of the careers of ministers even when their names occur only once in the diary, pinpointing the issues of the periodicals which Zinzendorf mentions having read, explaining the significance of the places referred to, and so on. In order to understand properly the text of volumes 2 and 3, it is necessary to have volume 4 at hand. Indeed, almost any student of the period, whatever source he is reading, will find it worthwhile to have this index by him.

In addition to writing up his diary every day, the count compiled numerous official memoranda and collected government documents, most of which through his care are also preserved. They are mainly concerned with questions of taxation, trade, industry, mining and agriculture. Peter Dickson, in his fundamental studies of the Austrian Monarchy's economy, has made brilliant use of these materials, but has not trawled the diaries. In order to give a complete account of Zinzendorf's role it would be necessary to master both the diary and the Nachlass. But this could be accomplished only by a collective enterprise on a far larger scale even than these volumes have required.

For the moment it is a triumph that these four monumental volumes have appeared. Their publication will surely vindicate the vision of Professor Klingenstein and her collaborators in embarking on this vast project and should make it easier to obtain the substantial funding needed for the publication of the whole diary.