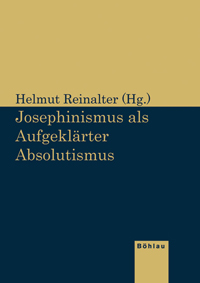 The first of these two collections on Josephism stems from a project based in Innsbruck. It consists of an introduction and eight articles, several of them very substantial. Helmut Reinalter's introduction (used, incongruously, in both collections) shows no interest in the origins of the term 'Josephinismus' and appears content to identify it with the domestic policies of Maria Theresa and Joseph II, with special reference to the latter. He defines it as "the Austrian variant of enlightened absolutism". But he also calls it "a social and cultural tendency, which created a movement for 'defensive modernisation' in the Habsburg Monarchy". Joseph's legacy, he declares, was the bureaucracy, which kept "the multinational empire together until its collapse" (16). 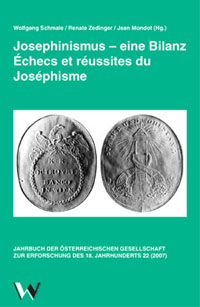 While Reinalter in his introduction sometimes specifies the Austrian Monarchy or Empire as his subject, here and in his thin essay on social reform it is apparent that he is seriously concerned only with the central lands, and most particularly with Austria. Following the editorial line, all the contributors - with one partial exception - concentrate on the central lands to the virtual exclusion of other provinces of the Monarchy. So, in an interesting piece on ecclesiastical policy (Rudolf Pranzl), there is nothing about Hungary or Belgium. Though Barbara Gant, writing on education, points out that the basic purpose of Maria Theresa's educational policy was "to preserve the Habsburg Monarchy as a whole, to unite it and strengthen it" (98), she does not deal with Hungary. She makes a powerful case that the government's policies in the Austrian lands, though they expanded primary schooling, were stultifying if not actually anti-intellectual, principally concerned to supervise and control the population. Bernhard Hackl's chapter on "economic policy between 1740 and 1792" contains valuable material but blandly views the customs barrier between Hungary and the central lands entirely from the latter's standpoint.

Gernot Kocher's dense and impressive study of legal reform considers neglected issues such as the publicisation and effectiveness of laws. But it concentrates almost entirely on carefully prepared compilations of laws rather than on laws as they were made, that is, often hurriedly and almost casually. The author, though clearly aware of Hungarian legislation, asserts that "for the Josephinian period the language of law was unquestionably German" (140). In fact no laws for Italy and Belgium were promulgated in German, and until after 1784 Hungarian laws were couched in Latin - which means that even in one small part of present-day Austria, the Burgenland, Latin was the language of law.

A particularly difficult task has been undertaken by Reinhold Knoll, who attempts to deal with "Kunst und Kultur im Josephinismus". He makes many interesting points, but is trying to bring too many disparate developments together. Incidentally, the Gothicising of the old Laxenburg castle did not begin under Joseph (299). On the other hand, Knoll seems to have missed a trick in not pointing out that the artists Löschenkohl and Füger were both Protestants (307-09). In general, toleration of Protestants, Orthodox and Jews receives little attention in this volume.

The final essay, by Matthias Rettenwander - of more than 100 pages - claims to describe the influence of Josephism after Joseph. What is said about the development of religious attitudes down to the Concordat of 1855 is certainly relevant. But much of the chapter is focussed less on Joseph and Josephism than on the œuvre of Fritz Valjavec. We are told next to nothing of the opinions expressed about Joseph and his regime in the numerous pamphlets, sermons and depictions that were published immediately after his death. No mention is made of the false 'Constantinople' letters of the emperor, published in 1790, and the role they played in the misleading picture of his views painted, for example, in Gross-Hoffinger's biography. No serious description is given of the background to the erection of his statue in 1807. The fate of Joseph's massive legislative heritage is not discussed. Neither is his contribution to the development of nationalism - both by repression, as of Belgians and Hungarians, and by liberation, as of Romanians.

With the extraordinary neglect in this collection of half of the lands that Joseph ruled - a neglect scarcely acknowledged, let alone justified - goes an over-reliance in many articles on German-language sources. I do not think a single work by a Hungarian author based in Hungary is anywhere cited, not even the brilliant German-language work by Antal Szántay [1], which supplies a ground-breaking comparison between Joseph's constitutional and administrative reforms in Hungary, Lombardy and Belgium.

The editor stresses that Josephism was a brand of enlightened absolutism, a practical method of government rather than a theoretical system. The more this is emphasised, the more evident it should become that its overriding purpose was to enable the emperor - as the only unifying element - to control all his disparate territories personally, precisely in order to homogenise them, to mobilise them and to make them work together, even (he hoped) redistributing their revenues so that rich areas assisted poor ones. The only contributor to address this issue is Irmgard Plattner in her essay on bureaucracy, where she stresses that Joseph carried Maria Theresa's policies on to a new plane, aiming at the ideal of "the unified state, subject to absolute rule and control" (67). As she says, "If [the definition of] Josephism is limited to politico-ecclesiastical issues," its implications will be very different from what they must be "if Josephism is the 'pursuit of state power'"(91).

The second collection reviewed here, on "the successes and failures of Josephism", comprises sixteen relatively short articles and is the product of a conference of French and Austrian students of the eighteenth century. Here the opportunity has been taken to treat Josephism more broadly.

To begin with, due homage is paid to the life's work of Renate Zedinger on Belgium and the Lorraine connexion. Among the articles are to be found two pieces on Hungary and one each on Belgium and the Bukovina. Claude Michaud is lively and instructive on the Hungarian nobility, and Jean Bérenger makes up for the neglect of religious toleration in the other collection - though he appears to think that Joseph rescinded his toleration edicts for the central lands, and it is certainly incorrect to say that in 1780 "all Christian confessions in Transylvania had been on a footing of equality" (204). Michel Galand on Belgium simply accepts Joseph's reforms in Belgium as "modernising" without addressing the critique of this position mounted long ago by Craeybeckx. A useful comparison with the Monarchy is provided by a paper on the ecclesiastical policies of archbishop Colloredo of Salzburg. (Alfred Weiss) Among more unfamiliar subjects, Sonia Horn gives a wide-ranging account of the origins of Joseph's medical-surgical academy, the Josephinum, and Christian Benedik demonstrates that the emperor's policy of homogenisation extended even to architectural drawings. After the weighty but constrained articles of the other collection these contributions are breaths of fresh air.

The most significant of all is that of Christoph Gnant, on "'Territorialer Etatismus' and Joseph's imperial policy". Taking the problem of diocesan boundaries and the jurisdiction they gave within Joseph's lands to bishops based outside them, Gnant shows that the emperor, in order to establish his control as ruler of the Monarchy, had to assail rights guaranteed by the imperial constitution - in theory, therefore, by himself as emperor. Gnant is surely right to maintain that this 'Etatismus' was Joseph's first aim. Here, though Gnant does not quite say so, domestic policy was being pursued at the expense of foreign policy. The formation of the Fürstenbund in 1785 owed much to the irritation aroused in the Empire by Joseph's policies towards the bishops, and the Fürstenbund was a foreign-policy triumph for Frederick the Great and Prussia.

If Josephism essentially aimed to strengthen the monarch's power over his territories, it had implications that no contributor to these volume risks drawing out. The pursuit of state power requires the maintenance of state sovereignty, and therefore a foreign policy, an army, and a readiness, in certain circumstances, to fight a war.