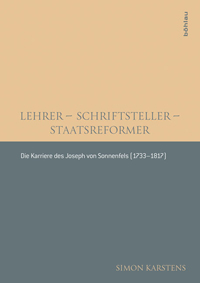 Joseph von Sonnenfels has such a large role in the established historiography of the Austrian Monarchy in the eighteenth and early nineteenth centuries that the writing of a book of 500-odd pages on his career as official, teacher, publicist and reformer may seem at first sight superfluous. But Simon Karstens makes a powerful case that such a book is needed, and has researched and written it so effectively that his contention is triumphantly vindicated.

His essential arguments for the project are, first, that most previously published work concentrates on only limited aspects of Sonnenfels' remarkably wide-ranging activity, for example on his promotion of a modernized German language as a literary and bureaucratic medium, or on his long stint of teaching cameralism at the University of Vienna, or on his massive contribution to legal reform, or on his involvement with freemasonry, or on his role as a censor of books and plays. As Karstens shows, these various aspects of Sonnenfels' contribution to the development of the Monarchy need to be brought together if his role is to be properly evaluated. Further, most previous studies were based on published rather than manuscript sources; and "the majority of previous accounts, even those of a biographical character, concentrate on the first half of Sonnenfels' career, that is, the reigns of Maria Theresa and Joseph II."(23) But Sonnenfels was unique in his period in that he remained active in public affairs into his eighties, far into the years of 'reaction' that followed the reforms of these rulers.

The author conceives his book not as "a narrative biography" but as "a study that shows Sonnenfels' career as the sum of his social interactions".(6) His work is securely founded on a broad knowledge of the existing secondary literature and on a substantial range of documents from eight Viennese archives and the Lower Austrian Landesarchiv. He tells us that the book is the product of four years work, and one can only marvel that he has achieved so much in such a short time.

He begins by describing Sonnenfels' Jewish origins and the circumstances that enabled him to escape and rise above them, incidentally correcting earlier accounts, and uses unpublished documents to explain how the young man obtained at such an early stage of his career his Chair at the University of Vienna, which was the foundation of his whole career. It is evident that, then and later, Kaunitz's support was crucial. Sonnenfels made an impression with his University lectures and then gradually won further recognition with his writings. He achieved wide fame with his well-publicised efforts to purify Austrian German, which were applauded in Germany, and through his criticisms of Austrian law, heard by so many generations of students in his lecture audiences at the University of Vienna. It was by a remarkable and exceptional combination of writing, lecturing, networking and administration that he made so great an impact on the life of his country. Although the government sometimes objected to his views and rebuked him, he was nonetheless rewarded with a succession of varied appointments, justified by the proof he gave in every post he held that he was an indefatigable and reliable administrator: he became Secretary of the newly-founded Akademie der bildenden Künste (1769), an official censor of books and theatre (1770), a member of the Studienhofkommission, an official of the Lower Austrian government and a member of successive commissions to reform and codify various areas of law. As is well known, his advocacy had much to do with the abolition of torture in 1776 and then with the abolition of capital punishment in 1787.

In 1782 he had joined the Vienna Freemasons' Lodge Zur wahren Eintracht, but by 1785 he was engaged in curbing its activities under pressure from Joseph II and under the aegis of prince Dietrichstein, the head of the family that had originally patronised him as a convert from Judaism.

What is especially remarkable, and has not been much noticed, is that, despite the fact that Joseph II eventually restricted his role in law reform to purifying the language of decrees, and despite Leopold II's in effect taking away his Chair, he re-emerged under Francis as, first, an unsuccessful critic of Pergen's secret police and then, despite that confrontation, as the man to whom the emperor had no hesitation in entrusting the completion of the new law code that he had called for and then worked on since the 1760s.

The range of Sonnenfels' governmental activities has not previously been so fully and clearly set out as in this book, and we learn also a good deal from it about some of his less obviously political concerns, for example about language and literature. That someone from such humble and despised origins could have such a career in the Austrian Monarchy is astonishing and unique.

While it is understandable that Karstens should exclude a strictly biographical approach, given how much space he needs for the aspects he wishes to cover, a full explanation and evaluation of Sonnenfels' career requires an estimate of his character and of the reactions of others to it. An aspect of great interest in itself, and in a society so devoted to music as Vienna's and the Monarchy's an aspect that may well have had wider significance, is Sonnenfels' involvement with music and musicians. It seems, for example, to be unknown why Beethoven dedicated a piano sonata to him. This is only one of many aspects of Sonnenfels' extraordinarily wide-ranging career that remain mysterious. But Karstens' beautifully clear, well-organised and well-researched book takes the subject to a new level, from which it should be relatively easy for other historians to make further advances.