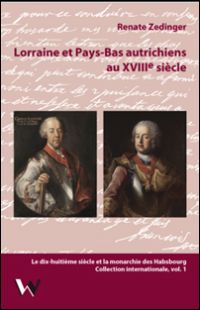 With monographs on the administration of the Austrian Netherlands, the marriage of Maria Theresa with Francis Stephen of Lorraine and a biography of the latter, Renate Zedinger has become a household name among those taking an interest in the eighteenth century. Perhaps less well known are the contributions that she has made over the years in publications and colloquia, using French, the lingua franca of the Enlightenment. These have now been gathered in a volume that was published on the occasion of the XIIIth International Congress for Eighteenth Century Studies (Graz, 2011).

The title of this volume aptly sets forth the two poles of the research activity of its author. On the one hand there is the Duchy of Lorraine. Its significance resides in how its ruling house acceded to the Habsburg inheritance, losing its ancestral domains in the process. On the other hand there is the officialdom of the Austrian Netherlands. The focus here lies largely, though not exclusively, with those officials that made their way to Vienna, be it as a result of promotion or out of the necessity of exile. In both fields of investigation, migration and the concomitant cultural encounters are important underlying themes.

As already indicated, the first part of the volume is devoted to the merger of the houses of Lorraine and Habsburg. Eight contributions explore the process and its impact on the retainers of the ducal house. They demonstrate that the union was not the chance outcome of marriage negotiations. The foundations for it had been laid two generations earlier. The advent of French military preponderance made Lorraine's traditional policy of carefully navigating between Paris and Vienna untenable. With his hereditary lands occupied by Louis XIV, Duke Charles V of Lorraine tied his fortunes to the Habsburg cause, married the Emperor's sister, commanded the imperial armies against the Ottomans and set up a court in exile in the Hofburg in Innsbruck. Under his son and successor, Duke Leopold, the dynasty regained its possessions, allowing him to establish a splendid court at Lunéville. The restoration, however, only lasted for a generation. In 1737 Leopold's successor Francis Stephen was forced to exchange the duchies of Lorraine and Bar for the grand duchy of Tuscany. Before leaving the lands of his ancestors, the duke took care to move his collections, archives and trusted collaborators first to Florence and subsequently to Vienna. For the remainder of his life and in spite of his imperial title, Francis Stephen was in essence the first modern prince consort. Yet the author argues convincingly that this did not make him a mere cipher. Francis Stephen not only carved out a personal sphere of action centred on his working palace in the Wallnerstrasse, but likewise ensured his descendants an unprecedented measure of wealth by the inspired management of his domains in Upper Hungary. In both these enterprises, the community of exiles from Lorraine played a conspicuous part.

The five contributions of the second part relate to the experiences of office holders from the Austrian Netherlands while posted or exiled in Vienna. They have a fair amount in common with the sole article in the third part, comparing the exile communities of Lorraine (after 1737) and of the Austrian Netherlands (after 1794) in the Habsburg Monarchy. One article presents an overview of the ministers that sat on the High Council for the Netherlands or served in the Department of the Netherlands that succeeded it. A further two deal with the amiable figure of Prince Charles-Joseph de Ligne and how he ended his days in the Austrian capital. The other contributions are largely based on the requests of emigrated officials preserved in the Finanz- und Hofkammerarchiv. As the author indicates in the final and comparative article, their fate differed markedly from that of the earlier migrants from Lorraine. Supported by a powerful patron in the person of Emperor Francis Stephen, the latter were the agents of an important transfer of knowledge in the cultural, scientific and economic fields. The former, on the contrary, had already lost their utility upon arrival. They quickly outstayed their welcome by proving an additional burden on the almost penniless imperial treasury. Not surprisingly, many of them chose to return home as soon as the political climate allowed for it.

Lorraine and the Austrian Netherlands were the two westernmost territories whose fate was either dynastically or politically connected to the Habsburg Monarchy. In its entirety, the volume opens a series of vistas on the role that these territories played in the developments of the monarchy in the course of the eighteenth century. As such it proffers a sound and timely warning against reducing the monarchy to a Central-European political and cultural entity. Given the justified broadness of this vision, it is somewhat regrettable that the treatment of the Austrian Netherlands seems to ignore the recent literature on the subject in Dutch. Yet this is not the most important point of critique. In putting together this volume, it was decided to publish every article as it stood. As a result, there is a lot of thematic overlap and the same or very similar points are made in different contributions. It is all the more to be regretted therefore, that the general conclusion does not really amend that situation.