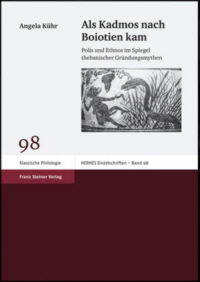 In recent years ethnicity has become one of the hot topics in Ancient History. Jonathan Hall opened the door for many Greek historians with two studies of Greek ethnic identity, while Greg Woolf's work also pointed the way, problematizing the ethnic identity of provincials, specifically the people of Gaul, in the Roman empire. [1] As a result, older notions of fixed, bounded ethnic groups have given way to the recognition that ethnic identity was negotiated, flexible, and situational. Since the works of these scholars appeared in 1997 and 1998, they have been joined by a slew of studies devoted to ethnicity. [2] Angela Kühr's contribution to this new wave consists of two parts: the first is an attempt to explain the specific relationship between an ethnos (the Boiotians) and the polis (Thebes) which came to dominate it. The second is her insistence that the topography of the city can be read as an expression of changing and competing claims to Theban and Boiotian identity.

After a short introductory chapter Kühr offers a chapter entitled 'Myth, Identity and Memory', laying out the theoretical approaches that inform her interpretations. The section of myth breaks no new ground and covers little that will not be familiar to most readers. The section on identity draws heavily on Assman but remains theoretical to a distressing degree. The section on memory covers ground possibly less familiar to English readers and discusses recent European work on the formation of memory situated in specific monuments and places, but the reader is still left waiting for the application of these approaches to the Boiotian material.

In chapter 3 Kühr offer a survey of the four major texts that describe Boiotia: the Catalogue of Ships in the Iliad, the Homeric Hymn to Apollo, Strabo's description in Book 9 and Book 9 of Pausanias. She finds geography and mythology reinforcing each other in the emergence of a culturally unified zone, with local and regional traditions, especially regarding the Minyans of Orchomenos, subsumed under the growing influence of Thebes. All of this is convincing, but it is regrettable that Kühr fails to deal with the 3rd century BC text of Herakleides Kritikos (BNJ 369a = FHG II 254-264): The people of Oropos called themselves Boiotian Athenians and the Plataians called themselves Athenian Boiotians. Surely such paradoxical ethnic labels deserve scrutiny in a chapter on the literary sources used to chart the evolution of Boiotian ethnicity?

Chapter 4 deals with Thebes under four headings: foundation, the house of the Labdakids, Herakles, and Myth and Space. Here Kühr treats the various, apparently contradictory accounts of Thebes' foundation. Kadmos emerges as a complex culture hero, his Phoenician origins arising from Greek traditions of exogeny, inflected by Thebes' antipathy to the growth of Delphi's power. In a further layer of complexity the story of Kadmos under instruction from Delphi following the cow to its resting spot is read as a reconciliation between Thebes and Delphi. Stories of Amphion and Zethos, the Seven against Thebes and Oidipous get a similar treatment, interpreted nicely by Kühr as evidence for a developing set of claims made by Thebes (though often twisted by Athenian dramatists). In the Theban setting these stories are primarily about Theban invincibility and proximity to the divine. The turning point in the myth cycles centred on Thebes comes with the emergence of Herakles as a Theban, Boiotian and panhellenic hero. Kühr relies heavily on the Aspis to argue for Herakles as the vehicle for advancing Theban claims to regional pre-eminence, especially in the face of Thessalian power in the 6th century, and she also makes a convincing case for seeing myth inscribed in the landscape of Thebes, especially in its springs, gates and water courses. Her notion that Thebes can be read as an Erinnerungslandschaft is surely correct and is the single most valuable contribution of the study. Even so, the reader is left uneasy on two counts. The first is that all of Kühr's topographical information seems to be based on Symeonoglou's 1985 study. [3] In vain one searches for any reference to any reports in the Archaiologikon Deltion, which would have brought the archaeological data up to at least the year 2000. More importantly, excavations recommenced on the Kadmeia in February of 2004 and were being reported at least in the Greek press by November of that year, well before the submission of Kühr's dissertation in Winter 2005/06 (http://www.kathimerini.gr/; see archived reports of 11/11/04). Although we still await responsible scholarly publication of this material, it surely would have been appropriate for a scholar basing so much of her study on the topography of Thebes to have recognized that this topography is currently in flux. (To be fair Kühr does cite the 2000 report of Aravantinos on the Mycenaean excavations in Thebes).

In chapter 5 Kühr tackles the question of the Boiotian ethnos. She begins with a discussion of the concept of ethnicity before turning her attention to various traditions concerning all the Boiotians as well as local traditions. Her treatment of the theories of Jonathan Hall and Anthony Smith reflect current thinking, and she asserts, as a general position, that Boiotian ethnogenesis was aggregative. Perhaps, but Kühr also discusses traditions concerning the Minyans of Orchomenos and finds here and elsewhere in Boiotia traces of local traditions that suggest a low level of resistance to Thebes that never entirely died out. As in the chapters on Thebes, literary sources predominate and receive the best analysis. Once again, the archaeology is less well handled. It is a real weakness of Kühr's study that she does not attempt to apply any geographic models to Boiotia beyond a broad centre-periphery approach that is so general as to lack any real heuristic value. In particular it is quite astonishing to find no reference to the two great German geographers of the Greek world, Alfred Philippson and Ernst Kirsten, whose work laid the foundations of such later studies as the Cambridge/Bradford Boiotian Survey, which is also uncited. Throughout the 1990's John Bintliff published a series of studies on the typology of settlements in the Greek countryside, basing most of his conclusions on data collected in Boiotia. [4] How Kühr can explore the relationship between the polis of Thebes and the Boiotian ethnos without even acknowledging the possibility that mythology might be the vehicle for negotiating the uneven power relations that Central Place Theory would locate in the survey record is a question for which I have no answer. The question, however, does lead one to feel that Kühr's study, for all its merits, represents a lost opportunity. Her summary, in chapter 6, plots the emergence of an ethnic identity almost as an ideal type, in a Platonic realm. The real Boiotians lived on a more prosaic plane.

[3] S. Symeonoglou: The topography of Thebes. From the Bronze Age to modern times, Princeton 1985.