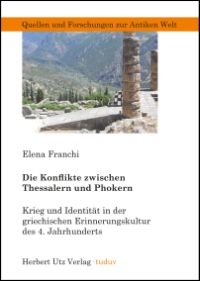 The Third Sacred War stands as an axial moment in the history of Greece in the 4th century BC. For ten years the panhellenic sanctuary of Apollo at Delphi was subject to Phokian domination, during which time a massive number of gold and silver statues were melted down. Before it, the Greeks were mired in the unending cycle of interstate wars that had afflicted them for hundreds of years. After it, Philip had established control over central Greece. Soon he and his son would effect the transformation of Greece from the centre of an Aegean system to the periphery of a world-system extending across central Asia. For these reasons serious historians of the fourth century have always had to grapple with the war and its consequences.

One particularly interesting avenue into the study of the Third Sacred War is an exploration of the relationship between the Third and Fourth Sacred Wars, on the one hand, and the First Sacred War, on the other. For some scholars, this relationship is simply the repetition of certain underlying conditions: Delphi was prestigious and wealthy, and therefore the urge on the part of its neighbours to control it was predictable and recurring. A more challenging thesis, argued by Noel Robertson forty years ago, is that traditions regarding the First Sacred War were entirely fabricated in the light of events in the Third Sacred War. Franchi's study sits firmly between these extremes of credulity and skepticism.

Drawing on Brelich's notion of initiation and ritual fighting, Franchi argues that the early conflict between Thessaly and Phokis can be seen in two lights: as an actual period of real opposition, but also as a sequence of events that generated a discursive strategy. At first glance this seems to be a fuzzy analytical approach, but Franchi does a fine job of assembling the evidence. It is remarkable how the same elements recur: hybris/asebeia/paranomia-aponoia-soteria. Relying on the ritual and initiation approach going back to Van Gennep, she demonstrates that these elements are deployed both in the various cycles of myths associated with Phokis - the Phlegyans and the Kragalidai in particular - as well as in the accounts of Philomelos, Onomarchos and the other Phokian tyrants who occupied and plundered Delphi before suffering the fate of temple desecrators. According to this very stimulating reading, patterns of thinking and story-telling first associated with the construction of social identities gradually shifted over into the associated field of ethnic identity: "So wird die Anthropopoiesis Ethnopoiesis." (167) It is an interesting argument, and one that offers a nicely recursive relationship between the occurrence of events and the historiography they generate.

At the same time, the study is not a complete success. Large sections of the study are exhaustive treatments of questions that could be argued much more concisely: the various traditions regarding the penestai in Thessaly, for example, or the history of social memory and ethnicity from Halbwachs to Siapkas (though, remarkably, no Benedict Anderson - if one is going to be exhaustive, one has to be truly exhaustive!) There is virtually no aspect of Archaic and Classical Phokian history or myth that is not given a complete status quaestionis, but such due diligence crowds out other, quite major areas of investigation that deserve attention. If, for example, one is going to use the word 'propaganda' to discuss the way the Phokians are portrayed, surely this raises the question of Delphi's role in shaping myth narratives in response to contemporary historical conditions. Christiane Sourvinou-Inwood explored this in her essay on the myths of the first temples at Delphi, and Franchi ought to have consulted this and given more thought to the role of Delphi in generating stories with ethnopoietic implications. Did Delphi cast the Phokians as essentially impious? Did the Phokians cathect to this reputation and embrace it? This is a line of inquiry that needs more exploration.

Two omissions also mar the study's completeness: the struggle for control of Olympia between the Elians and Pisatans prior to the Third Sacred War would seem to deserve a mention. The total omission of any discussion of Archaic Lokris seems especially odd. Recent excavations at Mitrou and elsewhere have shown the region was not exactly a backwater in the Iron Age. How did it come to come to play no discernable role in any of the events or traditions involving Phokis and Thessaly, particularly given that the region of Phokis most geographically prominent in these traditions was within spitting distance of Opous. A curious lacuna.

The question of how this cluster of topoi, connecting impiety, hybris, lawlessness and desperation, transitions from the setting of initiation to a broader, more developed stage of ethnic identity remains elusive. In an appendix to ch. 5, for example, after recounting the various traditions concerning the First Sacred War, Franchi offers an Addendum dealing with the various sites mentioned in the Catalogue of Ships. After reading conflicting stories of how the First Sacred War played out one turns to this section expecting some statement of the relationship between the archaeological evidence for the settlement of the Kephissos valley and the fashioning of the Phokian ethnos, but Franchi retreats from an analytic position to little more than a catalogue. She writes, "Die Phoker in statu nascendi hätten dann ihre Ambitionen auf der südwestlichen Seite des Parnassos durch die Wiederbelebung der Erinnerung an nicht mehr bewohnte Siedlungen - diejenigen, die im Schiffskatalog zitiert waren - ausgedrückt." This may be true, but it falls well short of an explanation of the complex processes she has asserted were at work.

Better is her treatment of the Phokian-Thessalian conflict in the sources of the 4th century, and especially in the statues and inscriptions from Delphi. Taking a cue from Michael Scott, Franchi explores the spatial politics of the temenos in what she nicely terms a "Denkmälerkrieg." Concentrating on the key decade after the Peace of Philokrates and before Chaironeia, Franchi demonstrates that the deployment of stories of Phokian aponoia in the First Sacred War was crafted to current circumstances: "Mittels der Erfindung der phokischen aponoia war es den Phokern möglich sich zu rehabilitieren, und den Athenern, ihre anfänglich Unterstützung der Phoker gegenüber Philipp zu rechtfertigen." (264-5) Similarly, Franchi concentrates on the traditions regarding Abai and Hymapolis, the two Phokian sites that dominate 4th century stories concerning early Phokis and refers to Hyampolis as the "Schauplatz" of a Phokian victory. For Franchi a 'theatre of war' is more than a place where battles occur. Yet her desire to be comprehensive again means that some of the impact of this literary-historical analysis is dissipated. In a detailed treatment of the current debate regarding the identification of Kalapodi Franchi judiciously comes down in favour of Niemeier's preference for Kalapodi as Abai, which is fair enough, but it is unclear how this lengthy (293-304), virtually self-sufficient essay contributes to the broader study.

Franchi returns to her reading of Phokian (and Thessalian) traditions in a discussion of the famous Chalk-Battle. Her conclusion is cautious but the argument is compelling: 'Es ist hingegen nicht auszuschließen dass die Geschichte im 4. Jh. in anthropopoietischer Hinsicht weiterentwickelt wurde.' (324) Once again, the initiatory context is adduced as the setting for these traditions, a strong possibility, if not a certainty.

In a final chapter ('7. Schlussbemerkungen') Franchi provides a twenty-five page summary that distills the entire monograph. Rather than providing conclusions it essentially recapitulates the entire work, and may be read as a useful guide to where fuller and deeper analysis of various questions can be found in the main text. The principal literary and epigraphic sources (with the exception of the Delphic material) are collected and presented as a dossier at the end (357-428). Overall, this is a stimulating study that should cause scholars to look more carefully at the gap dividing the Archaic world from memory of it in the 4th century.