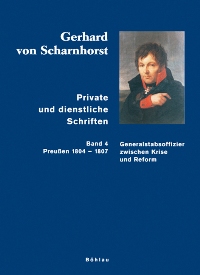 The latest volume of Scharnhorst's private and professional documents is the fourth in the series published by Böhlau since 2002 that is intended to cover his entire correspondence and official papers. The editors have deliberately eschewed the customary use of 1806 as a division in their series and instead have placed the material from this year of crisis at the heart of a volume that begins with Scharnshorst's transfer to the General Quatermaster Staff in April 1804 and concludes with the personnel changes that left him in undisputed control of the Military Reorganisation Commission in December 1807. The result allows the reader to follow not only Scharnhorst's mounting anxiety prior to Prussia's defeat at Jena and Auerstedt, but also his role during the war and its immediate aftermath. This juxtaposition of material reveals some fascinating continuities in his interests, activities and concerns across a timespan generally regarded as one of disjuncture.

The volume presents 411 documents of varying length, grouped in three main parts in roughly chronological order. While much of the material has appeared before in earlier, more selective editions, great efforts have been made to ensure that previously edited texts are printed in full. There is also a lot that is entirely new, including a few letters in private collections, additional material from the Prussian state archives and a large number of transcriptions (chiefly by Gerhard Oestreich) of papers that disappeared in 1945. The archive reference of surviving material is given in each case, even where it has already appeared in print before.

The first part covers Scharnhorst's activity in the General Quartermaster Staff until the outbreak of war in July 1806. The second continues with his active service until the Peace of Tilsit, while his role in the Military Reorganisation Commission from July 1807 forms the final part. Each section is subdivided, with private and service papers from the relevant time frame forming the first subsection in each case. These are most extensive for the period prior to July 1806 when he had more time to commit his thoughts to paper. His private correspondence, especially with his daughter Julie, and fellow Hanoverians like the military theorist and future general, Johann Friedrich von der Decken, reveals his concern for his homeland under French occupation and his mounting dissatisfaction with Prussia's vacillating foreign policy. It also contains gossip about current events and news of fellow officers and colleagues in other armies. Combined with the discussion of military affairs and professional publications, these documents indicate how Scharnhorst was embedded in a relatively extensive and cosmopolitan network of personal ties extending across German territorial boundaries.

His other main correspondents include Levin von Geusau, his immediate superior in the General Quartermaster Staff, as well as senior Prussian commanders like the duke of Brunswick and Prince Hohenlohe-Ingelfingen. The chronological arrangement allows the reader to follow Scharnhorst's thinking, especially on the deteriorating international situation, in both his personal and professional writings. Amongst the letters are also memoranda regarding the impending war with France, as well as lectures on military history.

The papers relating directly to his service in the General Quartermaster Staff are grouped separately in the second subsection of the first part dealing with the period prior to July 1806. They relate primarily to the Prussian mobilisation of November 1805 and Scharnhorst's concerns at the numerous defects this had exposed in military organisation and administration. The first part also includes a section on his role in the 'Military Society' (Militärische Gesellschaft) in Berlin, containing committee papers, book reviews, publishing plans and projects. The final subsection deals with his book on artillery (Handbuch der Artillerie) with some preliminary material dating from the late 1790s.

In contrast to the period prior to July 1806, the material for the war is less extensive, reflecting both its more limited physical survival and the hectic months that left little time for writing. The service papers largely concern the army's movement and supply arrangements during the campaign, and include a small number of previously unpublished documents. The second section contains his initial reflections on the war and the reasons for Prussia's defeat. Much of this stems from his enforced inactivity following his capture by the French in November 1806, and incorporates considerable material not published previously.

The papers from the military reorganisation commission established in Memel in July 1807 deal with the immediate aftermath of defeat when Scharnhorst was busy with pressing, but relatively mundane tasks such as the amalgamation of Prussia's surviving regiments and the reallocation of garrisons and recruiting districts. Nonetheless, it is clear that even at this stage the Commission considered more long-term questions of structural reforms. This section contains some of the most important papers of the entire volume indicating, as the editors point out in their short introduction, that the controversy over military reorganisation cannot be presented as a simple case of progressive reformers opposed by blinkered conservatives. Instead, tensions derived as much from personality clashes as disagreements over principles. Here, Prussia's post-war debate on military reform mirrors what Brendan Simms has identified for the pre-war wrangling over foreign policy where different options were promoted as ministers jockeyed for influence under a relatively weak monarch. [1]

The personal correspondence for the period after July 1807 includes some letters to Clausewitz, as well as old friends like von der Decken. The editors have included a substantial number of undated documents they have arranged in a more probable chronological sequence than that used in previous publications.

This is an important volume given the period and events it covers. The editorial work is first rate, with exceptionally full annotations, an invaluable glossary of specialist terms and useful concise biographical sketches of Scharnhorst's more important correspondents.

[1] Brendan Simms: The impact of Napoleon. Prussian high politics, foreign policy and the crisis of the executive, 1797-1807, Cambridge 1997.