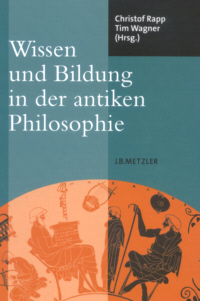 The title of this book, and the impetus for the collection, emerged from the first congress of the Gesellschaft für antike Philosophie at the Humboldt-Universität, Berlin in October 2004. The volume doesn't represent all the papers delivered at that occasion, and, in some cases, reproduces papers published elsewhere. Under the general theme Wissen und Bildung, nineteen diverse contributions are presented in somewhat awkward, partially chronological, groupings. Rather than a comprehensive treatment of the theme, the collection instead offers a wide ranging, methodologically varied, sample of some of the premier scholars working on ancient philosophy and the results of their research.

The volume opens with an introduction by the two editors, who sketch out the main themes to be treated in what follows. These interconnected themes - the definition, acquisition and transmission of knowledge, the relationship between knowledge and virtue, and the educational goal of personal development - are here predominantly examined through the writings of Aristotle and Plato.

The opening section of the volume - Wissen und Bildung in der Antike - presents two stimulating treatments by A. Dihle and P. Scholz. In 'Lebenskunst und Wissenschaft', Dihle examines the relationship between research and philosophy from the pre-Platonic through to the Hellenistic and Roman periods. His exemplary analysis draws from his depth of knowledge - not only of ancient philosophy but also the history, literature, and culture of antiquity - a historically nuanced picture of this development. Scholz's study, 'Bios philosophikos. Soziale Bedingungen und institutionelle Voraussetzungen des Philosophierens in klassischer und hellenistischer Zeit', looks at the tension between philosophy and society in antiquity and how this was resolved through the medium of education. He provides a much needed and important socio-historical contextualisation of philosophical thought in the ancient world. [1]

In the second section of the volume - Vorsokratiker und Sophistik - A. Laks and T. Buchheim offer two very different discussions, placed here together simply because they touch on thinkers prior to the Platonic period. Laks opens the section with 'Gadamer, Parmenides und die Vorsokratiker. Eine kritische Würdigung'. This study on the reception history of presocratic philosophy demonstrates how Gadamer's response to the presocratics was determined by his reaction to contemporary and past assessments of their significance within the history of philosophy more generally. [2] Buchheim's treatment, 'Händler des guten Lebens. Sophistische Erziehungsideen', looks at four contributions of the sophistic movement to theories of education: i) the teachability of virtue, ii) the value of agonistic practices for education, iii) the idea of non-specialist knowledge and finally iv) the way a discontinuity between physis and nomos makes education necessary. [3]

The third section, devoted to Plato, comprises of five papers by F. v. Kutschera, W.-R. Mann, D. Frede, M. Bordt and T. Ebert. 'Der Wissensbegriff bei Platon und heute', by Kutschera, opens the section with a philosophical treatment of the role of the concept of knowledge within Plato's ontology. Tracing the development of this concept from the Apology to the Theaetetus, this discussion shows that Plato aimed to demonstrate that the only true knowledge was dialectic knowledge and then looks at the value of Plato's conception of knowledge for modern philosophy. Mann's discussion of the Euthydemus, 'Was kann man von Euthydemos und seinem Bruder lernen?', looks at the problem of the purpose of Plato's representation of the arguments of Euthydemus and Dionysodorus. He argues through a close examination of the characterisation and structure of this dialogue that it should not be understood merely as a contrast between eristic and dialectic. In the third paper from this section, Frede examines the propaedeutic function of mathematics within the curriculum proposed in Plato's Politeia. Mathematics was there part of the necessary training for the philosopher king and a preparation for dialectic. Frede's account looks broadly at the impact of Plato's theories on the development of the university in the middle ages and the modern world. [4] Bordt, in 'Verstehen, wie die Götter sind. Zum Verhältnis von Theologie und Metaphysik in Platons Politeia', considers the relationship between the conception of god in the 2nd book and the idea of the good in the 6th and 7th books. Contra to Solmsen's argument, Bordt shows that the insistence of the unchangeability of the gods proves that Plato's theology here is dependent on his metaphysics. [5] In the final paper of this section, 'Platon über den Wert der Wahrnehmung', Ebert examines at two passages in the Phaedo for their discussion of the valuation of perception. He shows that Plato saw a positive role for perception in the formation of knowledge. [6]

The fourth section contains papers by V. Caston, A.W. Müller, M.F. Burnyeat and E. Schütrumpf on Aristotle's contribution to concepts of knowledge and education. The first, 'Was es heißt, die Form ohne die Materie aufzunehmen. Wahrnehmung, Vorstellung und Denken bei Aristoteles', is a translation of a section of Caston's 'The Spirit and the Letter: Aristotle on Perception' [7] and treats the way perception and memory were connected proportionally to reality in Aristotle's image of the wax seal. Müller's paper, 'Zur Teleologie der aristotelischen Phronêsis', examines the function of phronêsis for the virtuous life as discussed in the Nicomachaean Ethics. He shows that good action is a characteristic product of phronêsis and thereby that virtuous motivation is not the telos but a condition of thought. The next paper, 'Lernen, ein guter Mensch zu sein. Aristoteles über moralische Bildung und Charakterentwicklung', is a translation of Burnyeat's 'Aristotle on Learning to be Good'. [8] Here, Burnyeat considers the stages of the development of virtue particularly with reference to the Nicomachaean Ethics. The importance of habituation, the practice of right action, shows the cognitive power of practice through which one learns to be noble and just. In the final paper in this section, 'Erziehung durch den Staate. Beschränkung und Befreiung der Individualität in Aristoteles' bestem Staat', Schütrumpf looks at the place of individuality within a uniform ideal state education as presented in Aristotle's Politics, VII/VIII. In the concept of leisure, Schütrumpf identifies a space in which Aristotle accommodates individuality within his conception of the ideal state. [9]

The next section, entitled Akademie und Peripatos, contains two very different papers by I.M. Bodnár and G. Wöhrle. Bodnár, in 'Wissenschaft und Philosophie in der Akademie', treats the role of mathematical research in the Academy of Plato, arguing against Neugebauer's idea that the theoretical undertakings of the Academy contributed little to mathematical research. Through a reconsideration of the evidence, he shows that both the Academy and Peripatos were actively involved in the differentiation of the mathematical sciences from philosophy in different ways. Wöhrle offers a specialist consideration of Theophrastus' Historia plantarum and De causis plantarum in 'Vom Nutzen der Pflanzen für den Menschen. Anthropozentrische Perspektiven in Theophrasts botanischen Schriften'. [10] Here, he is able to differentiate Theophrastus' achievement of the first systematic ordering of the plant kingdom from his methodological dependence on Aristotle. Though much of Theophrastus' work is devoted to the usefulness of plants for men, this practical anthropocentrism does not impinge on his consideration of the self-orientated telos of plants.

The next section, Platonismus und Aristotelismus, contains two papers by A. Schmitt and W. Detel on conceptualisations of knowledge in Plato and Aristotle. Schmitt, in his paper 'Konkretes Denken. Zur emotionalen und praktischen Bedeutung des Wissens im Platonismus und Aristotelismus', considers the old Romantic idea of the original unity between the sensory and the intellectual as exemplified in Schadewaldt's conception of the Greeks. He contextualises the development of this idea in modern scholarship with historical and theoretical developments of the time, and shows that this notion finds justification in the ancient evidence itself. [11] Detel's 'Wissenskultur bei Platon und Aristoteles' looks at Platonic and Aristotelean epistemology as an articulated "Wissenskultur", which was differentiated from that of rhetoric. Detel argues for the value of the perspective of post analytic philosophy for the better appreciation of this "Wissenskultur".

In the last section of the book Hellenismus, K.M. Vogt and C. Horn, present discussions of Sceptical and Stoic ideas of knowledge. Vogt, in 'Skeptische Suche und das Verstehen von Begriffen', examines the works of Sextus Empiricus for the Sceptical answer to the question how a Sceptic could investigate without endangering the consistency of his own philosophy. According to her view, it is the place of the leadership of nature in Sceptic thought which enables them to counter this ancient critique and affirm an ability to investigate after the discovery of an abstention from judgement and the state of calmness. [12] In 'Was weiss der stoische Weise? Zur Epistemologie der stoischen Ethik', Horn argues against Annas [13] for the cosmological basis of Stoic ethics. Through the image of the wise man, Horn examines the basis of comprehensive knowledge and the potential to develop such knowledge. Through such, the wise man became equal to the kosmos, and consequently his knowledge became that of the kosmos.

Each contribution is provided with a relevant bibliography at the end of the article. A comprehensive bibliography of sources is also found at the end of the volume. The degree of referencing depends on the needs and practices of each individual scholar and as such varies considerably. Throughout the volume, translations have been provided of the sources in question, with the Greek text often provided in footnotes. Few typographic errors appear in the volume, and these more frequently in the footnotes (e.g. "und und" p. 257, and "Miverva", p. 128, n. 5).

The volume as a whole provides an excellent overview of scholarship in this field and an introduction to the important theses produced by each scholar in his or her area of speciality. It is certainly representative of the development of scholarship in this field over the last thirty or more years. One may have expected more treatment of education in this volume and even a greater attention to late Hellenistic and Roman philosophy. However, these minor quibbles ought not diminish the significance and value of this collection. These contributions, often distilled out of earlier research, are thought provoking, important, and especially valuable in the diversity of approaches and topics covered. The repute of the scholars involved will make this reading essential for anyone interested in the achievements of recent research.

[7] Translation of a section from 'The Spirit and the Letter: Aristotle on Perception', in: R. Salles (ed.): Metaphysics, Soul and Ethics: Themes from the work of Richard Sorabji (Oxford 2005) 300-315.

[9] Drawing from Schütrumpf's current projects on commentaries and translations of Aristotle's Politics, this discussion returns to his earlier focus on the concept of the polis in Aristotle's works: Der Analyse der Polis durch Aristoteles (Amsterdam 1980).

[11] This contribution draws on Schmitt's current research project on the relationship between Platonic and Aristotelean epistemologies and those of the modern period. It utilises his extensive knowledge of Greek literature and the reception of antiquity.