James A. Arieti: Philosophy in the Ancient World 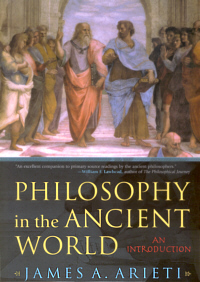 Arieti's book is an ambitious attempt to cover the history of ancient philosophy from Homer to Boethius. The work is meant to supplement reading of ancient philosophical texts, either in the original or in translation, and seeks to provide an historical and social framework for the development of Greek thought (xvii-xviii).

The task of providing a general guide, covering such an extensive period of time, is no small one. Any such text book is bound to dissatisfy scholars in the field. There is always more to be included and the process of simplification often introduces misrepresentation and distortion. The difficulties are magnified for Arieti because ancient philosophy is neither simply philosophy or history. Though Arieti's background and focus is unrepentantly philosophical, history is brought into this book in order to illuminate the human context under which such thought develops. As Arieti states "This book aims to show the humanity of the philosophers and to examine their thought as the product of human minds" (xviii, see also 2).

This aim is not without precedent. Indeed several fine examples of such scholarly interest have been provided within the last few decades. [1] Introducing the beginner to such an outlook is to be commended.

This book is provided with a time line, map, illustrations and glossary. Each chapter is provided with a select bibliography and discussion questions, prompting the student's own personal response to the material covered. The focus of the questions and bibliography is philosophical, not historical. Speculation rather than informed inquiry seems to be the desired result. In many respects the presentation and aims of these questions run counter to the methods and requirements of a true historical engagement. For this reason, Arieti's book ought only be employed in the teaching of philosophy and not history.

Arieti begins his discussion with a justification and definition of the study of ancient philosophy (2 ff.). Both are wedded to the humanistic aims of the study. "The story of human philosophy is inseparable from the story of human beings - and in particular of human beings whose lives were complicated because of the pursuit of wisdom" (2). Here philosophy in the ancient world is raised as a paradigm of virtue, of struggle and humanism to be emulated by the student. The lives of the philosophers are written up in an eulogistic fashion - they become intellectual martyrs - and in stark contrast to the world of modern scholars. "Far from leading cloistered lives in ivory towers with only mildewed books as companions, the philosophers of the ancient world lived amidst the swirl and din of their fellow humans" (4). The highly emotive tone of these pronouncements sets the didactic style of the entire work. Arieti's engagement is personal, emotional, and vivid. It incites an emotional response in the reader, and through this aims to bring a humanistic colour to the study of ancient thought. This emphasis has an effect on the presentation. Ancient philosophy is filtered through its capacity to provide insight for the modern day. Hence, the definition of philosophy that Arieti uses is modern [2] and does not attempt to deconstruct what the ancients themselves understood by philosophia. The presumption is that the two are the same.

The book is organised into eighteen chapters which survey, in a roughly chronological sequence, major individuals and some historical moments relevant to the development of ancient thought. The selections are thoroughly traditional, both from an historical and a philosophical point of view. With each sequence of famous individuals, some historical points of reference are added for contextualisation. For example, Arieti begins his discussion with Homer and Hesiod coupled with considerations of the polis, art and architecture (chapter I). The sequence of philosophers is by and large that of the doxographical tradition, beginning with the Milesians Thales, Anaximander (chapter II) and Anaximenes, followed by the Italian school represented by Pythagoras (chapter III). Chapter IV offers up Heraclitus, Parmenides, Zeno and Melissus as a turn of the century phenomenon. There is little here in these opening chapters which deviates from the presentation of the ancient doxographical tradition - either in sequence or content. Diogenes Laertius would be at home in Arieti's pages, however more recent scholarship has sought to disentangle history from the fabrications of this retrospective arrangement. [3]

Chapters V to XI survey the Classical world from the Persian Wars to Aristotle. Throughout these chapters, Arieti attempts to incorporate historical events into the discussion of prominent individuals. For Arieti the impact of history is merely political e.g. the structure of the state, the impact of war, etc. Economic developments, which are undoubtedly more crucial for the development of a discipline dependent on patronage and leisure, are not discussed. Some attempt is made to situate philosophy amid the other disciplines emerging in the Classical period, such as rhetoric, sophistry (chapter V), medicine, tragedy and history (chapter VI). These other disciplines (like philosophy itself) are viewed through their textual history and (somewhat anachronistically) as fully formed, distinct disciplines. What is missing is the human context for these movements i.e. the performance context of ancient tragedy, the civic role of doctors in the ancient world, the legal context for the emergence of rhetoric. In addition the admirable aim of showing how philosophy developed in relation to these other fields is hampered by not acknowledging that these alternate disciplines, like philosophy itself, were not definitely distinguished from one another in this initial period and quite frequently overlapped.

It takes Arieti over two hundred pages to reach the Hellenistic world, giving a rather uneven feel to the survey. The remaining seven chapters briefly survey an odd selection of events and individuals. In chapter XII he presents a rather outdated discussion of the impact of Alexander on the Hellenistic world. Few Hellenistic historians will be satisfied with the reduction of this period to the traditional line of cultural deterioration through the destruction of the polis (235). Chapters XIII and XIV cover Epicureanism and Stoicism without discussion of the significance of the shift of power to Rome for the pursuit and place of philosophy. Events crucial to the development and conceptualisation of the philosopher, such as the banishment of all philosophers from Rome by Domitian in A.D. 92, are left without comment. Despite the essential role of Roman ideology for our understanding of these movements, Rome only makes an entrance into Arieti's work in the subsequent chapter (XV).

Arieti rapidly concludes his book with a mere three chapters covering philosophy from the Roman Empire through to Late Antiquity (295-358). Attention is given only to a select few - Philo, Minucius Felix, Basil of Caesarea, Plotinus, Augustine and finally Boethius. With such limited space, Arieti focuses his attention to the coming of Christianity and its impact on philosophy, to the detriment of many other issues. Though this is clearly the most important shift for the period under consideration, a lack of space has meant that Arieti has been unable to set forth an adequate picture of how and why this development happened.

Comprehensiveness is not something easily managed in a text book, and so one might dismiss many of the details listed here that may have been considered. [4] However when the material omitted clearly would have enhanced the self-professed aims of the author, one has some right to quibble. The omissions mentioned do not come close to an exhaustive listing. One may finally note also the absence of a sufficient discussion of sophistry, the second sophistic, neopythagoreanism to name but a few. The bibliographies provided at the end of each chapter have notable, serious omissions and errors. [5] In addition citation by fragment number alone gives the prospective student little opportunity to recognise the source difficulties present. Such detail is essential for distinguishing what we can know from what is 'known' about these figures. Historical and / or biographical information about these ancient thinkers is by and large absent from Arieti's account.

What Arieti provides is a sound, though superficial, survey of the theoretical outlook of individuals presented in chronological succession. This gives the student very little means to illuminate the human considerations underpinning these theories, dependant as such considerations are on historical circumstance. One is left to conclude that by 'human' focus, Arieti simply alludes to the passionate method in which he personally responds to these thinkers. [6] Students in philosophy departments may find this an entertaining read providing marginal historical contextualisation, however students in ancient history ought to be disturbed not only by the lack of serious historical consideration but by the repeated insinuation that the historical context is somehow irrelevant. [7]

[1] For example, R. Netz: Greek mathematicians: A group picture, in: C.J. Tuplin / T.E. Rihll (eds.): Science and Mathematics in Ancient Greek Culture, Oxford 2002, 196-216 and F. Decleva Caizzi: The Porch and the Garden: Early Hellenistic Images of the Philosophical Life, in: A. Bulloch et al (eds.): Images and Ideologies: Self-definition in the Hellenistic World, Berkeley 1993, 303-329. The interest in the human and historical world of thinkers is by no means restricted to the ancient world, see for example S. Gaukroger: Descartes. An Intellectual Biography, Oxford:1995.

[3] See for instance, A. Capizzi: The Comic Republic. Notes for a non-Peripatetic History of the Birth of Philosophy in Greece, Amsterdam 1990.

[4] For the presocratics, very little attempt is made to give the 'humanistic' context envisaged by Arieti. For example, for Parmenides Arieti says nothing of his human context save that he was from a noble family and wealthy (73), a fact which applies to almost all ancient thinkers. Little critical attention is given to the information provided in biographies of these thinkers, nor any discussion of the significance of this biographical tradition for considerations of the impact of philosophy on life. For Pythagoras, an attempt to deduce the historical individual within the traditions concerning him is negated by Arieti as "hopeless" and "unnecessary" (134). With Aristotle, no attempt is made to explore the human context of this thinker in terms of his relationship as tutor to the young Alexander (chapter XI). Nor do we find a discussion of the impact of Aristotle and the Peripatetics on the history of philosophy more generally, despite Arieti's repeated insistence on explaining earlier thinkers through Aristotle's comments (see pp. 13, 17, 30 in particular but examples are scattered throughout). No attempt is made either to utilise the vast surviving evidence concerning Cicero as politician and man. Here more than anywhere was there the opportunity to see the interaction in one man of philosophy, personality and politics.

[5] The most troubling example, Hermann Diels' fundamental work "Doxographi Graeci", Berlin 1879 is listed under A. Diels (42 n. 4). We find no reference to W. Burkert's fundamental work on Pythagoreanism "Lore and Science in Ancient Pythagoreanism", trans. E.L. Minar, Cambridge, Mass. 1972, in chapter III; nor to H. Tarrant's work on the Academy "Plato's First Interpreters", London 2000; nor to A.B. Bosworth on the Hellenistic world "Conquest and Empire: The reign of Alexander the Great", Cambridge 1988, nor to A.A. Long: Hellenistic philosophy: Stoics, Epicureans, Sceptics, London 1974; nor to P. Hadot's work on Marcus Aurelius "Philosophy as a way of life: spiritual exercises from Socrates to Foucault", trans. M. Chase, Oxford:1995; nor to D.T. Runia's work on Philo "Exegesis and philosophy: Studies on Philo of Alexandria" (= Variorum collected studies series 332), Aldershot 1991. Bibliographies provided on Plato, performance of ancient tragedy, ancient medicine, Greek education, and Hellenistic history in general, are outdated.

[6] Thus Arieti feels compelled to write "A young person discovering Plato feels the exuberant exhilaration of falling in love for the first time." (192).

[7] See for instance the damning rejection of historical efforts to discover an historical Socrates or Pythagoras (134). See also the denunciation of attempts to establish the chronological sequence of the Platonic dialogues (chapter X, esp. 170 ff.). A particularly worrying example is provided by Arieti's discussion of Timaeus' comments on spheres (182) where Arieti renders what he cannot understand here as an arbitrary choice of Timaeus.