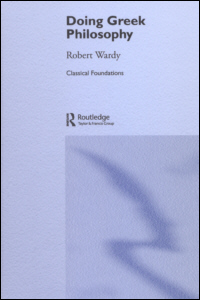 This slim volume is the fourth to emerge in the Routledge series entitled Classical Foundations, designed to initiate beginners into the concerns, sources and resources of topics in ancient history and classics. Unlike the focus of other volumes in the series, Wardy's interests - as the title betrays - are philosophical and not historical. For Wardy, the philosophical nature of the history of philosophy is primary. The engagement with and interrogation of past thinkers is Greek philosophy, both then and now (22). The introduction to this dynamic - emphasising the importance of dialectic and reflection - is Wardy's chief concern (21: "it turns out that historians of Greek philosophy proceed in a fashion which is much more than superficially related to the procedures of those they study: ancient work is the inception of (the history of) philosophy"). Thus, rather than provide a "bland summary of doctrines" (22), Wardy has structured his work to place the early thinkers in dialogue with one another, and thus also with reader and author.

The book is divided into three chapters with introduction, notes, bibliography and index. The notes provided at the end of the volume are of limited number, though represent extensive discussions in themselves. The bibliography itself is disappointing. It is indeed a "bare minimum" (22), but hardly so innocent. Barely two full pages long, it is an odd collection of important source works, general treatments and specific articles which betrays a dominance of Cambridge publications. Wardy presents his bibliographical selection with the following apology: "The absence of scholarship not written in English arises from my target audience and is not a reflection on the quality of non-Anglophone research" (127, note 10). However, the tendency of Anglophone scholars to avoid non-Anglophone research has for some time been such a problem that now publications of translations (both early and recent) into English are abundant. Moreover, many Europeans are now publishing in English in order to redress this problem. Given the extensive and long standing efforts of European scholars to accommodate Anglophone readers in these ways, such bibliographic omissions are unacceptable.

Wardy's introductory chapter, "Doing and Living Philosophy", champions many of his aims. In the opening pages, Wardy sets up a dialogue with his reader, directing them to imagine themselves to be an entrant or current university student interrogated by a stubborn interlocutor about why they have chosen to pursue philosophy. This narratological device, borrowed from the ancient philosophical tradition, is designed to engage the reader in the "living philosophy" of dialectic. It is certainly an effective place to begin. Within these pages Wardy first broaches the difficult problems of what constitutes philosophy and how it is to be differentiated from other disciplines. Clear, simple and practical examples aid the didactic purpose, though often lapse into a praise of philosophy as the superior discipline amongst all disciplines. The presentation of philosophical problems, related to everyday situations, exemplified by ancient thinkers and connected with modern philosophies succeeds in bringing the uninitiated reader directly and personally into the matter at hand. The value of the study of ancient philosophy is here determined by the notion of a productive dialectic between the past and the present, in which the past becomes a tool for modern philosophical debate.

The first chapter, "Opposition, relativism, contradiction", delves into Heraclitus, Xenophanes and Protagoras. To begin with, Wardy revisits the eternal problem of what the 'Presocratic' classification means, and thereby engages briefly in the question of how ancient philosophy viewed itself. Wardy follows the modern consensus of viewing the beginnings of philosophy as an autonomous discipline as Platonic in origin (33). He defends the category 'Presocratic' by pointing to the impact of Socrates and unites the 'Presocratics' through their "initial, pioneering articulations of exclusivity"(34). Here in this chapter the question of evidence, first alluded to in the introduction (24), is fleshed out (34 ff.). Doxography raises its ugly head and the traditional distinction between fragmenta and testimonia is defined. Later on, the problem of the historical veracity of the representations of individuals in Plato's dialogues is discussed (75f.). The question of how to read the Greek philosophers, particularly in light of ambiguities in the Greek, is suitably placed as an introduction to Heraclitus (38 f.). From then on, Wardy leaves off these issues (missing perhaps a valuable opportunity to relate these crucial issues directly to questions of interpretation) to focus on the interaction between the notions of relativism in these three thinkers following the methodology of restoring to the 'Presocratics' the best possible, consistent and stable, arguments (73) which was proposed in his introduction. The highlight of this chapter, which itself is filled with assumptions that are uncomfortable for the historian, is the explanation of Greek morality provided for the examination of Xenophanes' 'rational theology' (52).

In the second chapter, "Refuting the irrefutable?", Wardy turns again to the problem of the Platonic dialogues as sources. Wardy presents the dialogues as documenting a substantive Platonic philosophy and designed as such (84). He explicitly rejects the notion that Athenian tragedy and comedy presented any model for Plato's choice of genre in the presentation of philosophical ideas (84). Rather the dialogue form, attested also in Xenophon, is read as an attempt to represent and promote dialectic. Wardy's dogmatic statements here on how to read Plato thus avoid engagement with the doxographical tradition, which at several points states that Plato wrote tragedies and competed for prizes in this genre (e.g., Dicaearchus ap. Diogenes Laertius III.5, see also III.18). Given Wardy's strong beliefs on this matter, ought not this have been the perfect opportunity for Wardy to demonstrate to the student the pitfalls of engaging in the doxographical material? Wardy advocates an "open reading" (85 ff.) of the dialogues, but does not avoid mentioning other means of treating the works, albeit briefly. Such an "open reading" is exemplified by the examination of the appearance of the Heraclitean notion of flux in the Theaetetus. From Plato then to Aristotle Wardy traces responses to Heraclitus and Protagoras.

The final chapter in the book, "A life without belief?", by far the shortest, is devoted to the Sceptics and their response to Heraclitus and Protagoras. There is some mention of the doxographical problems in accessing the Sceptics, but the discussion is minimal. This chapter, where the notion of philosophy as a way of life is brought into view, is the most problematic of the book. There is little attempt to discuss how developments in the literary tradition have shaped the presentation of the Hellenistic philosophers. Nor is there much socio-historical contextualization of the movement. The chapter, and book, end abruptly without any guidance as to how the student ought to move on in the subject.

The strength of this book is to be found in the practice of tracing a particular theory throughout various periods of interpretation in the ancient world. This gives the student a firm thread to follow whilst being introduced to a miscellany of further information about the individuals concerned, methodology and source problems. However there is much to confuse the student here. Wardy's statements about the language requirements for the study of Greek philosophy end up seeming contradictory. Moreover, though Wardy at several stages comments on the importance of historical contextualization, the whole book suffers from a poverty of sensitive historical analysis. The main flaw is the absence of historical contextualization. In general, concerns about the authenticity of a source are only considered when the statement in question does not concord with the brilliance ascribed to a thinker. Thus a single doxographer can be regarded simultaneously as authoritative and careful as well as sloppy, ignorant and inventive depending on what section of his text is under discussion. The approach of reading, as Wardy would have it, to attribute the best possible arguments to each thinker is thus to engage in a frankly anti-historical analysis. But, at least, this is consistent with Wardy's conception of historical analysis, which can only be done through critical dissection of the arguments of each thinker (15). Text and source critical methodologies are rendered void.

The long standing, albeit entirely modern, problem of the interdisciplinary sharing of the subject of ancient philosophy is, though frequently acknowledged, often ill-articulated. Consequently, divergent methodologies, aims, attitudes remain for the most part unreconciled and, more dangerously for the student, undifferentiated. This problem is perhaps the most insidious trap for the uninitiated and begs illumination in an introductory work such as Wardy's. However, though the topic intrudes often, both explicitly and implicitly, Wardy's statements present a contradictory morass that infects what would otherwise be a very successful seduction into the world of ancient philosophy.