Anthony Francis Natoli: The Letter of Speusippus to Philipp II 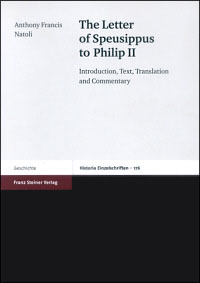 This monograph represents the first concentrated discussion of the 30st Sokratic Letter (Orelli's numeration = 28 Koehler / Allazzis) since the edition of Elias Bickermann and Johannes Sykutris in 1928 [1] and as such provides a valuable contribution to current interest in the post-Platonic Academy and its historical context. In addition to the introduction, text, translation and fulsome commentary on the Letter of Speusippus to King Philip II of Macedon, Natoli's monograph also contains several appendices, offering text and translation of five additional letters of Plato (including one to Philip, whose authenticity is defended by Natoli), and a discussion of the expulsion of Amyntas III. Although the letter of Speusippus itself offers little information pertinent to his philosophical thinking, it provides a rare glimpse into the modes of interaction between prominent intellectuals and political leaders during the fourth century B.C.E. and it is within this sphere that Natoli's analysis appears most thorough.

Natoli begins with a summation of the methodological considerations necessary to establish the authenticity of the letter. The manifold difficulties of such an enterprise are both sensitively acknowledged and pragmatically resolved. For Natoli no absolute proof of authenticity is possible (19). Comparison with fragmenta and testimonia provide no assurance when such evidence is contentious. Natoli suggests that at best a probable authenticity can be ascertained through consideration of the following internal features: language and style; coherence, depth and subtlety of argument; and historical allusion (24-26). The first of these plays a minimal role in Natoli's argument, principally because Natoli considers the analysis of Sykutris, who concluded that the letter showed lexical and grammatical consistency with fourth century texts, to be both sufficient and convincing. It is thus on the latter two criteria that Natoli's argument is built.

Subsequently Natoli introduces the first of his interpretive divergencies from the Bickermann/Sykutris edition. For Natoli the letter was not designed for dissemination to a wider public, in particular an Athenian public, but a specifically purpose-built address to King Philip himself. This position is amply defended with reference to the numerous historical issues brought up by the letter. In particular, mention by Speusippus of Antipater's arguments supporting the Macedonian conquest of regions such as Amphipolis would have been offensive for an Athenian audience in the 340's (21). The sensitivity of this issue is illustrated well by comparison with Isokrates' attempt to advocate the return of Amphipolis to Athens in his letter to King Philip, undoubtedly aimed both at the Macedonian court and the Athenian public, as well as by numerous references found in the Attic orators.

Natoli begins his argument for the authenticity of the letter by first considering the earliest attestation of the letter in the secondary tradition - that is, the quotation by Carystius of Pergamum (2nd century B.C.E.) preserved in Athenaeus (Athenaeus, 'Deipnosophists' 506e-f). His discussion considers such issues as Athenaeus' reliability, his familiarity with Carystius' works, Carystius' own sources and the probable content of Carystius' 'History' (23). He rightly asserts that although such evidence is well after the supposed date of composition, by comparison with the evidence for the Platonic, Demosthenic and Isokratean letters, the Speusippus letter stands on equal if not better footing. After outlining the linguistic analysis of Sykutris, Natoli moves to introduce the two features which most suggest a fourth century date of composition by Speusippus himself. These are the sophistication of the rhetorical argument employed and the concentration of detailed historical allusions to the 340's (26-31).

Natoli is able to see a greater coherency in the argument of the letter by showing how all elements within the letter are introduced to serve an argument based on the concept of reciprocal benefit - euergesia (27). This is the great strength of Natoli's interpretation - by appreciating the cumulative effect of allusion and structure in the letter he is able to show the sophistication of the rhetoric employed (66-100) and hence how Speusippus used the argument of euergesia to subtly introduce other less palatable themes, such as Philip's debt to Plato. Natoli's interpretation has the advantage of solving problems such as the omission of any argument in defence of Plato, as might be expected from the opening sections of the letter (94).

Greater significance is given to Speusippus' arguments through detailed reference to the historical circumstances of the 340's B.C.E. In this analysis too Natoli proves to be both a critical and sensitive scholar. Evidence from fragmentary and extant historians is brought into discussion as well as inscriptional information concerning the nature of both Greek and Macedonian politics at this time. Natoli is at pains throughout to give the reader both a comprehensive picture of the evidence for any one issue as well as a guide to scholarly opinion on such evidence. Despite such exhaustive disclosure, on occasion one laments the absence of Natoli's own judgement (e.g. at 121).

The Speusippean letter, as Natoli observes, is an important case in point on the ill-defined distinction between historical and mythological fact (66). Natoli has drawn attention to the deliberate manipulation of historical detail within the letter for polemic and political aims. In particular, the use by Speusippus of reference to Alexander I's execution of the Persian ambassadors is shown by Natoli to be a misrepresentation of chronology and fact (81). This is especially striking as Speusippus criticises Isokrates for his historia in section 11 of the letter.

It is in this last feature of the letter, the criticism of Isokrates, that Natoli's experience with the Isokratean corpus provides unique insight. Speusippus attempted to impinge upon Isokrates' reputation not only in terms of his loyalty to Philip but also with regard to his rhetorical and educative technique. By careful exegesis of Speusippus' criticisms and close comparison with Isokrates' 'Philip', Natoli is able to show that Speusippus misrepresents the arguments of Isokrates in order to show the superiority of Antipater's, and hence the Academy's, appreciation of Philip's authority (84-94).

One area on which we might have expected a more concentrated discussion is the question of transmission. The letter itself offers numerous details important to consideration of the means by which groups exchanged ideas, from inter-textual references to specific details on reception and presentation of works. Though Natoli deals with each of these separately, there is no unified discussion on this theme. Moreover details relevant to the manuscript tradition or the context of preservation of these texts are infrequent. One would like to know, given that the letter is not ascribed to Speusippus in the manuscripts, which works it was preserved alongside, as well as where it was placed in regard to the other Sokratic letters.

An unfortunate weakness of Natoli's edition is the surprising frequency of typographical errors. One certainly expects more of a volume of 'Historia-Einzelschriften'. Errors appearing in the discussion are of less concern than the errors present in the Greek text. Many careless mistakes in accentuation are evident throughout. Whilst these do not significantly impede our understanding, typographical problems have left at least two incorrect forms in the text. The most problematic is the form of the verb katasesiōpein given in section 5 of the Speusippus letter. Natoli's text reads the nonsensical katasesiōpēkai where katasesiōpētai ought to stand. [2] On closer comparison of Natoli's text with that of Bickermann and Sykutris few significant new readings are present. As a result, subsequent research on the Speusippean letter will still depend on the older edition for an accurate rendering of the text.

The manifold benefits of the historical discussion as well as the provision of sound translations for the letters included commend Natoli's monograph to researchers interested in other evidence pertinent to the praxis of intellectuals in the ancient world. Natoli's comprehensive knowledge of the historical context in conjunction with his familiarity with important related works of Plato and Isokrates makes for a valuable contribution to studies of the fourth century in general.