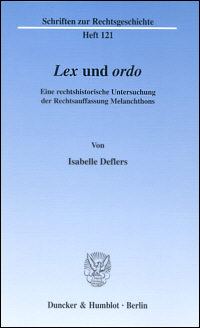 This book, the author's doctoral dissertation, is a narrowly formulated legal history. In the introduction, the author couches the study as a consideration of Melanchthon's understanding of natural law, adding to the numerous publications about him appearing since his birthday quincentennial (1997). Deflers' primary understanding of the significance of Melanchthon's contribution to the law lies in his role in the development of natural law thinking between the Middle Ages and the seventeenth century. Here she argues, in the context of relevant secondary literature, that Melanchthon's thinking suggests that the Reformation was not so much a watershed as a point of transition in the ongoing struggles to define the relationship between divine and natural law on the way to a seventeenth-century natural law based purely on reason.

Two major sections treat Melanchthon's understanding of "law" and his definition of the ordo politicus. In the first, Deflers presents Melanchthon's tripartite understanding of the law in the 1521 Loci communes in terms of natural, divine and human law. His notion of natural law was "biblical" insofar as it stems from the divine law absolutely encoded in the Bible, especially the Decalogue. Deflers notes early misunderstandings of this thinking before turning to the doctrine of the two kingdoms. Then she demonstrates Melanchthon's unique combination of the ancient heritage with aspects of late medieval scholastic legal thinking and notes his decision to ignore contemporary Spanish jurists (who developed their thinking on natural law in the encounter with the non-Christians during the conquest). Melanchthon's initial understanding of natural law in its relationship to the temporal order was a holistic one. As in the case of all the Wittenberg reformers, however, his thinking was substantially influenced by the early appearance of radical theologians and the employment of concepts from the early Reformation to justify the positions of their movements, especially the Peasants' War. Deflers' description of the peasants as longing for freedom and order in an age of chaos may strike readers as overstated, but her connection of Reformation notions of natural law with peasant definitions of "old" or "godly" law is a real contribution. Some features of peasant arguments and resistance to the Reformation reception of Roman law have already been treated by Gerald Strauss, whose controversial arguments Deflers unfortunately does not engage.[1] Melanchthon was originally sceptical of the Roman law, but contacts with Jerome Schürpf convinced him of its worth; his writings on it stress the need for a stable, established law and legal security in the Empire. Here the relationship to his other reasoning - the protection against human sinfulness - seems obvious, and indeed, Melanchthon was ultimately to claim that Roman law squared effectively with natural law except in cases of collision which arose from human sinfulness.

In the second part, Deflers uses this definition of law to postulate a Melanchthonian political theory, more appropriately characterized as a discussion of the obligations of the prince. Here we see the ways in which Melanchthon's ideas about natural law played into Lutheran notions of temporal political sovereignty; indeed, this notion supported the need for absolute obedience to the sovereign. While some readers will find this explanation sufficient, it leaves questions about the development of resistance theory, and this section of the book makes almost no reference to the significant secondary literature on this topic. Deflers postulates two periods, a rejection of resistance anchored in the response to the Peasants' War, and a recognition of the need for self-defense developed in response to threats to the evangelical princes leading up to the Schmalkaldic War. But Deflers' development of the relative political authorities of sovereign, church and pope focuses heavily on Melanchthon's Unterscheid des Kirchenampts und weltlicher Obrigkeit (1559), composed after the siege of Magdeburg and its development of ideas about the potential right for political resistance. I found myself wondering whether there were signs of a third period in Melanchthon's thinking.

The book is a success as a revision of the narrative of legal history via the inclusion of Melanchthon's thinking as key to the development of later Protestant notions of law and as a crucial moment in the development of western law. Although its general exposition of Melanchthon's position does not differ significantly from that of John Witte, Jr., its focus on the natural law features of Melanchthon's thinking lends it a different accent.[2] Because the book is so narrowly constructed, however, the author neglects some opportunities to draw connections to the results of related secondary literature in areas that touch upon her research, but which she did not consider essential to her treatment of its theme. This decision is particularly unfortunate in light of Jens-Martin Kruse's work on the intellectual cross-fertilization of theologians of the Wittenberg circle; one of its most important methodological consequences is our new awareness that studies of the main theologians of the Wittenberg Reformation and particularly those that treat the period to 1522 should increase their sensitivity to the intellectual context of ideas between different thinkers.[3] Such comparative references are too scarce in this book. So, for example, it is troubling that when Deflers briefly discusses Melanchthon's notion of the "golden rule," a preliminary step to the formulation of the natural law concept, she omits a comparison to the provocative work of Antti Raunio on the role of this concept in Luther's work.[4] Neither does she contextualize Melanchthon's evaluation of the Twelve Articles in Robert Kolb's study of the nature of Protestant theologians' responses.[5]

Because of the narrow boundaries of the study, the book confines itself to making gestures in the direction of the meaning of its results for larger themes. This intentional limitation of the contexts in which the research might take on additional meaning makes the book's results rhetorically less vulnerable to criticism, but for readers outside of the legal history field, many of its conclusions will seem primarily suggestive rather than definitive.

[5] Robert Kolb: The Theologians and the Peasants. Conservative Evangelical Reactions to the German Peasants' Revolt, in: Archiv für Reformationsgeschichte 69 (1978), 103-131.