Lee Palmer Wandel: The Eucharist in the Reformation 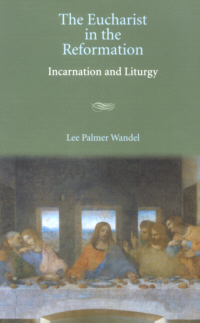 While Lee Palmer Wandel's latest book is erudite, much about it is surprising. Aspects of it are as provocative as her previous analysis of Basel's Reformation-era iconoclasm in light of Carneval. [1] It doesn't cite the secondary literature one might expect (Susan Karant-Nunn on ritual, confessionalization literature on cross-confessional comparisons, Bernard Roussel's students on cultural anthropology of the sacraments, among others). Instead, she states, almost immediately: "I have sought instead to bring forth a series of sixteenth-century voices, their own formulations" (11). The book conforms to the allegiances of her earlier work in its sympathies for the common man and its dismay toward religious traditions that exclude, discipline, or divide. [2] Its concern with the intersection of religion and ritual moves in the mainstream of recent research (influenced by anthropology) in history and religious studies. Still, by addressing theological categories in anthropological terms, the book takes a step toward addressing a burning problem: the future of theology as a tool of critical analysis in Reformation history.

The book compares the liturgical and ritual development of the Eucharist in the Reformation's three major confessions. Chapter 1, a well-formulated survey of "The Eucharist to 1500," sets the stage strongly (with dramatic, visual and aural detail) for the later narrative. The next chapter discusses the Eucharist in Reformation Augsburg; three later chapters detail how the Lutheran, Reformed and Catholic (Tridentine) traditions addressed dilemmas created by the early Reformation. Readers will react to these chapters differently depending on their preparation. Some may be concerned that the introductory chapter omits a discussion of the powder-keg issue of the fifteenth century: Hus and impanation. The Augsburg chapter shines as a discussion of the spatial, popular and polemical contexts of the Eucharist there, but does not expand our theological awareness, a problem that continues into the chapter on the Lutheran Eucharist (a difficult topic). Here the flattening of contemporary theological terminology in favor of categories extrapolated from the ritual's words of institution makes it hard to understand why the issue was so touchy or to follow precisely why (as she correctly notes) Lutheran theology resonated so differently in various communities. Wandel devotes half of the "Reformed" chapter to Calvin, about which I cannot bring myself to quibble - she packs extensive material into a readable, convincing discussion with a gratifyingly coherent presentation - but I was unconvinced that Calvin's judgments were autonomous of the prehistory of these discussions and Helmut Gollwitzer's work made me mourn the neglect of Reformed debates with Lutheran theologians. The decision to end the Lutheran narrative by 1555 becomes troublesome, as subsequent Christological controversies affected both confessions. In the "Tridentine" chapter, I was intrigued by the treatment of the ritual in the context of Roman art, but tantalizing connections to its colonial reception might be too brief for Latin Americanists.

Any book that covers so much territory will be vulnerable to nitpicking; no book can do everything. The more significant - albeit implicit - statement here is methodological. Wandel's ritual analysis throughout should elicit approving nods from cultural historians; subtle descriptions point us to things we may not notice - often absences - without marking. But the theological analysis is subsumed into non-theological categories. The pesky little confessional theologian who perches on my shoulder grumbled all the way through, especially when he saw the word "consubstantiation" (a term whose application to the Lutheran Eucharist is not uncontroversial). I fear the categories used in the "Lutheran" chapter ("presence," "body," and "real") will be too much of a stretch for theologians to accept, but we should not reject all of them on that basis: Wandel's discussion of "light" as transformed in Reformed spaces intrigues. While this is shaky terrain for historians to negotiate, it, like body, is an Ur-Christian metaphor, a place where anthropological and theological language intersect. Despite my theological preoccupations, I can't help but respect the project of making the Reformation relevant to these interdisciplinary concerns.

My bifurcated reaction merits closer examination for its suggestions about the growing estrangement between North American theologians and cultural historians. Reflection suggests a spectrum of responses to Wandel's analysis. We might object that assigning new categories to liturgy's shared terminology, while allowing a comparison, blurs precisely the terminological differences that signaled the period's key theological ruptures. While the book quotes sixteenth-century voices at length, we might object that the decision not to describe them in sixteenth-century terms prevents Wandel from pursuing her declared strategy. In light of recent objections to theory in Reformation history [3], we might insist on reproducing language exactly to reconstruct the atmosphere of the period - but this approach is hampered by our inability to read sixteenth-century categories on their own terms. On the other hand, we might celebrate the comparative potential these categories open up even as they disable the confessional terminology that created the divisions in the first place. The basic question that must be answered is whether we gain more analytical purchase or communicative effectiveness by employing such categories in our research than we lose: either in terms of potential literal faithfulness to the constituents who wrote our sources - or by neglecting to root our research in almost five centuries of theological scholarship. We may jeopardize the ability of historians and theologians to speak together about one topic. We may gain the possibility for a cultural anthropology of theology, toward which Wandel takes intriguing initial, if sometimes problematic, steps here. Another potential gain, as Wandel's too brief conclusion shows, is a sharper awareness of surprising cross-confessional similarities. I wished especially that she would have argued more explicitly that such analysis may open up the reasoned, sympathetic discussion of the Eucharist from the perspective of the believer to comparisons in historical anthropology that might increase the Reformation's interdisciplinary relevance - that notions of purity, illumination, presence and body could be carried back to the anthropologists that inspired this approach and that Christian theology could become one of their major concerns.

Wandel employs cultural categories to discuss the Eucharist in terms intelligible to non-specialists and at least potentially sympathetic to some lay readers. Chapter 1 should be recommended to all readers, especially students. As far as the book's undercurrents for scholars, especially those wondering about the role of theology in Anglophone Reformation studies, my own mixed reaction suggests that a book can make its most thought-provoking contribution to debates upon which it does not comment explicitly.

[2] See, for example, Wandel's earlier Always Among Us: Images of the Poor in Zwingli's Zurich, Cambridge 1990.