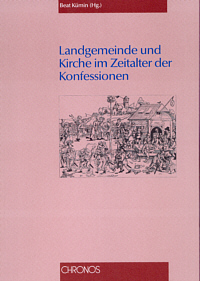 The lives of the vast majority of early modern Europeans were conducted primarily on the local level, i. e. primarily within the parish. Kümin, well-known as the author of an important study that demonstrates this point, has been involved in a series of projects emphasizing the importance of this neglected theme in Reformation history. [1] In his introduction to this collection of solid detailed essays on rural parishes and communes, he asserts that one constant in the ever more complex history of the Reformation we are beginning to discern is the consistent influence of parishes and rural communes (15). In particular, this view is intended to counteract the hegemony of certain versions of the confessionalization paradigm, which at first overemphasized the top-down quality of the Reformation. The period between conception of a collection, publication and review is long; debates over the degree of "statism" inherent in the confessionalization paradigm were taking place in 1998 and probably spurred these authors to frame their question in this way. Just recently, some historians have started to emphasize the lack of power that princely reformers had in exercising their prerogative of the ius reformandi. [2] At this point, many readers will already be sold on the collection's motivating issue: that a central perspective for understanding the reform of the church in the next generation will be that of the local, rural parish and community.

If they were not, however, this book would certainly convince them. Randolph C. Head, writing on Graubünden, isolates three distinct periods of parish life during the sixteenth and seventeenth centuries: the emergence of a communal orientation up to 1530, the height of the commune's powers from 1549-1600, and the growth of a confessional (over communal) identification after 1600.[3] In parallel to some recent literature on territorial state activities in pre-Reformation Germany, Head stresses that the commune was already moving to exercise parochial prerogatives before the Reformation. Communal decision-making structures also facilitated greater latitude in religious belief than previously suspected. Ulman Weiß describes rural communes in the Erfurt hinterland establishing the Reformation successfully by negotiating the spaces left between the demands of the Thuringian state, the city authorities, and the Archbishop of Mainz (who did not gain temporal power over the city until 1664) in their administration of local churches.

Walter Salmen, in a departure from the political and administrative focus of the first essays, discusses the culture of discipline that grew up around peasant dancing as a means of understanding the influence of communes on local life. The Reformation caused an increasing scrutiny of local festivals but did not succeed in eradicating local autonomy. Peter Hersche's essay, similarly leaving the path trodden by Head and Weiß, treats a fascinating subject that has been almost totally neglected in favor of discussing aesthetically-significant buildings: the construction of local churches. Hersche traces a growing divergence between such constructions in Protestant and Catholic areas relatable both to attitudes about such construction projects and different levels of demographic growth.

The final essays push the comparative perspective that Kümin's program calls for. First, Kümin's essay on English parishes substantiates an important point: that the problematic comparison between the English and German Reformations is only meaningful in the context of parish-level examinations, where indeed similar conflicts and discussions occurred in both regions. Based on church wardens' accounts, Kümin is able to provide convincing evidence that suggests that with a brief interruption, the sources of parish income remained steady over time. One wishes that the insufficient source basis had not prevented other authors in this volume from presenting similar data. In light of the wardens' accounts, local acquiescence to theological changes is England is read as an attempt to maintain local control over the parish. In the final essay, Petr Stefanovitch argues that Russian parishes were similar in structure and function to those of western Europe, with similar notions of communal religious practice and memoria. Structures of parishes, including cloisters and administrations, were also similar. He suggests that the emergence of a separate word for "parish" (prichod) indicates that the connection between a communal district as a primary governmental unit and the pastoral supervision of congregants was breaking up by the fourteenth century. Most of this volume's likely audience will lack the expertise to evaluate this claim effectively, but those familiar with secondary literature on differences in peasant political and taxation status across western and eastern Europe will find themselves wanting to read more about the formal position of Russian peasants in such arrangements before accepting Stefanovitch's claim.

The quality of these compelling contributions notwithstanding, we are left asking what common elements the larger story we are to tell on the basis of their results includes. The comparison would have been enhanced by the example of a Catholic village; as Kümin's essay recognizes, Marc Forster's work on the Speyer region is suggestive in this regard. [4] A closing essay that drew more explicit comparisons between the contributions would have been useful; many readers may have an orienting background in the comparative studies of peasantries more common a generation ago, and tying discussions of religious life to such comparisons would have facilitated my assimilation of the volume's arguments. More importantly, such an essay could have addressed the question of whether an understanding of the macrocosm "Reformation" can be created from a picture of the parish, writ large. If so, how? Kümin is more optimistic than I about a new consensus. Reading the book makes me think that the opposite seems true: a "constant" as general as the centrality of rural parish communities only enhances the reader's perception about how almost all meaningful early modern history is local in orientation: not "Reformation," then, but "Reformations." But noting that it will soon be necessary for historians to increase the complexity of our picture is hardly a burden; on the contrary, Kümin's volume convinces us that it will be a pleasant sort of complication.