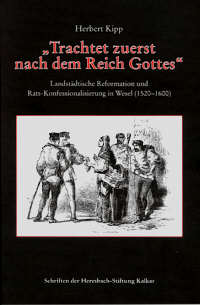 The published version of Herbert Kipp's dissertation deals with the course of the Reformation in Wesel and demonstrates an unparalleled familiarity with the relevant documents. On the basis of a decade of research in the relevant archives, Kipp provides a relatively conventional picture of a "Rats-Konfessionalisierung" steered by the Wesel city council. The city moved only hesitantly toward evangelical practice after 1524, due to periodic (albeit inconsistent) warnings from territorial sovereigns about heterodox elements in the city and the calculated and effective holding action of particular members of the Old Church clergy, like Anthon von Fürstenberg, the chaplain at St. Willibrord Church. After 1540, the city officially introduced Lutheran practices, but the first Reformed refugees arrived in 1544, and their general penetration into the social fabric and government of the city was not to be stopped - not least because of their profession of textile production, which they brought along with them. Despite the demands of some of its members, the council failed to install a Gnesio-Lutheran city confession in 1561 that would have demanded the expulsion of the newcomers. Hence the city was informally Calvinist (for example, in the pattern of election of its city councilors and the influence of Reformed congregational consistories on society at large) at least a generation before the official institution of the Reformed Church in 1612. Nothing about this picture is surprising, but Kipp's comprehensive examination of the surviving documents adds detail and nuance to our knowledge of the sixteenth century there. In particular, interesting details of local devotional customs that appear unique to the area are inserted into the discussion. The descriptions of what happened in local cloisters are also fascinating in the information they reveal about how evangelical ideas penetrated their walls or what they explain about how convent life was conducted when the size of the community shrank significantly.

The strengths of Kipp's book, which lie in its detailed attention to archival minutiae, are unfortunately overshadowed by a number of fairly serious problems, most of which can be described with the label "missed connections". The first of these is the author's inability to make connections with the larger world of the Reformation. Surprisingly, considering the book's topic, the author demonstrates only a superficial knowledge of the content and influence of evangelical theology. The standard by which the progress of the Reformation is judged is by comparison to Luther's theological ideas or practical programs; for instance, the introduction of congregational singing in 1542 is described as having finally sufficiently fulfilled Luther's demands (231). This approach is somewhat simplistic considering the amazing theological diversity of the German lands bordering on the Low Countries and the later turn of the city to the Reformed confession. What was the currency of the ideas of the Swiss Reformation in this community, and did it set up any predisposition to the ideas of the refugees? Occasionally anachronistic terminology is used that is perturbing from the perspective of the theologian (for example, the characterization of Lutheran Eucharistic ideas as a "Konsubstantiationslehre", 232), or clearly embracing of a particular confessional perspective (the automatic, unquestioning equation of Philippist ideas with "crypto-Calvinism", 164). The author's lack of familiarity with the evangelical landscape of the time is displayed, for example, by his characterization of Jakob Andreae as "noch lutherisch" in 1568; there can hardly be any doubt that this co-author of the Book of Concord remained Lutheran until his death in 1590. The failure of the book to connect with this larger picture, particularly after the Interim, leaves interesting questions about incipient Lutheran confessional and ritual developments unanswered: for example, why do ecclesiastical garments first come to debate in 1559 in Wesel (a decade after adiaphora were at issue in Saxony)?

Formally, the organization of the material presents large problems for the reader, particularly to anyone not already familiar with the Reformation in Wesel. Kipp fails to provide an overarching narrative, so that the course of the Reformation is presented repeatedly as it occurred in the setting of each local church, cloister, confraternity, and institution, and from each confessional position. Thus, for example, the author asserts relatively early on that the series of trials against local Anabaptists in the wake of events at Münster constituted a turning point in the development of the local Reformation, but only much later does the reader find out anything - although not very much - about those events. Kipp thus takes readers who read the entire volume through the Reformation multiple times in sequence, but in the end, the details overwhelm the general picture. Here the missed connection is an internal one; it is extremely difficult to obtain an idea from Kipp's fragmented picture of the city how the different parties to the religious settlement actually interacted with each other, or what the governing dynamics in these interactions were.

As a consequence of this strategy, the author ends up abdicating the responsibility of the historian to provide an overview that makes the book more than the sum of its archival components. It would seem, for example, that the story of religious refugees would have to be placed at the center of such a narrative, but Wesel's constant stream of visitors is only examined briefly and tangentially, with a final consideration of the progress of Reformed confessionalization and the fate and influence of the religious refugees - arguably the most decisive aspects of the Reformation in Wesel - limited to the last thirty pages of the volume. Thus the largest missed connection in the book is to the historiography on political developments in the region. After a cursory reference to Heribert Smolinsky's encyclopedic presentation on the territories of Jülich-Kleve-Berg, [1] in order to argue that Wesel's Reformation was heavily influenced by the failure of the local territorial sovereigns to enforce a confession, and some discussion throughout of relations with the Cologne diocese, the matter of connections to larger developments in the region or the empire is abandoned. Although it would have been impossible for Kipp to have consulted an American dissertation (completed almost simultaneously) on the matter of whether the Wesel Reformation "turned Dutch", [2] it is remarkable that the question of Wesel's relationship to the developing tensions in the Low Countries is so noticeably neglected.

In light of these problems, it will be difficult for many readers to accept Kipp's conclusions about a "Rats-Konfessionalisierung" in Wesel without further evidence. In general, it is difficult to get any picture of confessionalization in Wesel beyond the author's emphasis of developments from the picture of governing authorities. Kipp's book will be most useful to scholars and readers searching for detailed local information about events within particular micro-settings and -contexts in the city itself. It might also be read as an extended annotated commentary on the archival documents that will be a useful guide for those preparing a future synthesis or monograph on the Reformation in Wesel.