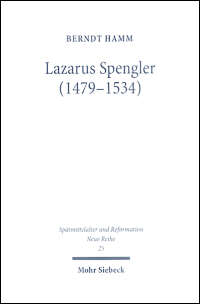 This volume, a collection of (mostly) previously published essays, is intended as a guide to the social, intellectual, cultural and personal context of the Spengler critical edition project, which has completed two of its projected four volumes. [1] In ten essays, Hamm treats the social context of Nuremberg humanism in its turn toward the Reformation, Spengler's relationship with Dürer, the matter of the diversity or coherence of the early Reformation, the extent to which the Nuremberg Reformation can be seen as the religion of burghers, the city-church relationship in Spengler's eyes, Spengler's activities as a legal thinker, the effect of the Reformation on burgher values in Nuremberg, Spengler's confession of faith as an act of devotion on the cusp between late medieval and Reformation piety, and the Reformation as "normative Zentrierung". Considering that scholarly collections will already house many of these essays, it is legitimate (in our age of diminishing book budgets) to question the necessity of adding this volume to them. Careful examination of the volume will quickly persuade the reader, however, that this volume will be indispensable to scholarly collections in Reformation and church history.

The individual contributions to the book are of high quality. The final essay on "normative Zentrierung" is widely known as a tour de force of innovative scholarship. While it draws central themes from the book together and serves as a fitting conclusion, I would have appreciated a more explicit addition to the essay that focused more closely on how Hamm sees this process working in the concrete context of Nuremberg. The only new material in the volume is the second essay, on Spengler's relationship to Dürer, inspired as an answer to Karl Arndt's and Bernd Moeller's recent extended essay on the Nuremberg Vier Apostel altarpiece, which argues that Spengler exercised an important influence on Dürer in its conception and execution. [2] Hamm does not so much disagree with this argument as much as provide a series of subtle interpretive correctives, pointing out the genesis of the altarpiece in the context of the patriciate's humanist piety. An essay on the diversity of the reception of Luther's ideas in the early Reformation uses the dichotomy of scholarly ideas about this topic (Franz Lau's "Wildwuchs" in comparison with Bernd Moeller's "lutherische Engführung") to provide a typology of readings of Luther that points out the associations between certain political and theological positions that correspondingly limited the number of readings of Luther that were possible. My favorite essay in the volume is one that points to the persistence of late medieval religious values and piety in Reformation genres using the example of Spengler's personal confession of faith and the transformations in its form and content. Apart from their individual contributions, however, the essays work together as well, not least because footnotes have been added that effectively cross-reference them to each other. Because the most recent scholarly biography of Spengler was published in 1934, the book in its updating of the context in which we now understand Spengler's activities functions as a preliminary move in the direction of the modern scholarly biography that Hamm's eager audiences hope will be forthcoming when the edition is finished.

Readers not already familiar with Hamm's oeuvre should be careful: the writing is so smooth, convincing and even soothing that it is easy as a reader to find oneself transported into Hamm's vision of sixteenth-century Nuremberg. It's a pleasant journey, but one with definite priorities, for providing a context for Spengler's biography of necessity also means writing the outlines of a Reformation history. Hamm's view of the advent of the Nuremberg Reformation as seen from Spengler's perspective is clear: a gradual move from the late medieval concerns of burgher religion with its affinities to the precepts of humanism, which in turn created a somewhat broader "Staupitz craze". Large portions of the membership of the Nuremberg elite turned their gaze, as Hamm puts it so succinctly, from Jerome to Augustine. But as he notes, this was a move that significant notables like Willibald Pirckheimer did not make (61) - in his eyes a regrettable separation rather than a real conflict. We thus see here Caritas Pirckheimer who attempts to persuade the city council to leave her cloister in peace and not the nuns who helplessly watch when the Nuremberg patriciate comes there to retrieve its daughters: rhetoric rather than turmoil - even if Hamm does point to a "crisis in social values" as a consequence of the Reformation. Those with scholarly commitments to a conflict view of urban history may be uncomfortable with a canvas of Nuremberg in which patrician disputes (or disagreements with the decisions of the Rat) read as difficult but unfortunate intellectual disagreements rather than open political conflicts and in which the city's well-known polemical printing plays a subdued role. At the same time, however, the focus on taking the subtle varieties of burgher religion, humanism and early evangelical thinking seriously in their own right allows Hamm the ability to create a picture of thinking about the Reformation in a particular urban context that is unusually vivid and nuanced and which provides a strong contrast to the advent of the territorial Reformations that have gotten so much attention recently because of interest in confessionalization. And the study of the relationship between burgher religion, humanism and Reformation is a valuable reminder that humanism was not merely an idea divorced from the gritty contexts of politics and economics; on the contrary, in Nuremberg, humanism mattered both socially and politically.

The volume closes with an edition of the Spengler family's Wappenbüchlein by Gudrun Litz, an ongoing editor of the project. The text is meticulously footnoted, heavily annotated and frequently commented, so that it would serve particularly well as an introduction to the genre for graduate students or other novices. As with the source quotations in Hamm's essays, editorial interjections inform the reader at moments where the language is less than transparent. Its content underlines effectively a point not treated in Hamm's excellent opening essay on the Nuremberg patriciate, but which should be added as a factor to Spengler's world-view: wealth and education could not protect anyone from the shattering mortality rates of the period.