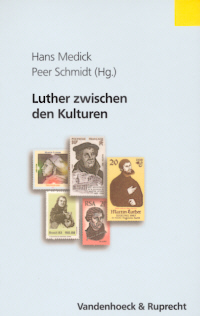 This volume assembles papers from a 2001 symposium marking the 500th anniversary of Martin Luther's matriculation in Erfurt (1501). It avoids actual discussion of Luther's matriculation (about which little remains to be said). Instead, after an introduction by the editors, the book is divided into sections on sixteenth-century reception of Luther, perception of the Reformer in America, "the global Luther" (reception among German Jews, Muslims, orthodox Christians, and indigenous populations in Africa, China and Australia), Lutheranism in the modern world (which, with a slight detour through Anglophone realms, really means "Germany"), and twenty-first century theological perspectives on the Reformer. Obligatory remarks about the diffuse character of conference volumes and the uneven quality of their essays aside, the general impression the book leaves is that Luther and Lutheranism have been significant in realms that many people, even many scholars, don't anticipate.

The first section of the book (reception by contemporaries) will be of interest to early modernists of all stripes - not just Reformationists - as it focuses on Luther's interaction with and reception in his social, political and cultural world. Peter Burschel's essay on Catholic images of Luther covers, with energetic prose, the major topoi of Catholic perceptions of Luther in early modernity. Jay Goodale provides the most original essay of the volume, treating indications of Luther's reception of the "common man" via visitation records, asking not only how Luther's actions (and those of other visitors) affected average folks, but also how such interactions gradually changed the Reformer. Susan C. Karant-Nunn approaches a familiar theme in a novel way, considering surviving traces of Luther's attitudes toward wife and family within the frame of notions of the Reformer's masculinity; the essay effectively sheds new light on stereotypes about Luther's status as a hearty family man. Thomas Brady discusses eruditely the extent to which Luther offered a challenge to the Reichskirche, revealing again his broad command of political and ecclesiastical history across the medieval-early modern spectrum. The section concludes with an essay by Mark Edwards recapitulating the argument of his monograph, Printing, Propaganda and Martin Luther [1], about sixteenth-century perceptions of Luther based on publication.

As Burschel's essay reminds, it is unsurprising that Luther served his contemporary opponents as the image of everything out of synch in the world, but two fascinating essays in the next section (by Alicia Mayer and Peer Schmidt) trace the ways in which this "monster" image was exported to Mexico: first (so Mayer), in oppositional tandem to the Virgin of Guadalupe, and later (so Schmidt), as a Feindbild to support early nineteenth-century Mexican ideas about Catholicity and bids for independence. René Geertz presents a contrasting view of Lutheranism's significance in the Catholic "New World" by reflecting on the role of Lutherans in Brazil (where, although Lutherans constitute only a miniscule minority among a tiny Protestant community, one of the country's largest universities is a Lutheran one); he raises a number of interesting but only diffusely related points. Jon Gjerde and Peter Franson conclude this section with a piece on the development of American Lutheranism emphasizing the interaction of German and Scandinavian notions of obedience to God with nineteenth-century ideas about freedom in the United States.

The third section opens well. Christian Wiese's essay on Jewish perceptions of Luther from Heine (a fan) to Leo Baeck (not a fan) recapitulates arguments he has published elsewhere, but this story - of Jews negotiatiating views of Luther as a component of identification with Germanness in the bourgeois project vs. growing awareness of Luther's anti-Jewish sentiments - bears re-reading. In contrast, the book's two least interesting essays are those on Luther's relationship with Islam (Hartmut Bobzin) and Muslim attitudes toward Luther (Jan Slomp). Bobzin says nothing new, which is particularly disappointing in light of numerous recent studies on early modern Ottoman-German interactions; and Slomp's remarks (on modern Muslim scholarship's awareness of Luther), while interesting, are disorganized, giving little sense of the topic's potential significance. The section closes with a programmatic piece by Gregory L. Freeze arguing against the thrust of modern historiography both that the Orthodox Church was influenced by its interactions with Lutheranism but that Lutheranism itself had a limited effect on the Orthodox Church. Vasilios N. Makrides characterizes the lack of a Reformer like Luther in the Orthodox Church as symptomatic of its lack of a reforming tradition and conceptions of the Orthodox tradition as one of continuity.

The section on reception of Luther and the Lutheran Church in Christian mission is the most intellectually focused section of the volume. Its most successful contributions focus on whether Lutheran-indigenous contact can be said to have any particularly Lutheran qualities. Though it wavers from considering this problem, Jacqueline van Gent's essay on Australian indigenous-Lutheran missionary encounters includes interesting detail about the Arrernte and their negotiations (especially around food and work). Kirsten Rüther concludes that despite separatist grumbling by missionaries, little about South African mission was specifically Lutheran, though interestingly, local populations turned to Luther as a source of resistance when they sought independent from the missions. Thoralf Klein considers the contrasting activities of three Lutheran missionaries in China, concluding that their Lutheran identity (often but not always influenced by pietism) did not prevent contrasting approaches both to mission activity and ideas about the extent of Christian tolerance for indigenous traditions. The section closes with Theodor Ahrens' essay on competing Lutheran missionary strategies in Papua New Guinea. It makes an excellent conceptual point: questions about the specifically Lutheran qualities of missionaries incorrectly reify a definition of quintessential Lutheranism. A complex picture emerges here, not simply of missionaries passing on Christianity but local populations using their Christianity to negotiate their relationship with missionaries. Many of these essays, however, focus on the results of cultural transmissions from missionaries to natives; one wishes that some of these authors had used Ahrens' caution about reifying notions of Lutheranism to focus more on what studying missions tells us about Lutheranism.

The volume's turn to modernity focuses on modern theological reception of Luther in political and social contexts. In his essay on the contrasting reception of Troeltsch's interpretation of Luther in the Anglophone and Germanophone intellectual worlds, Thomas Kaufmann makes the interesting suggestion that fundamental rejection of Troeltsch's ideas by the most influential German theologians made it difficult to discuss the matter of Luther's alleged teachings of obedience to sovereigns, while uncritical acceptance of Troeltsch in Anglo-America led to bizarre excesses in the post-World War II era, in which authors like William Montgomery McGovern traced an unbroken relationship between the Reformer and National Socialism. Christian Albrecht's subtle essay on reception of Luther in the heightened nationalist atmosphere of 1917 points to surprisingly liberal strands of Luther-commemoration, demonstrating important ways in which even apparently univocal commemorations involve negotiations with other (sometimes explicit, sometimes implicit) imaginings of the past. Hartmut Lehmann offers an overview of Marxist receptions of Luther; its end is less interesting than its beginning, which treats the less familiar matter of such interpretations before the GDR. His brief remarks on Friedrich Engels and August Bebel are worthwhile reading.

No volume on Luther's influence could be complete without a theological debate, provided here by Joachim Wanke and Dorothea Wendebourg on the extent of Luther's "reform Catholicism." Uniquely in a discussion with clear scholarly antecedents, both authors turn to matters of contemporary practical utility. Wanke uses Luther's catholicity to argue, in the face of growing de-Christianization, for the figure's potential to unite Protestants and Catholics in Christian revival. Wendebourg, in contrast, stresses that despite the needs of the present, notions of the Reformer must be faithful to the actual past, in which Luther had to become a reformer because he was not allowed to remain a Catholic. The volume ends with Gregory Baum's treatment of the extent to which modern Lutheran theology in Latin America supports a resistance theory.

This worthwhile volume's essays are most successful when they take seriously the preposition zwischen in the title; that is, when they examine the image of Luther or the premises of Lutheranism as matters for negotiation between propagators and recipients. Admittedly, most historians working outside of social history have not examined these questions very carefully, but focusing on reception necessitates at least some consideration of this problem. Precisely these interactions point to the inadequacy of concepts such as "veneration" of Luther, because, as many of these essays reveal, even the most pious devotions involved subtle debates between the potentially oppositional attitudes that arose toward this most notorious of German historical figures.