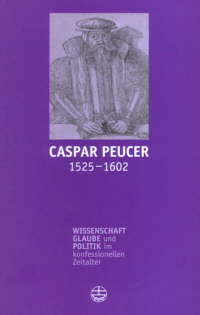 This volume is comprised of fifteen revised conference papers from a colloquium held in conjunction with the millennium anniversary of the city of Bautzen and the 400th anniversary of Peucer's death in 2002. It also includes an essay on the city's new Peucer monument and a bibliography of Peucer's printed works. Its apparent justification is primarily as a record of the conference. The disturbing tendency toward the production of essay volumes on individuals for whom a scholarly biography is a pressing desideratum made me wary of the book - unnecessarily in this case. Taken together, the volume's essays provide a useful portrait of the sixteenth-century scholar Peucer, whose studies and teaching brought him in contact with philology, natural philosophy, astronomy, theology, medicine, and even history across the course of a productive career unfortunately cut short when he was accused of crypto-Calvinism and imprisoned for over a decade. Notwithstanding Joachim Castan's brief attempt to re-envision the post-imprisonment phase of his life near the end of this volume, Peucer's relief at his release must quickly have given way to frustration with the circumstances.

Günther Wartenberg provides a brief biography of the different life stages of this favorite son of Bautzen's Reformation that provides basic orientation to readers unfamiliar with Peucer's career. Ulrike Ludwig traces just as concisely Peucer's career at Wittenberg, from his immatriculation in the arts faculty in 1540 to his assumption of various posts and lectureships there (mathematics, astronomy) under the influence of his father-in-law, Philip Melanchthon, and Elector August, until 1560, when he came to the medical faculty. His lectures about Carion's Chronica were so important that his former colleagues sought to retain him even as he was being interrogated about his theology after 1574. Martin Roebel describes the basic features of Peucer's medical ideas, which formed under the humanist rediscovery and subsequent critique of the great classical authors. This essay and the following ones by Wolf-Dieter Müller-Jahncke and Michael Weichenhan on Peucer's astronomy and astrology make clear that the study of late sixteenth-century theology at Wittenberg is not primarily antiquarian esotericism but lays bare the decisive role these scholars played in the developing direction of early modern science and natural philosophy. Robert Kolb weighs in on Peucer's Eucharistic teachings, an important issue since one aspect of crypto-Calvinism was its alleged teaching on the real presence. Kolb does not provide a definitive judgment on this problem, but does suggest that Peucer had gone beyond Melanchthon's understanding of the Lord's Supper, under the influence of metaphysical ideas from the classical period whose examination he suggests would be a productive area of future research. The highlight of the volume is Hans-Peter Hasse's careful analysis of Peucer's trial in light of his own account of the process, the Historia carcerum. Hasse considers Peucer's collection of documents and statements about his imprisonment in the context of contemporary legal assumptions and narrative influences. As Peucer's 854-page statement is perhaps the major source for the study of a much larger phenomenon of political persecution in the context of Lutheran confessionalization, Hasse's reflections on the book will be fundamental to future research. Jens Bruning traces the twists and turns in Peucer's relationship with August. Peucer enjoyed the trust of the family, serving for several years as their personal physician, until his openness to Calvinism in his advice about foreign policy began to collide with August's own anti-Calvinism.

At this point the volume turns to Bautzen, with a short piece by Uwe Koch on the Peucer family history in that community that illuminates the family heritage in the city's elites and explains the social background that prepared Peucer for such an illustrious career. Hagen Schulz provides a splendid essay on the history of Bautzen, reminding us that Peucer's fall at court was paralleled in the experiences of the city and its hinterland. A burgeoning, growing area of political and economic interest from the late medieval period throughout the height of the Reformation, Upper Lusatia was punished for its alleged transgressions in the Schmalkaldic War via the Pönfall, an enforced settlement in which the Holy Roman Empire revoked all of the privileges of the local cities, sending the area into a severe crisis that was only beginning to abate as the Thirty Years' War broke out. Instead of emphasizing the uniqueness of the area, as is typically done in much of the literature, Schulz points out its typicality and outlines its history by tracing Peucer's own comments on the developments of the sixteenth century, which stress contemporary interrelationships.

The concluding essays in the volume, while adding significantly to our picture of Peucer, are awkwardly placed and read like a postscript. Nicole Kuropka analyzes Melanchthon's correspondence with Peucer - a theme with a limited albeit interesting source basis, since the two men spent most of their time together in Wittenberg - showing that Melanchthon's support of Peucer was due to a true intellectual relationship and not simply family networking. Heinz Scheible, in an essay that illuminates many of Jens Bruning's claims, elucidates Peucer's relationship with the Palatinate via the entertaining gambit of explaining why some of Joachim Camerarius' letters ended up in the Vatican Library. Doris Teichmann's valuable work on Peucer's activities as linguistic liaison to the Bohemian Brothers, like Schulz's essay, re-animates the reader's sense of the central European connections so self-evident in the sixteenth century but so obscure in the meantime. Rainer Kößling's penultimate contribution is the only author here to address a theme we more typically associate with humanism than medicine, namely poetry, in his rehabilitation of Peucer's Idyllium Patria, a poem praising Upper Lusatia. Ophelia Rehor closes the essays with a brief contribution on sixteenth-century depictions of Peucer as they fed into the construction of the city's new monument. Jürgen Hamel and Martin Roebel conclude the volume with a bibliography of Peucer's printed works as they are known to us now, usefully turning up a few items not included in VD 16.

All in all, this volume is a valuable read that emphasizes the crossing of disciplinary boundaries and the relevance of the political and social background to understanding the intellectual contributions of a sixteenth-century polymath. To some extent, the more traditional aspects of those contributions receive short shrift - it would have been intriguing to read more about Peucer's studies of Carion, or of philosophy and metaphysics. On the other hand, the subjects chosen successfully stress the relevance of Peucer's career and the centrality of the Bautzen region to developments in sixteenth-century political and intellectual history in a way that the publications relating to the 2002 Zittau exhibition on the Habsburgs in Lusatia did not. The multiple essay format does lead to a good deal of repetition, both in the text of the contributions and in the footnotes; for example, readers are treated to several different accounts of the crypto-Calvinist affair in Wittenberg and multiple retellings of Peucer's activities at Wittenberg. The order of the essays is not entirely transparent, with Schulz's important and refreshing contextualizing piece about sixteenth-century Bautzen in the middle. But the high quality of the essays and the interesting material they present more than compensates. It is to be hoped that this volume will serve as a spur to Peucer's potential future biographer, or to a scholar who will write a definitive and modern history of crypto-Calvinism in Wittenberg. Even absent such results, this satisfying volumes suggests that Peucer will look back on this anniversary of his death with contentment from the heavenly academy that Melanchthon assumed he, his fellow scholars and his students would occupy.