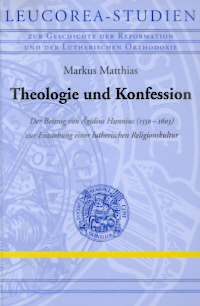 As its energetic introduction indicates, this study of the late Reformation theologian Hunnius - known for his (unsuccessful) defense of the Formula of Concord in Hesse - seeks answers to the vital question of the development of the culture of Lutheranism in the period of "orthodoxy". Justly critiquing the research that uses the term "confessionalization" without considering where confessions originate or employs the term "confession-building" to functionalize confession rather than considering the meaning of confessional specificities, Matthias seeks to understand theology in its relationship to early modern religion as a "sinnstiftende Ausdrucksgestalt menschlichen Lebens" (18). The author helpfully re-characterizes the age of orthodoxy as one of taming the evangelical theological heritage for employment and transmission in churches. On this view, theology not only takes a central role in determining the consistency of forms of religious expression, but should be considered in terms of its role as a rational approach to the transcendental (rather than for its social or cultural effects). This is how the Reformers understood their task in formulating theology, Matthias notes, as a complete approach toward religion rather than an immersion in individual loci for their own sake. Hence by viewing their theological constructions as being about religion rather than about dogma, we can understand the steps of Lutheranism toward developing its own particular confessional culture.

In six chapters, Matthias considers Hunnius' theological education at Tübingen (significant to understanding his predisposition to defending the Formula of Concord), his call to Marburg in the context of Hessian church politics, his teaching on predestination, his Christology, its effects on his ideas about the conduct of church life, and the reasons why the Hessian church did not embrace the Formula of Concord (doing so would have split the territory religiously) and Hunnius' consequent firing from the Marburg theological faculty. The narrative sections are heavily dependent on Heinrich Heppe's nineteenth-century presentations of Hessian church politics, although Matthias does illustrate them with significant new archival material. The work as Matthias organizes it is a mixture of a number of traditional elements of biography, traditional historical or systematic theology, straightforward ecclesiastical history, and interesting or novel theoretical concerns (the theoretical chapter and some later material on what Matthias calls "religiöse Lebensformen" but might better be termed "incipient practical-theological concerns").

The idea of this organization is that the developing theological content, especially its Christology, decisively informed Lutheran religious life, but since this argument is difficult to falsify it is also hard to prove convincingly, not least because Hunnius' ideas about preaching, baptism, and church discipline seem so typically evangelical and no comparisons are made to the ideas of theologians (Lutherans or not) who did not share Hunnius' Christology. I was surprised, given the author's emphasis on Christology as Hunnius' central concern, that no section of the chapter on "religiöse Lebensformen" treated communion in any depth. It is unfortunate that Matthias leaves the reader hanging here (especially in the section on baptism, which is only thirteen lines long, of which all but three lines are source quotations), since his introduction implies that it is precisely in this section that we will see the specific ways in which a certain theology informed particular confessional conceptions of the forms of religious life (independently of social or cultural considerations). I find it doubtful in principle that a useful understanding of theology as an aspect of (religious) culture is possible without asking about the broader (extra-theological) contexts and intentions that informed its author in writing. However, Matthias rejects such a strategy (35) on the basis that Hunnius would not have pondered such issues. In fact, the structure of the book seems to suggest the relevance of social and educational influences on Hunnius, since it devotes quite some time to his path to the Marburg professorship in a way that suggests an interest in cultural history matters like habitus.

Moreover, while I appreciate his insistence on religion as a separate, independent aspect of early modern life - I agree heartily about the unfortunate tendency of confessionalization to functionalize the confessions - the author may go too far in implying that church historical studies have no answers to give to questions about confessionalization (16). Matthias' willingness to write off social historical approaches to the tasks of practical theology (pastoral office, preaching, curricula) as mere studies of "social disciplining" and thus too independent of an understanding of theological developments to be of aid in answering questions about the forms of religious life (and his peremptory dismissal of Thomas Kaufmann's important case study on Rostock) is exaggerated and unnecessary. He goes too far in the other direction by considering the ways in which Hunnius' Christology illuminated his concerns about practical theology without discussing how those concerns were actually fulfilled in contemporary ecclesiastical life. This top-down approach, independent of any lived context of religious life, seems to imply that it was primarily theologians who determined the forms of religious life in the later sixteenth century. Many readers - theologians among them - will disagree, suggesting not unreasonably that the act of living a religion is central to the creation of specifically confessional forms of religious life and culture. The one example Matthias gives of the relationship of theology to an event that actually happened in a church (a discipline of marriage case discussed on page 240) is commented so sparingly as to context that it is difficult to understand the details of the case, let alone why Landgraf Wilhelm bothered to interfere in it or how specifically confessional concerns informed the theologians' responses to it.

The most solid scholarly contribution the work makes is the lengthy (65 pp.) chapter on Hunnius' Christology, an inaugural contribution by Matthias in both detail and depth. Here the author makes completely clear why Hunnius would not have been able to compromise his beliefs even given the significant political and professional pressure placed on him to do so. In comparison with another recent work on Christology as an aspect of Crypto-Calvinism, Thilo Krüger's "Empfangene Allmacht" [1], Matthias' work is thus more effectively integrated into its larger political and theological contexts. Sadly it is much less friendly to the reader. Krüger's work reads primarily as an attempt (via systematic theology) to rehabilitate Heshusen, while Matthias clearly wants his book (which also involves an overwhelming emphasis on systematic concerns) to tell the reader something about the working relationship between theology and religion. Given his willingness to throw down the gauntlet in this regard, however, it is surprising that Matthias does not seek to ease the path through his work. Readers should take seriously the author's warning that the text reproduced here is that of his unrevised Habilitationsschrift (Halle-Wittenberg, 2002). Long unmediated quotations that belong in the footnotes are left in the text, often without explanations of confusing issues or the relevance of the citation to the argument. Individual chapters are sometimes introduced with numbered theses rather than contextualizing prose. The bibliography of Hunnius' oeuvre was a useful idea, but the decision to omit both VD 16 numbers and the locations of extant copies means that it loses a great deal of its practical value for readers who might want to plan a trip to the libraries that hold the works in order to read them.